What a 10 year old wants for Christmas... 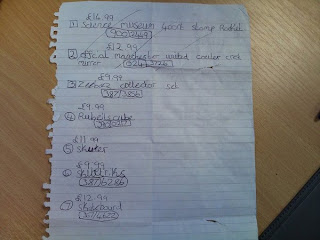 I found this "Cristmas List" stuffed in between the pages of my Filofax earlier today. This appears to be the next stage along from giving your child a pen and the Argos catalogue and letting them circle the toys on their wish list. I'm very pleased to note that Jake's spelling and handwriting is coming on a treat (he's just received his "pen licence" at school). It's a shame that Father Christmas will not be able to obtain everything on the list but he may replace it with other presents that are just as good, if not better. Please note the inclusion of the Argos catalogue numbers, for our convenience.
On the list we have:
[sic]
1. science museum 400ft stomp Rocket
(he won't be getting this - we live in a terraced house with no garden - yes, apparently the rocket will fly up to 400 feet in the air - no mention of the very upset child when the rocket does not come directly down into the arms of afore-mentioned child or, if you are using it in the local park, it gets stuck up a tree or a dog runs off with it.)
2. offcial Manchester United couler crest mirrer
(he will not be receiving this either. Football, pah!)
3. zeebeez collector set
(we have bought these - not sure what they do and there doesn't seem to be a lot in the box for ten quid. No instructions included but some vague directions on the internet about turning them inside out and waiting for them to "pop up". I wonder if they'll compensate for the non-appearance of the Stomp Rocket?)
4. Rubeits cube
(we'll probably pick this up at the weekend and also one of the other Rubik's puzzles)
5. skuter
(this is a much coveted present and we will have to get this, however, the only ones in stock ANYWHERE in the North West at the moment seem to be pink, or High School Musical themed, or not big/sturdy enough... well, there are some, but they are in the region of £40 *faints*)
6. skiletriks
(thanks to James May's Toy Stories the discovery of a number of old childhood favourites have materialised. I just wish we'd kept the scalextric that we bought for Michael years ago.)
7. skatebourd
(this is a no-brainer - already purchased. He's had loads of skateboards and loves them)
On the back of this note is a "cristmas list" for his brother. He has guessed what his 16 year old brother wants for Christmas and written it down. It has one item on it with just the Argos catalogue number - it's good that Argos has a website, really because I sure as hell wasn't going to search through the whole book looking for it. So it looks like Michael is going to be getting a docking station for his X-Box controllers.
Jake also told us (fairly discreetly, just in case anyone was listening) that he still believes in Father Christmas but he may not do next year when he goes to high school...
family