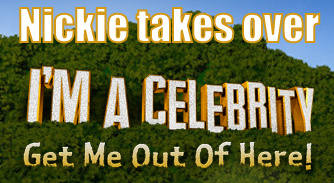 Last week I saw a tweet scroll past from the "I'm A Celebrity Get Me Out Of Here" team asking for Skype callers for their ITV2 show. Being a huge fan of the show I whizzed off an email and thought nothing more of it.

Yesterday evening, my mobile buzzed with a really strange number. Forever inundated with cold calls, I googled the number, only to find out it was an Australian code.  My interest piqued so I hit the voicemail button.  It was the lovely Maisie from the I'm A Celeb ITV2 production team asking if I'd appear on their show later that night.

EEK!  YES!!  All part of my master plan for World Domination, obviously!

After a couple of conversations with Maisie and a Skype check it was confirmed that, if nothing major happened, I'd be on the show straight after the first person had been evicted.  I had to think of a question to ask the panel based around that night's show too.

So I toddled off and scrubbed up a bit (it's slightly weird putting make-up on at 10pm when you're not actually leaving your own lounge), took my glasses off so that I didn't look like Velma from Scooby Doo, practiced my posh telephone voice and waiting for the production team to Skype me.

I wanted to ask, "Do you think Kiosk Keith is hamming it up a bit this year?" but that was vetoed in favour of my other question, "Looking at the camp's reaction after Jimmy was voted out, who do you think is going to bring in the fun and raise spirits?"