Things I Learnt In April

*hangs head in shame* I toyed with the idea of publishing this post before I went away but it was technically still April and there was a chance I still might learn something new. Then I returned from holiday and I've been snowed under with Can't-Be-Arsed-ness since Friday. Anyway, not one to let you down, here's all the stuff I learnt in April with a little bit of "What I Learnt In Magaluf" included too. I'm now off to write out "I SHALL NOT BE LATE AGAIN" 100 times...

Honesty wins the day! We sold an old compressor on eBay - we had no idea if it worked or not and we were totally honest in the description. We received a fair price for it and an old chap came to collect it.  We received a lovely email from him and he sounded chuffed to bits with his purchase and enjoyed a bit of tinkering!

I don't need knee surgery.  Yet.  I've been diagnosed with arthritis of the knee and probably shouldn't be running.  Cycling or swimming as an alternative form of exercise were mentioned but I can't blow my Whistle Of Power in a swimming pool and I haven't ridden a bike since I had a paper round! I've got a four month period of pain management and now that I'm not running further than four miles in one go, I'm finding that I'm getting very little pain. I have resigned myself to the fact that I'll probably never run another 10K or that half-marathon I had my heart set on but I love my GroupRun Blackburn running family community and truly believe that fate has had a hand in making a decision for me. And now I'm never going to mention my knee injury again.  Brownies Honour.

I didn't win the National Stationery Week Blogger of the Year award. But my good friend Adam from DeskOfAdam did which I'm really pleased about.  If you're not already you can follow him on YouTube / Twitter / Instagram.  Leading on from this, I am thinking about writing a book about my love of stationery.  I've written and self-published an e-book before but nothing in "print" so have been researching how to get a book published - there's a lot more that goes into it than people seem to believe so wish me luck! 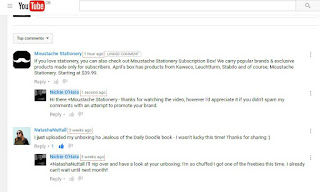 Some brands can really shoot themselves in the foot when it comes to marketing.  A while ago I contacted a stationery brand to see if we could collaborate and was met with a wall of silence.  That's fair enough because I know some brands have their own criteria for contacting partners or ambassadors and I don't have the biggest blog when it comes to stationery.  Anyway, this same brand interacted on a video of mine on YouTube that demonstrated one of their competitior's products with a blatant "come and see our product" comment, including their price. I've since challenged them about it and I'm not sure they can see any wrong in what they've done (their private messages don't provide any apology) but they did remove their comment - but not before I took a screengrab of it though..

If you challenge a journalist about their views you find out that they very often say certain things just because they are asked to be an 'antagonist'.  Therefore, I had a very interesting Twitter conversation with Giles Coren after his 'lycra wearing elephants' comments during the Little Stoke parkrun fiasco. He more or less admitted that he says what he believes the listener doesn't want to hear which may (or may not) make the interview more interesting. This makes me sad and a little mystified.

It's over 25 years since Madonna's Blonde Ambition Tour (I KNOW!! I'm Vogue-ing right now) and six of her seven backing dancers have come together to make their own documentary called 'Strike A Pose' which I really need to see! This BBC feature about it is an excellent read.

Here is my video of the month. I saw it shared on Facebook and, after a bit of digging, found out that it was about three years old.  I'm not sure many people realise that Miley Cyrus can actually sing really really well and this is one of my most favourite songs in the world!


I think that's it for this month.  I totally encourage you to follow me on Snapchat (username: nickieohara - original, huh?) because I think I've found my groove over there and I've posted a few new videos on YouTube which include some time lapses from the holiday (watch out Casey Neistat) and the odd "Today In 1 Minute" not-a-daily-vlog type thing I do. I'm off for a lie down. 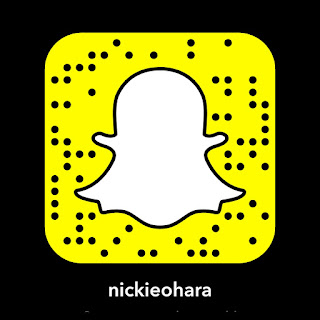