For a long time I have been interested in the way in which the trend for e-cigarettes, or vaping, has grown. 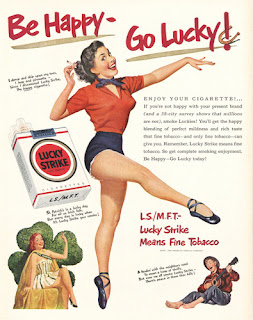 Marketed as an alternative to smoking cigarettes or as an aid to giving up smoking, part of my concerns stem from the way in which smoking was glamorised back in the 1920s and 1930s after smoking was originally associated with prostitutes and 'wayward women'.

Clever marketing connected smoking to the growing independence of women and liberation movements along with sponsoring training sessions which taught women how to smoke delicately and lady-like! In 1923 as few as 5 percent of American women smoked, rising to 12 percent by 1923 and upwards of 33 percent by 1965. Although smoking related diseases were still rare for women in the 1950s, by the year 2000 more than 70,000 were dying per year in the USA with lung cancer surpassing breast cancer as the lead cause of cancer death in women in 1987 [source].

Fast forward to 2014 and vaping is hugely popular. Because of the method of vaping, some establishments allow vaping to be conducted indoors (although this has changed moving forward) and my own son decided to try it out. This culminated in a phone call to home from school and his e-cigarette being confiscated after he was caught vaping on school premises.  Around the same time, Cancer Research UK tweeted out the following message which generated an interesting conversation about my concerns regarding my son's activity plus the lack of research towards effect on the human body in comparison to the research conducted on nicotine over the years.  It's worth clicking on the tweet in full to see how the conversation between myself, CRUK and another person developed.


I find it hugely interesting that my son tried vaping in the same way I tried smoking at the same age however he admitted to trying it because of the 'different flavours' available rather than the addictive nicotine element which I fell for.  I also found out that whilst e-cigarettes are not entirely risk-free, the health risk reduction has been proven to be 95% less harmful (you can read more about this here and it includes a link to a Public Health England official study).  I also read in the same link that there doesn't seem to be a link to e-cigarettes or vaping being an 'easy way to start smoking' for children or non-smokers.

I'm personally still not entirely convinced that vaping is as risk free as is currently demonstrated but I'm happy to see that it is reducing risk in many fields, moreso with the risks associated with nicotine-related second-hand smoke compared to the (much lesser) risks from vapour.

As ever, I'd be interested in your thoughts.  Do you vape? How did you start vaping? Have you only ever vaped or did you switch from normal cigarettes to e-cigarettes?


For more reading and research visit the Vapemate Blog.
For more information about articles like this please see my disclosure policy.