December 11, 2016
For this weekend's trot out I had registered to join the Blackburn 5k Santa Dash at Corporation Park. Round the corner from home, a free Santa suit and an under-12's 400m dash so my granddaughters could come and join in too. A perfect start to our family Christmas celebrations.

The girls loved their 400 meter dash with the eldest winning the whole race and the other just happy doing her own thing and run in her own time and style! Afterwards, we were going to collect their medals and Amie said, "Nana, I won that even though I'm a girl..." so we had a little chat about positive language and the 'This Girl Can' ethos and she's now saying she won because she's a girl. One proud Nana right here.

It's the first time the 'dash' has been held but it was really well organised and marshalled. The course was a killer - three x 1 mile laps which had a great downhill section (with a dodgy, slippy corner) but then a slow and steady uphill section leading onto a flat run along the park Broadway. At one point I got lapped by the front runner but someone took a picture so it'll look like I'm right behind the lead runner and that might be the one that ends up as my Facebook profile picture... *ahem*

I ran the first lap with all the other Santas then the girls wanted to join in so they both joined in with me on the second lap. By the third lap, Megan had had enough so it was just me and Amie for the third lap. She gives great advice to her 'slow running Nana'

"Nana, run on your tiptoes. It makes you go faster"

and wanted to know that if she did the same running as me, would she one day get a GroupRun t-shirt like me (lump-in-throat moment).

It would be great for this Santa Dash to become an annual event. A few tweaks are needed to the organisation but for a first time event, it was well attended and great fun. 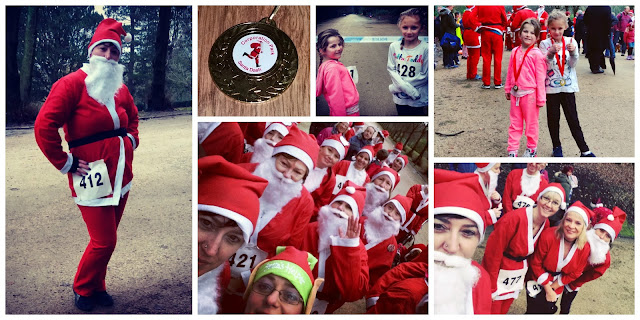