I've turned a corner.  Feeling negative about running has been locked away and if it threatens to rear its ugly head again I'm going to look back over the past couple of weeks and remember exactly what it was that changed my attitude. 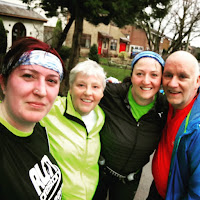 First and foremost, hard running - and running further - is paying off.  If you follow me on Instagram, you'll know that I ran my furthest ever distance last week... EIGHT MILES!  Claire - my training partner - arranged a Sunday run but initially wouldn't tell me how far we were going so I couldn't psyche myself out. It was Really Fucking Hard Work and I could feel my body having to push beyond any boundaries I had experienced before after six miles but I did it!  At the end I got overly emotional and sobbed in the street. 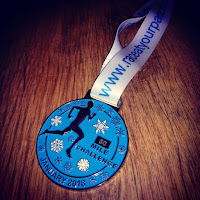 I also hit my goal of running 50 miles in January.  It actually ended up as 63 miles in total, even with a run totally written off because of tight calves. This was a club challenge but I'd also signed up for a medal and compression top from Race At Your Pace to keep me focused. I've decided to keep the momentum going and aim for 60 miles in February. It's a shorter month but hopefully achievable.

Next... born over the dregs of a bottle of gin and named in a flash of inspiration, The First 10 Minutes Are The Worst launched with its first episode in January.  It's basically just myself and my friend, Rowena, talking about running in a relaxed, truthful and humorous kind of way. The podcast will be monthly for now so make sure you're all tuned in ready for the next episode which will be published on 25th February. There were a couple of teething issues with the first episode but we know how to fix those, we have original theme music composed by Peter Clarke and you can find us by subscribing as follows:


iTunes | search for us in any podcast app | RSS

Listen to the first episode on Podbean

And finally, this month's race has already been run.  On Sunday morning I laced up my trainers and headed to Witton Park in Blackburn for the Blackburn Road Runners Winter Warmer 10k.  Club members aren't normally allowed to enter unless they have a charity place or have been given a place by a race sponsor.  My place was gifted last year but, after officially joining the club, I was given the option whether to run or not.  The route is a tough one with the first 3k totally uphill but, if I've learnt one thing over the past few weeks during my 10 mile training, it's that I HAVE to battle my demons.

Blackburn Road Runners members are THE BEST cheer team ever - even more so on home turf. The way in which they are situated around the course means that you only have to run for a couple of minutes before there is another team in place to give you a few words of encouragement or a 'high five'. 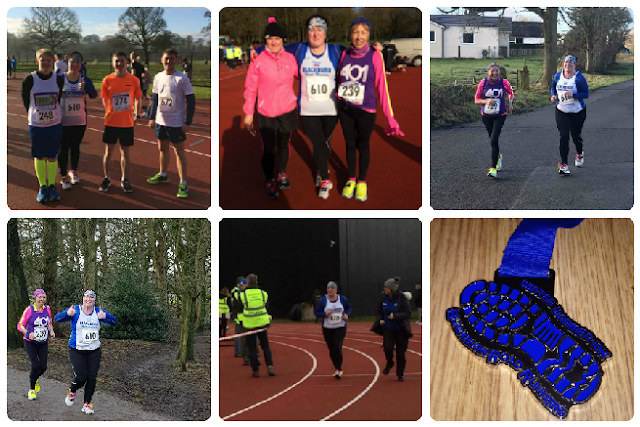 Another great part of the day was finally meeting Pat.  She's a Fylde Coast Runner and we've been chatting and supporting each other on Twitter for ages.  We ran together for the whole race and it was like we'd been friends forever.  Her friend, Chez was running just a short way in front of us and was listening to my podcast for most of the race. Give them both a follow if you're on Twitter... @patsylou59 and @chezpete 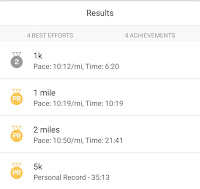 Apart from that first three kilometres, it was the best race I've run in a very long time. Friends noted that I looked happy as I ran (a rare occurrence for me) and Anna even said that she didn't recognise me coming over the brow of one hill because my running style has changed a bit - hopefully because I felt so confident. And... I somehow managed to get three 'personal best' times for specific distances (probably on the downhill bits but if Strava says it is so, then we're taking it as proof!) PLUS I knocked  a whole 6 minutes off last year's 10k time!


February is only four days old and already I'm loving it.  10 miles... I'm coming to get you!