What can you do when you have just six hours in Amsterdam?  This was a plan we had to make recently as we booked a National Holidays mini-cruise to Amsterdam but I've since found great deals on the Voyage Privé website.  We had no idea what to expect as we've only really been on caravan or holiday camp style holidays in the UK and package holidays abroad.  But the price was absolutely affordable (£99 each in July - yes, for the whole 3-day trip) and I'd booked it as part of a birthday present for my husband. I've included info about this at the end of this blog post (this isn't a review - I hate having to say that but as a blogger... y'know).

Because I knew we had such a limited amount of time in the city, I planned a few things to do and allowed time to wander round and soak up the atmosphere.  What I hadn't banked on was a freak, European-wide heatwave with temperatures reaching 36°C/99°F. 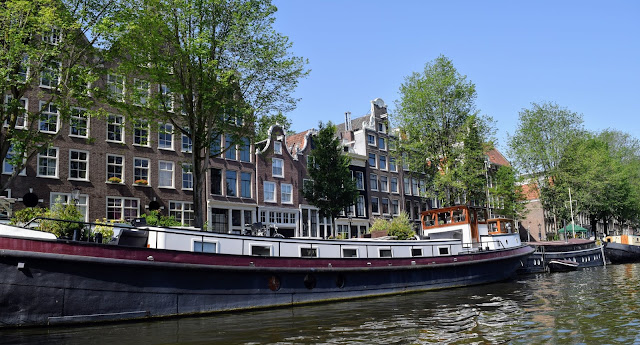 For our canal boat tour we pre-booked tickets via the official I-Amsterdam website and printed off the voucher. You have to visit one of the I-Amsterdam-associated ticket booths to validate your booking and you are then directed to the correct jetty.  You can use your voucher at any point during the day but certain times of the day may be busier than others. If you don't pre-book, there are ticket booths for many canal boat tours all situated directly outside/opposite Amsterdam Central Station. 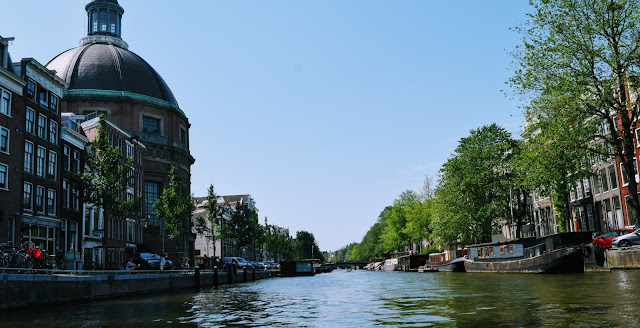 The tour lasts about an hour and you are taken around some of the network of canals in the city centre.  You are provided with headphones (free of charge - you can keep these or return them so they can be recycled) which plug into a pre-recorded tour guide in a variety of languages. It's a great way to learn about the history of the city and see some unusual and famous sights.

It's not often you find yourself leaning in for a closer look at a model of a couple "fornicating" because the information card provides an unusual fact about that particular piece, only to actually laugh out loud at the next showcase and then move to another room to find interactive displays of flashers and prostitutes at work alongside vases made from models of penises and so much more.  I bloody loved this museum and could have spent loads more time in there!

There were 100s of coffeehouses we could visit but it made sense to go to the one where it all started - Bulldog The First.  The coffeehouse now comprises of a souvenir shop, a bar area, patio seating and the original smoking cellar where you can buy your cannabis. 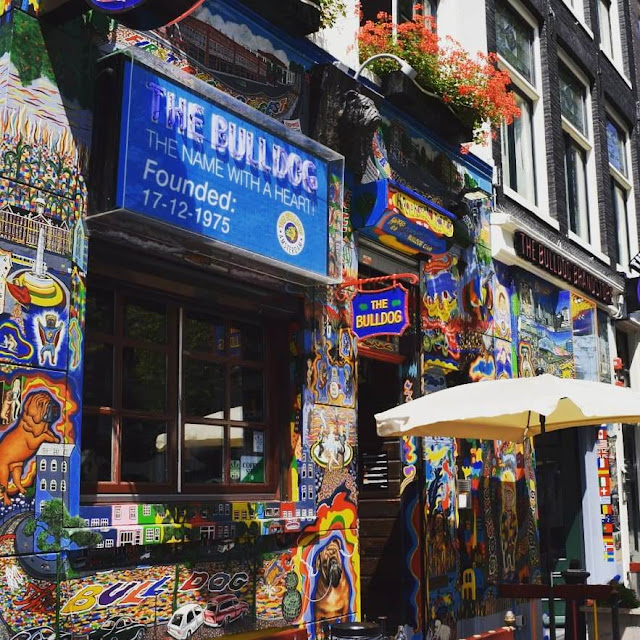 We went down into the cellar and asked for a recommendation, bearing in mind that we were there for just a few hours and we had to find our way back to the coach and then travel over-night on a ferry again! We bought just the one joint (filled with their own herbal mix rather than tobacco), a couple of iced lattes (rock and roll) and sat in the bar area to mellow out. 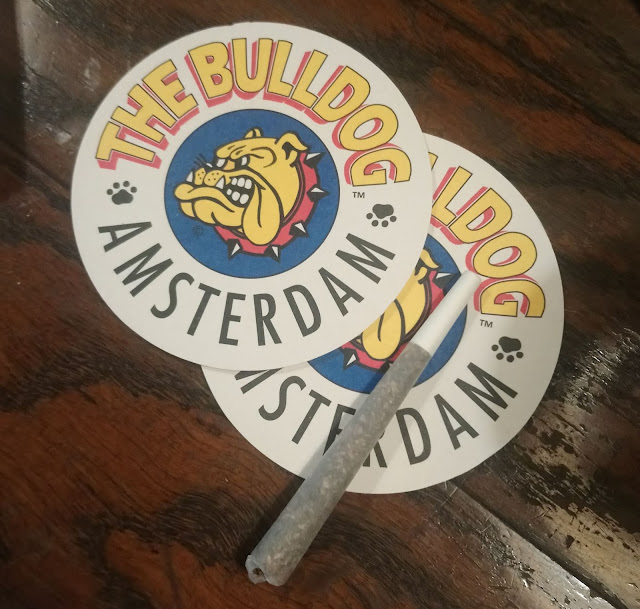 I'm not going to lie, but it felt a bit weird smoking a joint in a public place and even though we'd chosen a medium strength weed, it hit us straight away! We smoked about half of it and docked it to have later.

After visiting the Bulldog, we had a bit of a wander around the shops and chilled for an hour with a couple of cokes and I tackled an attack of the munchies with the best steak baguette I've ever had! We then sparked up the joint again and had a few more drags.  We ended up with about a third of the joint left and had to bin it because we knew we couldn't take it back through customs although we would have been OK as we never had any bags searched!!  We did want to visit the Bloemenmarkt (the floating flower market) but, even though it was about a 15 minute stroll away, it was just too hot to walk anywhere, so we headed back canal side and sat, watching the world go by, whilst waiting for the coach to come back and collect us. 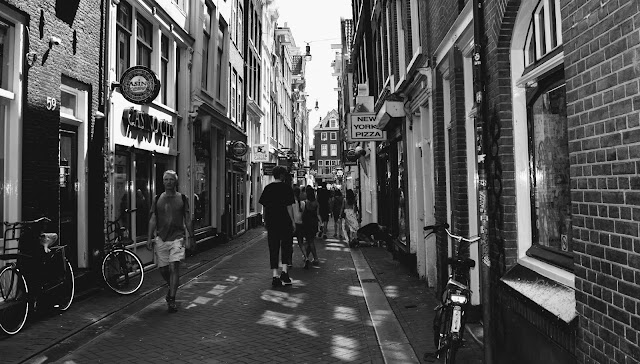 Things I Want To Do Next Time I Go To Amsterdam

This experience was absolutely brilliant; the perfect way to get a taste of a city as a tourist... and it's given me an urge to go back.  There are a million and one photo opportunities (hence this photo-heavy blog post) but I'd also love to spend maybe two or three days there next time. I read about the hop-on-hop-off bus system (the price of the day ticket includes a canal boat tour) which would be a great way to navigate the city and visit the traditional museums like the Rijksmuseum, the Anne Frank House, the Van Gogh Museum, the Cheese museum (apparently just a cheese shop with a few displays but... CHEESE) and also the Xtracold IceBar (recommended by people on the same coach trip as us) and the Museum ons' Lieve Heer Op Solder (the hidden church).  I'd also like to have a wander round the red light district at night because even though it can sound seedy, I understand that it's super-regulated and all the workers are very well looked after. 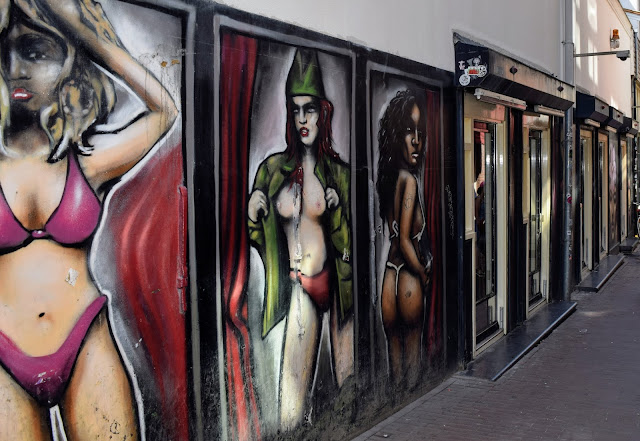 This isn't a review of the short break (get in touch, National Holidays - let's talk!) but I would absolutely recommend it to anyone wanting to explore a European city.

We were picked up from Preston Bus Station and driven to the port of Hull with four other pick-ups on the way.  This part of the journey took about four hours with a stop at a service station on the way.  Once we were at Hull we had to change coaches (three National Holiday coaches met from various parts of the country, swapped passengers and went to Holland, Belgium and Germany) and the passport/customs situation was explained.  Your driver collects all passports, they are taken into the P&O Ferries office, boarding cards and cabin keys are put inside the passport and then the driver hands them back to you.  You are then driven into a "shed" where a customs officer will come through the coach and check all passports.  At this point, bags may be off-loaded for random security check and/or you may be selected to identify your bag for a security check. This didn't happen on our outgoing customs check and once through the "shed" we got off the coach and walked onto the ferry.  We were then directed to our cabin (on a mini-cruise, you keep the same cabin for the outbound and inbound journey so you can leave your overnight bags in there) and we could enjoy the entertainment on the boat.

There was a cinema with 8 films showing at various times, at least three bars, a duty-free shop, a casino and a full cabaret show.  There was also children's entertainment available.  There is a buffet-style restaurant on board and you can purchase a "meal deal" which covers your evening meal and breakfast plus soft drinks in the restaurant.  There is also a table-service style restaurant available. Considering you are at their mercy, the drinks aren't as expensive as you may think. There were drinks-deals available (4 beers or glasses of wine - or mix and match - for £13 or if you wanted shorts it was an extra £1 for a double).

We set sail from Hull at around 8.30pm and docked in Rotterdam at 7.30am.  It's pretty amazing to see a sunset in one country and a sunrise in another.

It's an early start if you want breakfast and we were back on the coach for 8am. After clearing customs and driving through rush hour traffic we got to Amsterdam just before 10am and had to be back to meet the coach again for 4pm.  Then we did the whole thing in reverse again to get back to the UK.  It's A LOT of travelling and we had about 9.5 hours sleep with the late nights and early starts for a few hours in a city but I really did think it was a wonderful experience.  I just wish it hadn't have been so SCORCHIO!!

I'm already looking at mini-breaks in Amsterdam or even thinking about trying the National Holidays mini-cruise to Bruge or the short break in Paris... 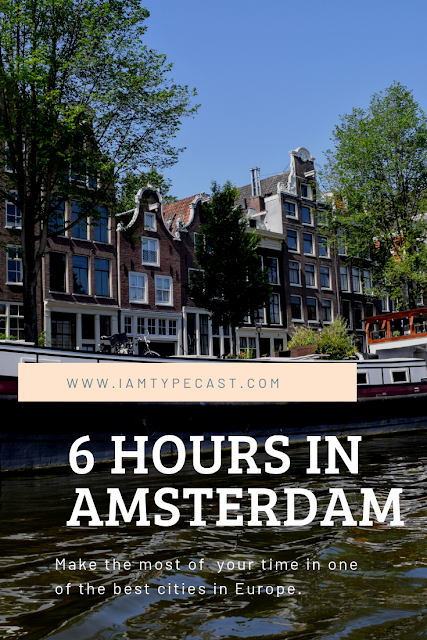