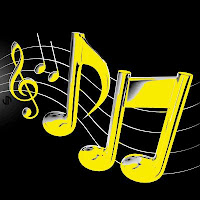 Without music life would be a mistake. ~Friedrich Wilhelm Nietzsche


I love my music and it surrounds me all day - mp3 player, radio, Spotify... Without it, even just playing in the background, I feel lost. The first tune of the day can set my mood for the next few hours or can irritate me by playing on a loop inside my head during moments of silence.

There are certain songs or melodies which immediately transport me back in time to a certain event or emotion, there are film scores which will make my eyes prickle with tears
and there are genres that I just don't get (my friend Sam tries to get me to like all sorts of weird stuff - she's a strange one, for sure).

I used to participate in a "music thread" on a forum on a Friday night. It was mainly a bunch of women (and the odd bloke), sitting in front of their computer, with a bottle of their favourite tipple, posting links from YouTube. Some were favourite songs, some were long forgotten songs that have jumped into the forefront of the memory after hearing another song, some were just bizarre, some were meaningful, some were current chart hits and some were special. But basically, it was a night "in" with my friends, gossiping and toasting the week gone by and no paying for babysitters!!! It's my favourite night of the week. I think you have to join in to appreciate it - it's not geeky at all....

I also believe that the accessibility we have to music these days is amazing, as is the diversity. I really miss the days of waiting for a new record to be released by my favourite band, saving up to buy it from the record shop and then watching it climb the charts as its popularity increased. Nowadays, because of downloads, a new release from a popular band is expected to hit the top spot in the charts and creates more furore if it doesn't. However, the turnaround of new music gives us much more choice and variety.