Things that money can't buy... well, they obviously can, for a start... 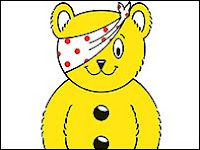 All week I've been listening to the grand job that Sir Terry Wogan does for Children in Need, auctioning off the "Things That Money Can't Buy" to raise money for the fund. There are some fantastic auctions on offer this year but the minute the bids go over ten quid, it sort of puts me out of the running, giving me a feeling of inadequacy. And I'm sure there are a lot of people who feel the same way.
The winners of these auctions don't actually need these prizes. It seems to be more about how much cash they can flash rather than doing it for the good of the cause and, if they're being honest, the amount of money that they've bid could actually buy what they are bidding for!!!!!
I know there's a 50p-to-enter-plus-standard-network-charge text-in competition for us minions to enter but the prize for that isn't exactly fantastic... a day at the Radio 2 studios sitting in on all the main daytime shows - but you probably won't be allowed to talk or anything normal like that. I'd quite fancy helping Jeremy Vine with his phone-in but the winner will be eating lunch with Ken Bruce (in the BBC canteen?) whilst that is going on.
I don't deny that the money raised by Sir Tel this week is going to a fantastic cause but I do feel that it eliminates probably 80% of his audience from taking part.
celebrity charity media television