Things I Learnt In June

June has been much of a muchness. We've had extreme weather from glorious, almost tropical, sunshine to rain that falls so hard from the sky that it bounces off the pavement. I can go to work wearing a summery outfit and come home wearing galoshes and a snorkel!

It's been the worst ever month for my hayfever. In fact, hayfever can fuck off right to the back and then fuck off a little bit more. I usually suffer from March to the beginning of May and then a little bit in September but this year there's no respite and I'm unsure why - maybe it's because of the aforementioned mixed up weather? I'm in the process of trying a different type of antihistamine and the use of an acupressure point on my hand to try and curb it. But it still shit.

Once you start thinking about it, there's no natural place for  your tongue to rest in your mouth. 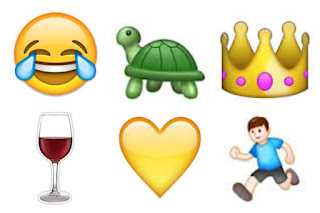 The Egyptians were way ahead of their time with hieroglyphics.  Most of the communication I read on social media is accompanied by emoji to emphasise the mood of a photo or a caption or a status update. I've even got a few of my own favourites (crying-with-laughter face, tortoise, yellow heart, running man, glass of wine, crown - which basically sums me up) and I have seen friends correspond solely in emoji and not use a single word.

The "When You Were 16" theory of marketing is fricking GENIUS! I heard about this on the radio and can't find a definitive link to anything written about it but I have no doubt it works, so here goes...

The reasoning behind this is that you were (probably) at your most impressionable when you were sixteen years old so if you are taken back to that point with some nostalgic memory you may be swayed to buy the product because of the triggered memory.  SEE... GENIUS!

You can have one hundred bits of paper but you have to have the *right* piece of paper to write a note on. I thought it was just me until I saw my stationery-loving friend @Rhomany announce on Twitter that she had a load notebooks and paper on her desk but nothing to scribble on...

I'm falling in and out of love with Big Brother on a daily basis. I've never missed a series and I berate myself every year for becoming hooked on it but I love people watching and seeing how they interact when in a confined space and a forced living environment. The issue I have is that originally there was no real format to the show - it was basically about putting a bunch of people who would never normally interact with each other together for a few weeks and seeing what would happen.  Within about four years, the Big Brother housemate were being linked into the zelebrity (sic) culture and more and more 'wannabes' were auditioning for the right to their 15 minutes weeks of fame. I'm really disappointed that the majority of this year's housemates were already known to (a) each other and (b) to me - a reality TV junkie. Rather than an official audition process, I'm sure there's a reality TV agency that sends the CV's of (say) 100 potential housemates and the Big Brother producers stick a couple of pins in them. There's no research done, especially to the extent of looking at their social media streams (see my thoughts on the permanency of digital footprints here) which can be a dangerous move.  I'm still watching though (and flogging myself, nightly, for doing so) but I wish I could be drafted onto the reasearch/production team for a while just to get a gist of what goes on behind the scenes. This paragraph has almost turned into a blog post of its own - maybe I should write about it again - I used to, after all!

If you ask Amazon nicely to remove the advertising from your new Kindle, they will do so for free.  My five-year old Gen4 Kindle was doing just fine until I bragged about it and it gave up the ghost after we returned from holiday a couple of months ago. I asked Amazon if they did trade-ins but it was way too old so they offered me a discount on a new Kindle, which I gratefully accepted. I was a little annoyed that my Kindle now displayed advertising on the screensaver and the homepage/library so I contacted Amazon to ask them if it could be removed. They explained that displaying advertising for their Kindle store allowed them to offer the Kindle at a lower price and linked me to a page where there was purchasing options for with/without adverts. They then told me that I would be charged a one-off fee of £10 to remove the advertising. I mentioned to Amazon that I had not been told that this was part of the deal (and I had a copy of the original web chat with them to prove it) so felt as though it had been mis-sold to me. After some conflaboration, they agreed with me and removed the ads for free.

which leads me nicely onto...

What I have enjoyed reading this month:


What I am looking forward to reading next month:
*there's a theme of physchological thriller running through these selections for some reason... 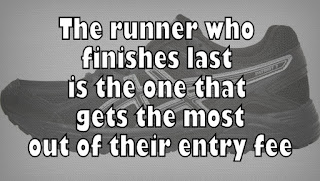 I'm still finding running Hard Work. I bloody love my 'couch to 5K' community running group but I'm pushing myself to improve on my own stamina and to better my breathing pattern to try and make it easier for myself.  I've now started co-leading a 'Wednesday Social Run' group which leads between 30 and 50 runners around a mystery 5K run in and around Blackburn each week. I'm also challenging myself to a 'long run' of between 6K and 8K every Saturday after the C25K session with some running buddies (with the possibility of entering a 10K 'race' in the near future again). I'm beating myself up about everything because I'm not anywhere up to the standard I was this time last year (pre-injury) and don't envisage myself being there anywhere in the near future. I do have some great running buddies though who have told me I need to take some of my own advice and keep at it!

Here is my video of the month. It's one I saw shared on Twitter by @TOther_Simon and I didn't realise at first, but it's actually him singing a brilliant original song called Porridge and Pins which is about how he can't dance. I'm fascinated by the loop pedal and wish I was more musically talented and more inclined to pick up my own ukulele and practice!

So here we are at the end of another month. The hayfever hasn't subsided (either from the beginning of the month or during the time it took me to edit this blog post at the end of the month) and I'm just about to setting in front of another episode of Big Brother - so nothing changes!! Let me know what you've learnt this month, if you have any psychological thriller books you can recommend me (I'm not planning on killing anyone... I promise) or just go straight from here to my YouTube channel to have a sneak peek at the stationery items I've been reviewing this month.