Things I Learnt In May - All About That Car Accident

Hearing your son tell you on the phone that he's been in a car accident whilst he's still trapped in the car sends you into parental overdrive, especially when you find out that the accident has happened less than two minutes away from your own house. I'm still not sure the decision to jump in the car and head off to the scene of the accident was a good idea.

Actually seeing your son trapped in a car and watch him be cut out by the emergency services renders you feeling useless.  Hearing him cry out in pain and know you can't do anything about it makes you feel more numb than you've ever felt. 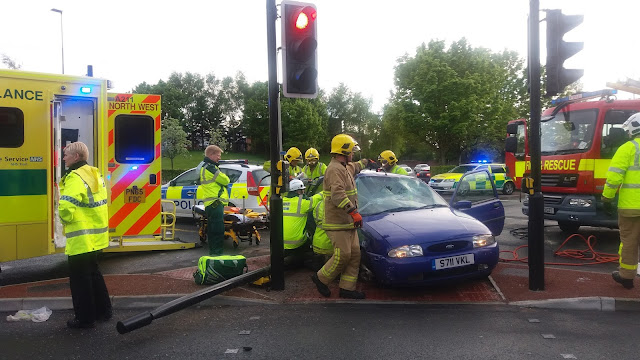 Seeing people flock to the scene of the accident and take photographs makes you wonder why they need to record this incident for posterity.  This extends to the man who told me he was "recording it to show his son to warn him about dangerous driving" (I *might* have given him a mouthful), to the people ducking under the police cordon to get a better view, to the journalist from the local paper who eventually recorded all the wrong information and to the 'friend of a friend' who felt the need to share his view of the accident on Facebook... fuck you all!

Sitting in a hospital, in the major trauma unit, just watching everything going on around you makes you feel lucky to be alive - and for everyone around you to to be alive. There are people of all ages with all manner of injuries or health issues around you and no one person is more/less important than the next.

Trying to find the words to tell other people that your son has a blood clot on the brain, a broken neck, bleeding and bruising on the lungs and a broken pelvis means you have to bottle your own feelings for a while and try and find the answers to the questions and then the questions for more answers.

There are not enough expressions of gratitude to be able to begin to thank the emergency services and the continuing health care we have available at the drop of a hat here in the UK. And then not receive an invoice for that care when you are discharged. And not have to consider the price of the continuing care for the next three months or so.

It is possible to survive off very little sleep and lots of adrenalin. I think I was running on 47 hours awake with four hours of broken sleep at one point.

No matter how old your child is, you are always rendered helpless when you see them lying in a bed, frustrated with the situation they have created, feeling guilty because they put one of their best friends in danger and angry at themselves for everything else. And you just want them to be little again so you can scoop them up and hug their pain away.

Updating Facebook is a double-edged sword. On the one hand, it's a great way to inform many people about developments and where they can express their love, concern and support.  On the other hand, it's a place for judgemental bastards to think that providing information via your Facebook status is more important than caring about your child in the hospital. But then these people would rather believe the aforementioned local rag than come to the source for the real details.

It is impossible to be in two places at once and sometimes you have to accept that, even though you are wracked with Mother's Guilt.

You run out of things to say to each other, especially when you see more of your grown-up child when visiting him in hospital than you do on a normal day-to-day basis! This is mainly because he is laid on a bed with nothing to do, he has very little to tell you and because you have only been home to sleep, back to work and then driven to the hospital again.

A collective sigh of relief and a silent cheer is heard when the official discharge documents are signed a mere two weeks after the accident. This, in itself, is a small miracle when the original diagnosis was that initial recovery was thought to be a hospital stay for five weeks, possible surgery and many months of physiotherapy.  Of course, it's a start of another long road to recovery which will take time, patience and hard work. But this could have been so much worse.

At this point I normally share a Video of the Month but I'm not sure there's an appropriate one. This one, however, is one that's been playing on a loop in my head for days now.

I think that's it for now. Normal(ish) service will resume next month. Thanks for getting this far and letting me share my train of thought and emotions.