April 05, 2017
Today saw the announcement of the closure of Standard Issue - an online magazine fronted by Sarah Millican, written by women, for women and covering every single topic you can imagine. I've followed from the beginning (I even applied to write for them on a couple of occasions but was turned down) and there have been some stonking articles on there. So to hear that the main focus of the website is being wound down is a surprise and saddening.

Looking at this from a blogger's point of view, I find it incredibly interesting that a project which has so much potential has found it impossible to turn a profit in a world that now needs online content to be fed to it pretty much consistently.

What do I mean by this?  I'll backtrack a little.

A couple of weeks ago I read in the Popbitch newsletter that the Mail Online uploaded over 2000 stories to it's pages in one day. ONE. DAY.  This is the most popular news website in the world. And the reason they do it is for advertising revenue. They sell their white space in the form of interactive background adverts, sponsored articles and product placement "buy her dress" type inserts within articles; all "pay per view" or "pay per click" advertising.  For everything that the Daily Mail and the Mail Online is, they have to be admired (for want of a better word) for addressing the fact that online attention spans are short and needy.  You spend two minutes reading an article and then you're gone unless there is something else to hold your attention - another article in the same vein that comes recommended.  You click... another set of adverts pop up, and so the cycle continues. They know that the articles can be flimsy and weak, with content that is syndicated from other sources or just a narrative of a zelebrity Instagram picture or Snapchat video because there is a world of content consumers out there who believe they need to know this stuff.  There are a zillion other media outlets that follow this blueprint successfully too. 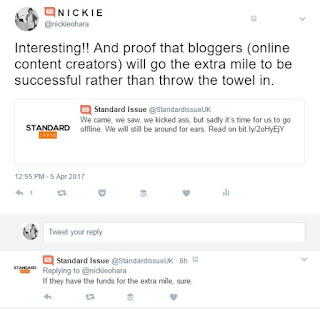 I have no knowledge of how or why Standard Issue failed to make a profit but they didn't - and that is the reason they provide for the termination of their offerings. Their content is meaningful and their readership may not be the type that feel the need to click on adverts that invite you to purchase something based on your recent internet history (it's Google magic, trust me) but maybe their lack of a comments section drove readers off-site? Maybe their content was shared via social media and the continuing discussion happened on Facebook or Twitter or on other blogs. Whatever the reason, I saw their tweet and shared it, adding my own thoughts to it as my right to reply.  You can see their response in the image I've shared.

Which brings us back to the point in hand.

The conversation continued with me expressing that I'm an unfunded blogger, I have been writing here since 2002 and have yet to throw the towel in. I also mentioned that whilst I understood they were hurting or angry that their response to me was harsh.

I feel that bloggers get a rough end of the deal when it comes to content creation.  The word "blog" and the title "blogger" has sometimes been mentioned with disdain. Even all those years back when my blog was a Yahoo Geocities 'website' with family anecdotes and musings, some members of a parenting forum asked me why I bothered and 'what was the point?'

I'm not sure there is a point to anything on the internet; why do we share these snippets of our lives via Facebook, Instagram and Snapchat? Why do we pin images of things we want or can't have to our Pinterest boards? Why do we strike up conversations on Twitter with various strangers? Why do we try to change the world with words on our blog?

Maybe we do it because we know it might be useful to just one person out there.  Or maybe more than one. Or even a whole bunch of people.  I know that some of the articles I've written on here have been read by tens of thousands of people (*cough* David Beckham's Tattoos *cough* not shallow at all *cough*) and the occasional think-piece about my own personal experience with cancer, ADHD, and mental health has provided me with the opportunity to stand up and talk in front of hundreds of people to hopefully provide them with a different outlook on living in these situations.

I've ended up having a couple of brief conversations with people today about online businesses and influence. I'm very lucky to have a wide network of opinionated friends who know how to have a discussion, often where our opinions will clash but who are intelligent enough not to resort to insults. Three of them have agreed to give me quotes related to my musings today.

Firstly Cath Janes, who was a regular contributor to Standard Issue


I wrote for Standard Issue for over a year and was never paid because they don't pay writers (at least they didn't pay me and many other writers that I know. I'd like to think that, as a mag that supports equality and women's voices that it at least paid one woman). That partly why I was so surprised at it going under. If writers were not paid, there was no print involved and there was plenty of celebrity endorsement, not to mention that it routinely asked for donations and subscribers, where did it all go wrong?

Cath won't mind me saying that her final piece for Standard Issue ended up as a very controversial topic which was pulled after publication and edited in favour of soothing another journalist. You can read about that here.

Andy called my blog a "hobby" today. I wasn't too keen on accepting that as a description of what is essentially an extension of my own thoughts and something that has, as previously mentioned, brought great opportunities into my life. He explained himself as follows:

Your blog is a hobby as it has negligible overheads. Standard Issue likely has a big budget, staff, hosting and design fees. It's not your job. It's what you create in your spare time.

He went on to say

What I mean is that Typecast isn't renting a swanky office, employing an editor, advised to run everything past a lawyer and you're not paying some twatty hipster with a Mac to design website buttons for £180 an hour. You're just getting it done yourself. It's sustainable because of the time you're prepared to devote to it and because you're efficient.

Knowing Andy, he's expressing the same thoughts that I have on a regular basis about being in the right place at the right time with the right idea and having the drive to see it through. If nothing else, it's made me think more about all the hats I wear for this blog.

'I’m genuinely sad to see Standard Issue close, because it was a breath of fresh air amongst an awful lot of dross. Yet it still wasn’t viable, which says a lot about an over-saturated industry.

She goes on to say


Maybe such lifestyle sites would benefit from bringing in bloggers and other content creators (properly paid of course, because all contributors have genuine worth) as these people already have an audience of their own. An audience that will come with them and spread the word.

I could make this into a much longer conversation about influence (is there a 'Part Two' to come?) and link to plenty of research and discussion about how online content creators are actually KILLING it when it comes to sharing a message.  I also wrote about the value of bloggers a while back - you can read about paying bloggers what they are worth here - and how they were there, right at the beginning of internet time, tapping away on their geeky keyboards, creating content for other people to enjoy and discuss, and building up a reputation that is now revered but very much misunderstood especially someone needs to use that reputation/audience/platform to share their news.

This is probably all a jumbled mess of words and thoughts - and probably the reason why Standard Issue didn't employ me as writer - so well done if you got this far.  I'd be honoured if you shared your thoughts about this in the comments section or with me on Twitter or Facebook (no ads here - you're safe from that type of influence for the time being).  Are you a blogger? Do you feel the same or have you had a different experience?  If you're not a blogger then how do you feel when reading blog posts versus other web content?