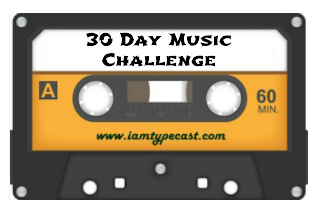 Over the past couple of weeks I've noticed a couple of friends updating their Facebook profile with the 30 Day Music Challenge (cheers for the inspo, Alex and Lizzie). They've chosen some interesting tracks and I thought it would be a good idea to publish my selection throughout April on here as part of my own personal Soundtrack To My Life for 2017.

All the prompts are listed below so feel free to join in if you like - tag me on Facebook, share a link to your blog post(s) or update your choices in the comments section here each day. Come back every day in April to see the next tune that I've picked.


DAY 1 : A song you like with a colour in the title

New Order - Blue Monday : This may be predictable but I never get tired of hearing it. Whilst it's very 80s electro in its sound, it also feels very timeless.

DAY 2 : A song you like with a number in the title

The White Stripes - Seven Nation Army : There are three reasons for this choice - the drum beat, the bass riff and the seemingly never-ending trippy feel to the video.  And... don't hate on me too much... I even like the Marcus Collins remake of this song.

DAY 3 : A song that reminds you of the summertime

OMD - Talking Loud And Clear : I think I'm probably influenced by the video to this song but the lyric, "...lying in the grass with the sun on our backs..." just makes me think of teenage summer holidays gone by with not much to do other than lounge about and think about teenage holiday romances.

DAY 4 : A song that reminds you of someone you would rather forget about

Black Eyed Peas - Shut Up : Weirdly, I've found this a difficult choice. There's no-one I would really want to forget about as everyone who has been part of my life has shaped it in some way. There are, however, times that I've really wanted to facepalm people and have definitely done the one- or two-fingered salute the second they've turned their back.

DAY 5 : A song that needs to be played LOUD

Meat Loaf - You Took The Words Right Out Of My Mouth : I want to choose the whole of the Bat out of Hell album because there's no way that any of those songs are being played quietly. If pushed, I'd have to choose this song - it's not my favourite but as soon as it comes on in the car, that dial is going up to 11!


DAY 6 : A song that makes you want to dance

Madonna - Hung Up ; I grew up copying the dance moves to pop vidoes and choreographing my own little dances to my favourite songs so it seems unnatural to *not* want to dance to anything that has a decent beat behind it. I could have picked any number of Madonna songs here but I'll start with this one before I get carried away.

Liza Minnelli - Cabaret : The problem with this is that for short journeys in the car I usually listen to the radio (for a mixture of talk and music) or I catch up on my podcasts. I very rarely drive long distances on my own but when I do, a 'mix tape' selection CD is usually the music of choice.  One thing I do love to listen to in the car, on my own, is songs from musicals where I can sing along and imagine myself in a certain role (stop laughing). I do a fabulous Liza Minnelli, very reminiscent of this performance...

DAY 8 : A song about drugs or alcohol

Chase & Status - Blind Faith : So the song probably isn't about drugs but the video interprets it as so. It's very cleverly been filmed and every single second of this video reminds me of the raves I went to in the early 90's - much more so that that mental 'Bounce by the Ounce' video that was doing the rounds a couple of years back.

Status Quo & The Beach Boys - Fun Fun Fun : For no other reason than this version makes me smile every single time I hear it. I've no idea why this collaboration happened but it's just awesome!

Lou Reed - Perfect Day : The title of this song makes you believe that it's going to be a joyous song but the lyrics "you just keep me hanging on..." really gives it the opposite feeling.  I suppose the fact that it was used in an overdose scene in Trainspotting and was used as the official Children In Need single in 1997 gives it an even more melancholy feel.

McBusted - Air Guitar : Probably an odd choice for me but this modern track is a very clever song from the two conjoined bands, McFly and Busted. The words just work and the tune is brilliant catchy - fabulous songwriting from three of the band members! And just in case you don't know how great these lads are at singing, have a listen to this warm-up a capella version from backstage somewhere.


DAY 12 : A song from your preteen years

Duran Duran - Union of the Snake : I'm going to have to go with this choice as I heard Union of the Snake when I was was about 11 years old and I always associate discovering Duran Duran with starting high school. Of course, after this song I went through their back catalogue and realised that I'd heard a couple of their other tracks but I was already hooked.

Pretenders - Brass In Pocket : It would be wrong of me to pick a Queen number for this prompt as I didn't discover and appreciate them until the late 80s so this song is one that I specifically remember as a child of the 70s as not sounding very 1970s in its style and definitely part of the move from the 70s to the 80s music sound.


DAY 14 : A song that you would love played at your wedding

Beats International - Dub Be Good To Me : I'm already married and whilst my wedding was a fairly traditional registry office service, it wasn't exactly a conventional wedding situation and I never had a first dance - or even any dancing. If I was getting married today then I'd definitely be looking at choreographing one of those 'surprise' dance sequences that you often see on YouTube. Anyway... this song was in the charts when we first met and it sort of tells the story of the beginning of our relationship so, if there's ever a reason for us to have a song played anywhere, it would have to be this one.


DAY 15 : A song that is a cover by another artist

Soft Cell - Tainted Love : When you think about it, a lot of songs are covers - in fact, many of the above choices are covers or have been covered since their release. And a lot of the time you don't realise how good a song is (or was) until you hear it covered by an artist you are more in tune with (no pun intended). This is exactly what happened with Tainted Love.

DAY 16 : One of  your favourite classical song

Rachmaninoff's "Rhapsody on a theme of Paganini" : This should have been a difficult choice considering the amount of music I have danced to when I was younger but it wasn't.  This is the main theme music from one of my all time favourite films, Somewhere in Time.  I only have to hear the opening bars and I'm already in floods of tears just thinking of the connection to the film.

DAY 17 : A song that you would sing as a duet on karaoke

Human League - Don't You Want Me Baby : This is easy but corny. In fact, there's a few that my husband and I sing but every single one is just as cheesy - Paradise by the Dashboard Light, I Got You Babe, etc - mainly because I'm not very tuneful and we both have to be hammered to get up on karaoke.

DAY 18 : A song from the year that you were born

Rod Stewart - You Wear It Well : I could have chosen the #1 record on the day that I was born but that was Amazing Grace played by The Pipes and Drums of the Military Band of the Royal Scots Dragoon Guards (I know... five weeks at the top of the charts too!) so I decided on this songs as my husband loves Rod Stewart and it really stood out to me in the top 100 tracks of this year.

DAY 19 : A song that makes you think about life

DAY 20 : A song that has many meanings to you

DAY 21 : A favourite song with a person's name in the title

DAY 22 : A song that makes you move forward

DAY 23 : A song that you think everyone should listen to

DAY 24 : A song by a band you wish were still together

DAY 25 : A song by an artist no longer living

DAY 26 : A song that makes you want to fall in love

DAY 27 : A song that breaks your heart

DAY 28 : A song by an artist with a voice that you love

DAY 29 : A song that you remember from your childhood

DAY 30 : A song that reminds you of yourself


music Soundtrack To My Life