A Bit Of An Running Update

I've not blogged properly in a while and it's been a long old time since I did a proper Fitbitches update - May to be exact.  But we'll come to that in a minute.  First I want to tell you a little story about someone who has made me burst with pride recently and she's forever moaning about me not mentioning her on the blog so I'm dedicating most of this entry to her *ahem*. 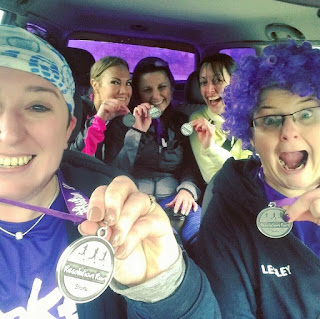 This is Lesley (sporting the purple wig - that's not her real hair).  She's my running 'wifey' and we have come a long way together.  We met when she joined my group to start the C25K plan back in March 2015. On week 3 she felt very under-confident about her running and wanted to join a 'slower' group as she thought she was holding the rest of the group back.

That's simply not how I work when I help motivate people through the C25K plan. To coin a couple of clichés, we're all in this together and my group supports each other through thick and through thin.  My favourite motto is 'We Start As A Team, We Finish As A Team'.  It's not about having slower/weaker/faster/stronger members - it's about including all people and using their talents to make your team stronger.  I promised her that we would always look after her and that she wasn't holding anyone back, or letting anyone down, least of all herself.

And this is exactly what happened... Group 6 - my team - became almost inseparable. We volunteered together, we progressed up to 10k together, we ran races together and we marshalled at events together.  As other members of our group went on to run further distances, myself and Lesley promised each other faithfully that we would stick to 5k and 10k distances because this felt manageable and tested us just enough.

After taking on - and completing - a huge challenge of walking the Three Peaks, Lesley decided that she was going to do the Great North Run to raise money for the Anthony Nolan Trust. A bloody half marathon.  THIRTEEN POINT ONE FRIGGING MILES IN ONE GO.  OK... to most serious runners, this is something that happens a few times a year. But us? No siree.  However, she said that it was just going to be the one though - for an important cause and a personal challenge.

I watched her progress through the half marathon training plan whilst also helping out with a running group in her home town, joining in her fitness and healthy eating group, juggling all the usual day-to-day pressures... and stepping out on that 'long run' once a week on her own - something that we've both found really hard work - running alone. I saw the Strava updates, the Relive videos, the little updates shared on Facebook and was hugely in awe of every step she was taking.  It's something that I thought I might want to do one day but it scares the living daylights out of me, mainly because of all the training hours that you have to put in but also because I cannot imagine running constantly for 2-3 hours after all the 'issues' I've been having recently, mentally and physically.  I tracked her on the day using the GNR app on my phone and literally cheered and cried a little when I saw that she'd crossed the finish line in just under three hours!!

I'm so bloody proud of what she's done - and everything else she's achieved over the past few months too.  And I'm not the only one that's noticed.  Lesley has also been nominated for, and has won, a local community sports award that recognises local sporting achievements!! This is for all her hard work helping people get back into sport by being involved with the aforementioned running group and a fitness/wellbeing group and she receives her award next month.

We occasionally run together from time to time - not often enough though - and that 'one half marathon'? Yeah, I've lost my wifey to long distance running now.  At the last count, she had entered at least one half marathon for 2018 and had her eye on another two. I am now a running widow (sort of). But a bloody proud one!


So where does that leave me now?  If we look back at the May edition of Fitbitches I'm very 'woe is me' but at least I was making plans to go back to the place that got me running in the first place - GroupRun Blackburn - my 'couch to 5k' home. I joined in the 'Celebration Run' on 3rd June for the Spring Plan but it didn't feel much like a celebration.  Every step felt heavy and it was Such Hard Work.  I got talking to Andrea during the run and we were both in a funk with our running.  There and then we agreed to volunteer for the next 5k Plan and co-lead a group together.

And that was the start of the next chapter in my running journey.

I'd love to cut a long story short but it's just not possible.  Andrea and I have 'history' when it comes to running and my experience with her is what keeps me going and gives me that drive to keep digging in.

When I first started with GroupRun (Summer Plan, 2014) we used to run in the local country park, so it made sense to have an option to run 5k from around week 8. It was a sunny Thursday and I decided to give it a go but struggled for the last kilometre. The end was in sight but I had nothing left inside me so I was going to walk it. Someone came up beside me, spoke some encouraging words and then ran me in for the last few meters, all the time shouting "YOU CAN DO IT.... JUST A FEW MORE STEPS... COME ON... " It was Andrea - she gave me that boost that I needed when I felt like I couldn't go on any more. Almost exactly a year later, I ran my first 'official 5k race' - Run Preston. Blackburn Road Runners were marshalling and on the finish line, giving out medals. There was Andrea, yet again - an arm full of medals and an encouraging smile. I lined up for her to present me with my first ever medal and felt like I'd come full circle. 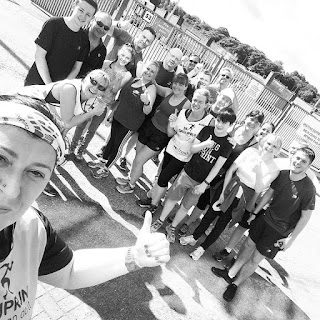 To have her volunteer with me for 9 weeks - along with such an awesome bunch of runners, and a collaboration between two groups - gave me that much needed boost once again. I'm not sure I believe in fate or karma but I do think that things happen for a reason - and you make what you can from a situation.  I chose to take Andrea's infectious sunny nature and use it to keep my own positivity at a high level.

It changed the way I felt about running again. It gave me confidence and a drive to want to challenge myself again... to want to run those 10k distances again.  But how to keep that balance between enjoying being a motivator in the GroupRun programme yet including runs that would increase my distance was a difficult one to consider.  I knew that Blackburn Road Runners held an 'open run' session but this was on Monday's and clashed with my C25K commitments so I bit the bullet and joined their 'Wednesday Club Run' sessions knowing that I'd only be able to run with them for four sessions and then would have to apply to join the club...


That was at the beginning of September.  We're now at the end of September.   Does this mean that I'm actually going to go official and join a running club?  Now there's a story for the next instalment of Fitbitches.  Stay tuned...