Today I Ran My First Half Marathon Today I ran my first half marathon - the Darwen Heritage Half organised by Darwen Dashers.  I was gently poked fun at for choosing this 'undulating' roller-coaster style course as my first half but there was a story behind it (isn't there always?).  Let me explain...

I shared this picture a couple of weeks ago. It was taken at the GroupRun Blackburn Celebration Run (Winter Plan). The caption explained that this is how I feel about running at the moment - totally loving it, feeling accomplished, sticking to a training plan that was helping me run further and stronger, and running back with my old crew again.  Everything felt just right.  I shared the photo the day before a 10 mile race that I'd been training for and explained that my running buddy turned Sergeant Major, Claire, had been pushing me to my limits but was also giving me confidence in my abilities.

But we never got to the race.

Overnight about 6 inches of snow fell making it near impossible to consider driving. Further out, the roads weren't too bad but, even though the race hadn't been cancelled, the snow was still falling here and we had no idea what the true forecast was going to be for the remainder of the day, so we decided not to go. My come-down was awful.  I'd built myself up to complete this part of my running journey with a view to doing a half marathon later in the year. I felt fucked off with the whole situation even though it was out of my control.

I mulled things over for a few days and searched for local half marathons. The main ones (Liverpool and Freckleton) were a couple of months away and I'm an impatient bitch.  I've found my mojo and I sure wasn't letting it fuck off anywhere again. I saw someone mention the Darwen Heritage Half Marathon but had been told that it was a challenging course and most of my friends had only done it the once because it was so tough. The final arm-twist came in the form of our Club Chairperson and some gentle encouragement from fellow club runners.

I bought my place (one of the last 20 places and only 4 days before the event), took a screenshot of the confirmation page and sent it to Claire.

She messaged me back a LOT of swear words and then her own screenshot of the confirmation page.  To be honest, I thought she'd take a lot more convincing than that but after talking to her, she said she wanted to be part of my first half marathon, no matter what it took. I owe her big time for that alone. 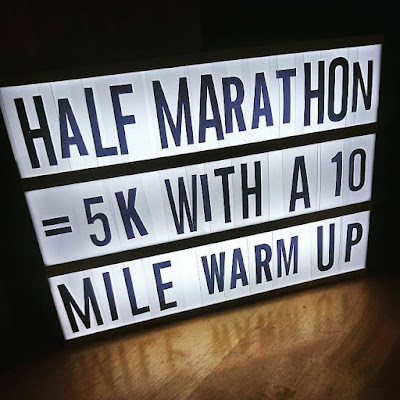 I can't explain it, but I wasn't nervous about this half marathon and I didn't think it was worth getting worked up about it with only a few days to go.  There was lots of gentle ribbing from friends, plenty of  "ARE YOU FUCKING MAD, YOU DICKHEAD" type messages and a number of "I can't believe you've chosen this as your first half!" texts.  In my head it was going to be awful and anything better than that was a bonus!

I was still joking about it all and getting more hyped up. I had a big shock coming, though... 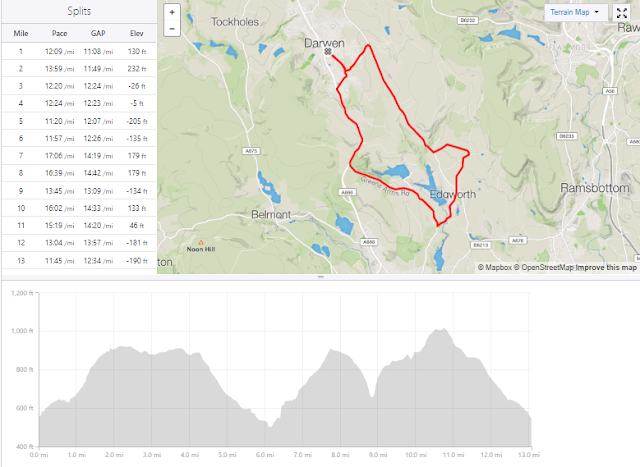 We turned up at race HQ, collected our numbers, had a 'team photo' taken, wished each other good luck and set off for the start line.  The first two miles were uphill out of Darwen and then a gentle run for the next four miles.  My Strava shows that I was running at my average pace for those six miles. Mile 7 and 8 included a HUGE hill and the same again for mile 10 and 11.  There were a few times when I literally thought I couldn't carry on and this time it wasn't my head. My whole body was tired from the uphill - and we were walking a lot more than expected. I got my game face back on for the last two miles and made it to the finish in under three hours.

It's a brutal course.  I understand it's the equivalent of a 16 mile flat route but I reckon someone else decided that after they'd run it for the first time.  However, I've learnt my lesson... listen to my peers!! But the route was incredibly well marshalled by Darwen Dashers and one superhero called Rob who ran the last three miles back with myself and Claire, giving encouragement all the way and collecting drinks for us from the drinks station at 10 miles.

Also, Blackburn Road Runners really do know how to support each other. There were so many club members out on the course, cheering, clanking cow bells, shouting encouragement, blowing whistles, taking photographs and then jumping in their car to move to the next support point to do it all again.  Some ran at the side of us, encouraging us to just push it a little bit more.  Others leaned out of their car window screaming, "NICKIE, GET YOUR HEAD UP. PUSH IT UP THAT HILL. YOU CAN DO THIS. YOU'VE GOT THIS. COME ON!" And all the time, Claire was there, by my side, using her own special method of support - she pecked my head, bitched at me, made me play the Alphabet Game (I think I invented a new sweary version) and pushed me beyond the boundaries of my own limits. I honestly would never have got through today without her by my side. If she hadn't have been running/walking with me she could have easily smashed that route and taken another 30 minutes off her time.

There were also some amazing achievements from our running club as a whole.  "First in age category", personal bests, more first half marathons (see, I'm not the only idiot around here), comebacks from injury, taper runs for the London Marathon and just lots and lots of inspiring people who make turning up to Club Runs each week an enjoyable experience. I've always known that it wouldn't be easy but have a new found respect for people who knock out 13 miles - and more - on a regular basis.

It's done.  And I'm bloody proud of me.  I've received some awesome messages from my friends and my running family - plus I have a nice shiny new medal for my wall and a nice shiny badge for my club jacket. 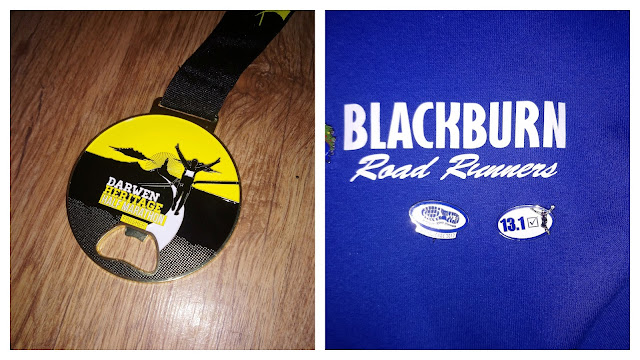