Things I Learnt In March

I can't believe we're at the end of another month already! Anyway, because I have nothing better to do with my evenings, I've been capturing some of my journey around the interwebs and collated it all here to give you something to do.  Here are some of my favourite links and things I learnt in March.

Hey @YouTube, now you've demonetized my channel please can I have my $87 ad revenue or are you keeping that? pic.twitter.com/V8bpDiwgwi
— N I C K I E (@nickieohara) January 17, 2018

YouTube recently took the decision to demonetise channels that had less than 1000 subscribers and less than 4000 hours of watch time. Now it's no biggie to me because even though I have a few videos on YouTube that do very well for views, I don't have the time to invest in 'growing my channel' but I did have some funds in my adsense pot that I felt I was entitled to claim.  There was, however, no information about how to do this - all links lead to dead ends... Six long weeks later, I managed to verify my adsense account again (I'm convinced it had been done before) and discovered that the threshold for withdrawal was £60. After converting from $$ to ££, I had £61 in 'earnings' so withdrew it before they change their rules again! IN YOUR FACE, YOUTUBE.

"Evergreen content" is always valuable.  There's a shit-ton of content on this blog but some of it is pretty timeless and one thing that proves that is the inclusion of this post from eight years ago on the latest BritMums "Kids Say The Funniest Things" round-up.

Super-excited to be one of only five people selected to be part of the pre-read team for @claremackwrites' new thriller, Let Me Lie!! I'll be devouring this over Christmas (OK... let's be honest - I'll have it finished by the end of the weekend) and then I have to come up with questions for Clare that may be included as part of an exclusive extra on the audio version of #LetMeLie I've fan-girled over Clare for a LONG time but we go back years to the time when 'mummy blogging' was in its infancy and we wrote about the perils of parenthood. I love seeing how a massive decision to change career and follow a dream has become a reality - and a hugely successful one at that. It's very inspirational... even if you do wonder what goes on in a psychological thriller writer's mind on a day to day basis. Out March 2018 - pre-order on Amazon now #followyourdreams #writeforpleasureanditsneverachore #needtogetreadingNOW
A post shared by Nickie (@nickieohara) on Dec 15, 2017 at 11:16am PST


I know I've mentioned Clare Mackintosh's new book, Let Me Lie (now a #1 Sunday Times Best Seller), a couple of times before but I was invited to be part of a pre-read team and was asked to submit some book club style questions for an audio book exclusive interview.  I've had a listen to the interview and Clare's answers are really interesting.  If you're a fan of Clare's writing, do go and visit her website as she's currently writing a series called "Building A Book" which gives you a brilliant insight into what happens behind the scenes.

This article - Teen brothers on sex, tech and what their parents don't get - is a fascinating read. Whilst much of the conversation between the brothers could be from any era (my teen years in the 1980s or even my own grown up children's teen years in the 2000's) it shows that social media has created so many more facets to 'growing up'.  Here's a snippet...

Carlos: I love feminism — it’s important. But I hate the super-reactionary, “all men are bad” third-wave feminism that was rampant on the internet when I was 13. It ruins the idea of feminism, which addresses serious issues around gender equality. But they’re right about toxic masculinity. It changes the way that you act. You’re trying to be manly and impress people, and you don’t even realize it until you are called out for being a total asshole.

Liam: It’s disgusting. Men thinking that they are the strongest and the biggest and the best is why we see so much sexual abuse.

I'm always adding programmes to my watch list on Netflix but I never get round to watching many of them unless I veg out in front of the TV at the weekend and have a massive binge session.  My favourite show at the moment is Nailed It which is basically for all the shit cooks who would never get on Great British Bake Off.


The most popular link in last months round-up was my article discovery about Blackpool so here's another. This time, it's a year in the life of the seaside town in 'picture essay' format with images taken throughout 2017 by Christopher Thomond.

It did the rounds a few weeks back but this 'Day In The Life' from Tom Baker - originally printed in the Sunday Times in 1978 - was published on The Poke.  It's absolutely fascinating!

I have two favourite songs this month.  The first is I Hate Love Songs by Kelsea Ballerini which I heard on the Chris Evans Breakfast Show on Radio 2 a couple of weeks back. I'm not a huge lover of country music (apart from the odd bit of Dolly Parton) but this is brilliant!  I'm also IN LOVE with Janelle Monáe's Make Me Feel. When I first heard this I was convinced it was a cover of a Prince song but couldn't work out which one. It was, therefore, no surprise to find out that he had worked with her on this track and her album before he died.

Do you know what colour a tennis ball is? Without having a photograph in front of us, we'd automatically say "yellow" wouldn't we? However, this article, stemming from a Twitter poll, suggests otherwise.  It reminded me of a photograph I shared years ago asking what colour two highlighter pens were.  I saw one as yellow and one as green whereas my colleague saw them both as green but she wasn't colour blind! Furthermore, it reminded me of a tweet from Alex (@numerisphere) that noted the new style LED green traffic lights (in the UK) were now actually blue. I completely dismissed the notion until I was actually stood underneath one a few weeks ago whilst on a run and noticed the unlit light was actually blue! Try and take a look yourself at some point. 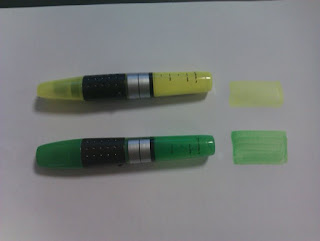 Were you hooked on the podcast, S-Town?  There's another facet to John B McLemore that has just come to light. Did you know that in the last few years of his life he spent time composing and remixing music.  Some were recordings of his own and some was the reworking of a music artist he'd never met.  He exchanged emails with the musician and you can read about some of it in this article - The Secret Music Of S-Town's John B McLemore.  I'm just astounded by the connections this guy made and how his mind worked.  (P.S. if you have no clue what S-Town is then have a look/listen here)

And finally... I like to think of myself as a bit of a grammar/punctuation pedant but I'm old school and still use two spaces after a full stop. Apparently that's not 'the done thing' any more and the Daily Mash published this (joke) article - Last Human To Use Two Spaces After A Full Stop Dies.  I shared it on Facebook and I'm not the only one to do this.  That makes me feel a whole lot better.


I'm going to stop here.  This has been one of the longest "Things I Learnt In..." for a while but I'd love for you to watch out for my new Friday Favourites on Twitter. It's a bit like this but favourite tweets from the previous week all wrapped up in a "Moment".  Here's an example if you still haven't had enough of the random shit that amuses me.  Until next month...

The "hashtag not sponsored" section : Just a quick reminder that any links I've used above are NOT, NO WAY NEVER, UNDER ANY CIRCS sponsored links unless clearly marked. I want to share these little articles because it's what keeps the internet turning and I like to think that this is a fun and interesting way of doing that. If you DO want to chat with me about any of the above - or indeed to find out how to bribe me to include a sponsored link in any of my blog posts then please feel free to contact me. You can find out how to do that on my ABOUT ME page. Ciao for now!
lifestyle