Soundtrack To My Life - David 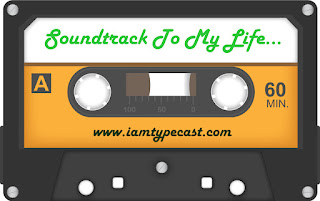 It's been a while since I published a Soundtrack To My Life but this is the perfect opportunity for me to introduce you to an author I have just discovered - David Richards. Here's a bit of the backstory...

Just before I went on a recent trip abroad, I followed a book recommendation from my running pal, Karen. I duly download three books written by a friend of hers because they were on offer at 99p each to my Kindle and immersed myself in them on holiday. They. Were. Brilliant! So I passed on the recommendation to my followers (an off-the-wall, slightly bonkers, Northern humour style of writing), tagged the author and he was kind enough to send me a copy of his latest book with a very lovely handwritten note on the dedication page.

Fast forward a couple of days and I asked David if he'd like to guest post for me at some point but then I remembered my much-loved Soundtrack To My Life series, blew the dust off the instructions and got David to play along. Here are his wonderful song choices and the reason behind his love for each song. Find out more about David and links to his Amazon page at the end of this blog post.

When I’m writing I like to have music in the background. Nothing too intrusive otherwise I get distracted and sing along. Anything from the Carpenters fits the bill.

I loved the Carpenters more than I loved Kylie and Madonna when I was a youngster. I was elated when, in 1994, a tribute album was released called ‘If I Were a Carpenter’. I was less impressed when, after I purchased it, I heard that most of the songs had been re-tooled into grungey, emo type tracks.

Nope. Not for me. It has to be the real deal. Karen on vocals, Richard on piano.

I have a few favourites but I didn’t want to go for the obvious, so I chose ‘Make Believe It’s Your First Time’.

I know that it will come as no big surprise that a gay man whose formative years were the 80s would be a fan of Madonna (and Kylie, but more on her later) but there you have it. I’m a cliché!

I wasn’t a huge fan of Madonna until I saw her ‘Blond Ambition’ tour on Sky in 1990. The sheer spectacle of the concert had me HOOKED!

Until then I’d enjoyed ‘True Blue’, and ‘Into the Groove’ but I wasn’t an actual fan.

I went to see her in ‘The Girlie Show’ in 1994 and it was the best concert I had ever been to, which isn’t really saying much as she only had ‘New Kids On The Block’ to compete with at the time! She didn’t just stand there and sing (or sometimes mime). She actually put on a show!

I’m not particularly keen on much of her stuff after the ‘Ray of Light’ album, but her early stuff still hits me right in the nostalgia.

My first novel, ‘The ‘Lovely’ Past’, features a few Madonna songs and my most recent novel, ‘Grounded’ also has a Madonna number in it, but I haven’t chosen any of those.

Another shameless plug for my first novel, ‘The ‘Lovely’ Past’.

‘Wicked’, the musical, features heavily in the book as a sub plot. My time travelling protagonist, when tasked with writing the school musical, shamelessly plagiarises ‘Wicked’.

I LOVE this musical. I love lots of musicals (I know, cliché again!) but this is my all time favourite and, while there are so many songs to choose from, ‘For Good’ is my absolute favourite.

Honourable mentions have to go to ‘Popular’, ‘What Is This Feeling?’ and ‘Defying Gravity’.

A cheeky little bonus song here would have to be ‘You’ll Be Back’ from ‘Hamilton’. While I didn’t actually enjoy the musical and don’t see what all the fuss is about, that particular number is a delight.

I struggled with this one. I wanted a song that embodied the mid to late 90s when I first started going out. There was one gay pub in Blackburn, The Wheatsheaf, and a club night on a Sunday at ‘C’est La Vie’. We were very limited with our nightlife choices. Occasionally, somebody with a car would drive us to Manchester or we would go to some pub in the middle of nowhere to watch a ropey old drag queen.

And I LOVED it! The internet wasn’t really a thing, hardly anybody owned a mobile. A few of us had pagers, but they were only for emergencies. There were no selfies or Instagram stories. We just watched the act and enjoyed ourselves.

They would play these camp disco classics that I hadn’t really heard before but grew to love. There were some, like ‘Round The Old Camp Fire’, that came with a dance routine, and some that were just pure disco.

I think that this track has it all. Joyous and infectious from start to finish.

Whenever I see a ropey old drag queen nowadays, I’m transported back to that much thinner, ever so slightly younger version of myself.

Kylie Minogue – Off With His Shirt

Although this track comes very close.

Like Madonna, I’m not too keen on Kylie’s later songs. I much prefer her early stuff. She went a bit funny in the 90s but that’s what you get when you hang around with Michael Hutchence. Then, in 2000, she went back to pop, which I think was very wise. Stick to what you’re good at.

I very nearly chose ‘Your Disco Needs You’ as my Kylie track (I love shouting out the French bit in the middle) but this one has it beat.

If you were asked to describe ‘camp’, all you would need to do is play this song.

David Richards is a charismatic, mysterious gentleman in his late 20s with a zest for life and a yearning to sing. He lives in Manchester with his husband and two children, Rula and Jinkx. You can follow him on Facebook and Twitter but, most importantly, you can download his books from Amazon