June 09, 2013
Our house is a little bit quirky in the fact that it's like the TARDIS.   From the outside it looks like a northern mill town two-up-two-down but it's wider than it looks and stretches back quite a fair way.  It is a corner terrace with no gardens and was built somewhere around the turn of the century; we believe 1899.  The house hadn't been updated in about fifteen years when we bought it but it was one of those houses that we knew we wanted as we walked into the hallway.

The inside isn't anything special (apart from the fact that it has five bedrooms) however this original cornice is in the hallway.  We have only cleaned it up and painted it and found nothing else as interesting in the house when stripping back and modernising. 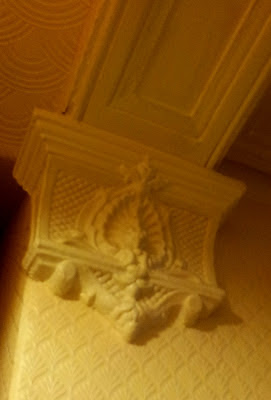 My wall hangings have matured with me over the years.  I was never one for keeping anything that the children created (you can read about that on The High Tea Cast) but I do have loads of photographs in those multi-aperture frames.  I also have a few of my own cross-stitch pieces lining the stairs and family pictures on canvas but there are a couple of special pieces that mean way more to me than to the rest of the family.  They're just not as sentimental as me, I guess. 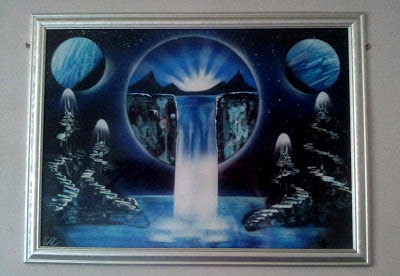 This piece was created for us by a spray can artist in the street in Ibiza whilst we were on holiday.  I can't remember the price but we bought two - the other one is slightly smaller and has a purple hue.  It was gifted to my daughter when she moved into her first house.

It is amazing to see a blank canvas turn into a futuristic piece of fantasy art in front of your eyes, in the street.  If you've not seen spray can art before, take a look at this clip on YouTube when you've finished reading here.

This picture hangs in our main lounge. 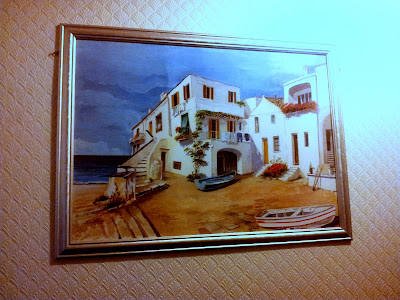 Again, from Ibiza, I found this picture at the Hippy Market in Ibiza.  The signature says "B Ceruttitlugo" but I've failed to find anything out about him/her.

Every time I look at it, it whisks me back to the island and when we retire to Ibiza this is the sort of house I want to live in.  Traditional white stone, near the sea, in the back of beyond.

This picture hangs at the top of our stairs. 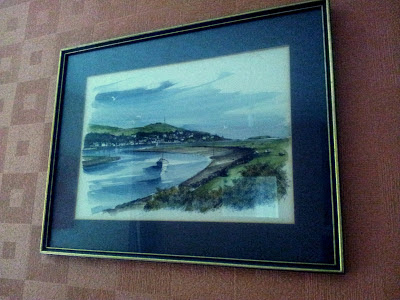 Many of my childhood holidays were spent in the caravan, in a small fishing village called Kippford in Dumfries and Galloway.  I have happy memories of beaches, rockpools, evening walks to the pub, the little village shop and secret hill top walks.

Mum had bought two paintings of Kippford and had them hung in the hallway of her house.  When she died, my sister and I took one each.

My picture now hangs in my bedroom.  It's the first thing I see when I wake up in the morning. 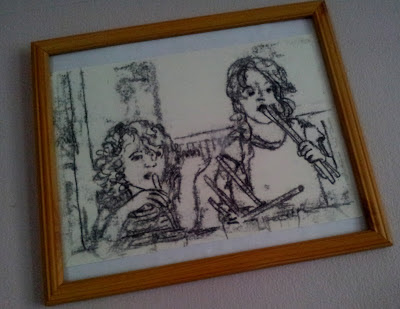 An artist called Natasha Gomperts offered to recreate a favourite photograph of my grandchildren using a technique called "monoprinting".  When she sent me the finished article she included a few extra prints of different sizes.  Some were dished out to family and I kept this one.

Whilst I recognise it as a photo I took, I love the hand-drawn feel it has.

This picture hangs in the main lounge. 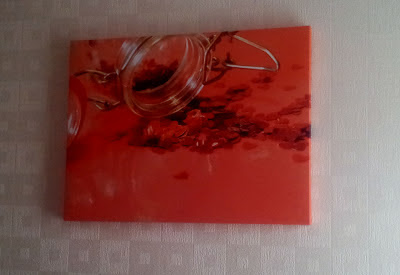 I go on and on and on about a photo set I took a couple of years ago which I called "Jar of Hearts".  I had my favourite shot blown up (it's HUGE) and put on canvas.

This now hangs above our bed and all my husband could say was, "I hope it doesn't fall off one night and kill us in our sleep."  Which says it all really...

I got the inspiration for this post from Michelle who blogs at The American Resident but would love for you to share what art work you have hanging in your home?  Let me know in the comments.