My Personal Battle With Running

Bear with me.  This will start on a downer and we'll work our way up from there.

When running alone, I hate every single step I take. Most probably because, for the past two years, I've been embedded into the most wonderful community running group - GroupRun Blackburn - which has taken me from being a non-runner to someone who can choose (that's the key word there) to run 10 kilometres. The GroupRun ethos is a hard one to explain to anyone who hasn't experienced it but you make friends, you see personal goals smashed out of the park and you celebrate each other's achievements, all whilst being coached and encouraged to do better and better each week, clocking up mile after mile along the streets of Blackburn.

This time last year I ran my first ever 10k - the Windmill 10k, organised by Fylde Coast Runners. I ran it in a time of 1.13:18 at a distance just short of the full 10 kilometres. After that I was plagued with a series of knee issues and in December 2015, was advised to stop running completely for a while as I had a Baker's cyst and was diagnosed with arthritis in the knee joints.  I returned to running with GroupRun Blackburn in March of this year have have since taken another three groups through the 'Couch to 5K' programme. I also ran another 10k in July, finishing with a time of 1.18:29 - and I was disappointed with myself because I'd had to walk some of the way too.

I have beaten myself up constantly about personal achievements - I know it's pathetic but I'm always conscious of wanting to be a better version of me. Therefore, I've made a decision to make this winter all about how I can do that with my running. I've joined one of our community progression groups and I know I'll be pushed, especially when it comes to pace.

Which brings me to today. It was tough taking the plunge, especially when I have felt so under-confident, but I needed a challenge.  And that challenge was going to be the Windmill 10k again.  A year had passed, so much had happened physically and emotionally, but I knew the route and, as I've spoken about many times, the Fylde coast is my happy place - it's where I grew up, it's where my roots are, it's where I feel grounded.

I knew a group of runners were being paced to complete the run in 1 hour and 10 minutes. Something completely out of my grasp but I made the decision to set off with them to see what the pace was actually like. To my surprise, I kept up with them for about 2.5k but then I knew I couldn't maintain it so I slowed a little... but I'd found a comfortable stride - something faster than I normally run but completely manageable.

It was a bloody lonely run. It's always hard to move from a community atmosphere which is encouraging and heart-warming to being the only person responsible for what happens.  I looked out for little landmarks to help myself along the way and refused to look at my watch until the halfway point. The saving grace is that it was absolutely perfect running conditions.  Granny's Bay and the Ribble Estuary was as smooth as glass and there was no sun, no wind and no rain (such a change from last year when *that* altercation with dog walker happened during the race, the rain came down sideways, I was chilled to the bone and it took me two whole days to feel warm again) 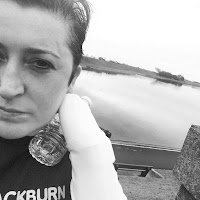 So now the best bit. Last year's Windmill 10k measured a little short at 9.94km - I know it's just a few metres but it matters.  This year the route had a slight change and measured at 10.11km.  I've done the maths and this happened:

You have no idea what this means to me - it's more than a huge confidence boost! It proves to me that I should take things at my own pace and maybe just push myself a little bit more than I think I can.