February was such a short month - as it always is - so this update has spilled into March to make it a bit more interesting.

Resharing old blog posts is sometimes worthwhile. I'm very adverse to having my photo taken as I never ever like the way I look in photographs. I tweeted the link to a blog post from last year which asked, "Why Am I Not Photogenic?" My friend Claire read the article and found me an answer from Smart Photography which explains the science behind the perception. I was very intrigued with the theory behind having less photos of yourself (guilty as charged, m'lud) means that the only image you see of yourself is that one in the mirror.  Have a read of the article and see what you think.

(NB: I'm still adverse to the oversharing of old blog posts and the use of ICYMI and Halloween posts in March or Christmas posts in June... just saying)

Getting a photo of your grandchildren all together is nigh on impossible. Especially when one of them will do anything to sabotage the process (she only let me take our family Christmas photo because I said it was OK to pull a funny face)!  I did end up with a nice one eventually but the other seventeen made this hilarious gif.


The message for this year's International Women's Day was #BeBoldForChange and in our local area a poster campaign was launched to highlight five inspirational women who have made a difference to people's lives in Blackburn and Darwen. The reason I've mentioned this is because the Chair of Blackburn Road Runners is one of those women and her face and message can be seen on bus shelters across the town. Of course, this makes for great photo opportunities when out on runs - some of the pictures that have been shared in our Facebook groups have been quite funny! It did give me food for thought though. I would love to be able to give more time and effort to make a change but other parts of my life take priority. Maybe one day, eh?

The pursuit of happiness isn't a modern day concept but can be brought into play for modern times. My running friend, Cathy, talked me through a bad run a while back and mentioned the four levels of happiness, originally identified by Aristole (he wasn't on the run with us - he died in 322 BC). The levels are thus:

I mentioned that I feel very much at Level 3 most of the time yet I haven't touched upon Level 2 so wondered how that could be. But I think I was getting mixed up with Maslow's Triangle which is where you have to have achieved one level before you can move onto the next. This tier of happiness means that you can jump around depending upon your mood and/or your circumstances on any given day.  Which level are you at?

The collaboration between SORTEDfood and Co-op is drawing on the cooking skills gap in the 16 to 35 year old age group (you can read more about their research here and here - honestly, it's very eye opening). My youngest child (now almost 18 years old) really enjoyed and was very successful in his catering course at high school and still enjoys cooking a meal for us all from time to time. Co-op and SORTEDfood sent us a box of ingredients and the recipe to make roasted vegetable couscous which was so simple and tasty that we've been working our way through their recipes on the Now Cook It website. It's also worth checking out the SORTEDfood YouTube channel too!

I have short hair envy again. Over the years I've lusted after the styles of Pink, Rhianna and Kris Jenner. This time it's Jennifer Hudson and Emma Willis. I have short, undercut hair but it's very fine and doesn't hold its style very well, regardless of the cut. I've yet to find hair happiness (I'm seeing this month's theme now... are you?) but I'm almost there - it just needs to be a bit longer. 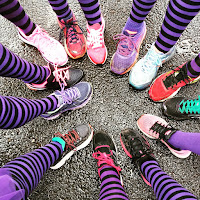 Some companies absolutely understand how social media works and one of those companies is the Stroke Association. I participated in one of their charity runs earlier this month (it was the Resolution Run at Heaton Park in Manchester but I'll talk more about that in my next Fitbitches update) and shared photos and updates on social media throughout the day. I was really surprised to see responses from their online team on Twitter and Instagram in real time at the weekend and I was also chuffed when they used one of my photos in their live Instagram Story from the day. They have continued to engage and I know a number of companies that could learn some lessons from them!

Always look to support local businesses. I had been raving about Renton's updated 'Choose Life' monologue from the new Trainspotting T2 film and a friend tagged me in a picture of a mug with it printed on but at £10 I thought it was priced a bit high. After seeing the update, a friend got in touch to say that the company she worked for was moving into the printed mug business and would I like to see a sample of their work with this monologue printed on. Um... let me think about that... HELL, YES!  So she sourced copies of the monologue and the film banners and created two mugs for me - one with the monologue from the first film and one with the monologue from the second film. Don't they look cool? Anyway, take a look at the Printed Cup Company's offerings, especially if you needed bespoke cups for gifts or for an event (also on Twitter / Facebook / Instagram / YouTube).

The Video Of The Month Section

Normally I select just one video that has really captured my attention however there are three that I just can't choose between for completely different reasons.

The first is a short film (bear with the editing - it's a bit amateurish) about raves in the North of England. I'm convinced I attended one of the raves in Blackburn in the video (in 1990) but can't be sure as I was always completely oblivious as to where we were going in the car!

The next is from Walk Off The Earth and is a celebration of their rise to popularity after they filmed themselves playing one guitar, singing their version of Goyte's "Somebody That I Used To Know" - it went viral and has introduced them to a much wider audience. I still think they are hugely underrated and have so much talent between them - and some of their music-making methods are unbelievably wacky but innovative.

The last one is (in my opinion) another underrated group - Pentatonix - and their collaboration with Dolly Parton for a reboot of the song, Jolene. You may have seen/heard them sing it on an episode of The Voice USA with Miley Cyrus but this is a much purer edit. As an aside, this song will be being mentioned in an upcoming Soundtrack To My Life but more on that at another time...

And to finish... let's look at how the Motorway police have a great sense of humour. This tweet proves it! 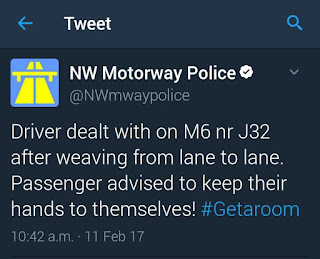 Don't forget to share your new found wisdom with me in the comments.

What can you teach me this month?