June 21, 2018
A reminder appeared in today's Facebook memories.  It's four years since I did my very first session of the Couch To 5k plan with GroupRun Blackburn. At the time, I had no idea how much it would change my life. Apart from a three month break for a knee injury (the L O N G E S T three months of my life) and the occasional holiday, I've been running three times a week for all that time. I've become a Group Leader (by mistake - long story), I've coached hundreds of people through the plan and beyond, I've made life-long friends and I've found a hobby that keeps me sane(ish). 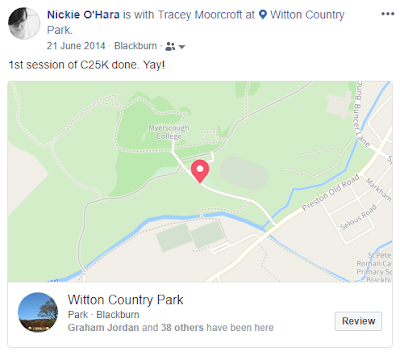 But things have moved on from then too. I've joined a running club, I've completed my first half marathon (with a second coming up very soon - EEK!) and my whole attitude to running has shifted from it being a place for me to be Bossy Nickie to a place for me to challenge myself and push myself further than I ever imagined.

The other day I shared a 'side by side' photo on Instagram and a Facebook group as a six month update for running and weight loss.  During that time I've swung between doubting my ability as a runner but also enjoying upping my distance to tackle the half marathon distance - something that I never thought would even be achievable at the beginning of the year.


The picture on the left was taken in January at the end of the East Lancs Hospice 10k. I'd run with a friend on her debut 10k and we'd both found the run tough but enjoyable - we were very glad to see the finish line though! The picture on the right was taken in May about 2/3 of the way round the Wesham Summer 10k. In between those races I've completed the Darwen Half Marathon, changed my training schedule to include one off-road run a week and one long run a week and I've lost almost two stone in weight. The times I clocked for each 10k race were 1.21.54 (January) and 1.11.07 (May) - a full 10 minutes difference!! Now, it's obvious from those times that I'm a slow plodder but this one comparison gave me a much needed boost just when I was starting to feel a bit meh about all the training I was doing.

I always get amazing support from my fellow club members and the gang that I run with regularly but something my boss said to me this week also put everything into perspective. I was explaining about the long run training required for a half marathon and mentioned the 10-mile run last week and the 11-mile run planned for this week. She looked at me and said, "Ten miles? Ten actual miles? That's like from here to..." and she couldn't even think of anywhere 10 miles away to compare it to. So I explained about our community running group sessions keep me going and how much my runner friends inspire me but she turned back and said, "Ten miles... on a Friday... after work? You underestimate yourself."

And, yes, I probably do. It's no secret that I find running really hard work every time I set foot out of the door. I'm not one of these people that can go out and 'lose myself for an hour' whilst running.  But I look at those two pictures, I see the weight loss, I count up the miles that I've run since the beginning of the year and I think I'm ready to accept that all the hard work is actually having a positive effect. If I can accomplish those small goals in just six months, where could I be by the end of the year?

I miss my Couch To 5k sessions like I miss smoking. It's something I had to give up to improve in other areas - but it's also something I crave. Even after four years, I'm still very much involved in GroupRun Blackburn as I'm part of the Management team and I run all the Facebook pages for the plan. It's wonderful to see people that I coached and/or ran with either continuing to be part of the running community in the may ways that we offer, progressing up to 10k and even taking the leap to join Blackburn Road Runners themselves.

So, aside from all the training, there hasn't really been anything else going on this month.  I've been micro-blogging each run on Instagram (you can follow me over there if you like) because it feels easier to analyse everything by breaking it down like that.  I'm convinced my non-runner friends are bored with all the running talk but I suppose they can scroll past or unfollow if they don't like it, can't they?

But one lovely thing that did happen on social media at the beginning of the month was being tagged in the tweet below.  I got a bit emosh about the fact that my own half marathon recap helped someone else calm themselves down before their own half marathon and I've found a new twitter buddy to my ever-growing list of "Sole Mates".  Bonus!

Had a massive wobble before Sunday’s half m. Almost meltdown because I couldn’t find MY waterbottle. Sat down & read newly found blogs by @Fattymustrun @DNisbet1808 & @nickieohara
Had a great run. Twitter can be a great place. And I match my flowerpots pic.twitter.com/AhfgSOvEtQ
— Alison Moss (@AlisonMossCI) June 4, 2018


I've only got a couple more training sessions this month and then the Southport Half Marathon is on Sunday 1st July.  If you're in the area on the day and see me limping past, looking like I'm about to burst into tears, give me a shout or chuck me a jelly baby and tell me to get the fuck on with it!  I'm expecting to finish in around 2 hours 45 minutes - just in time for lunch!