Things I Learnt In July

...and maybe some things I learnt in April, May and June too because it's been a hella long time since I wrote one of these blog posts.  But what I do is collect little articles I find and thoughts that have and when I get ten minutes to myself I try and pull them together into a half decent blog post.  So here's a few things that interested me and I hope they interest you too! 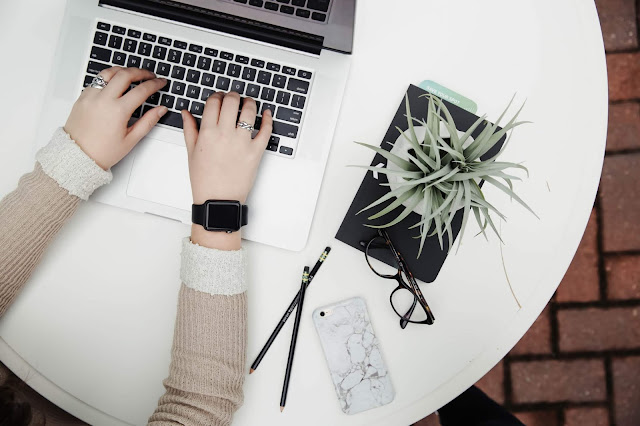 If I lived on Mars I'd only be 24 years old but if I lived on Venus I would be 79 years old. This cute little sub-website from Go Compare gives you a number of facts and figures about planet Earth since you were born.  Give it a try!


I fell in love with Lady Gaga's version of Your Song from the album, Revamp, which reimagines the songs of Elton John and Bernie Taupin.  But when I shared it on Twitter, my friend Toni sent me this article about why we tend to sing in an American accent because she thought Gaga sounded as though she was putting on a British accent (she's pretty qualified to comment as she lived in America for 20-odd years before moving back to the UK recently).

At one point in the film, the bad-boy character, John Bender, ducks under the table where my character, Claire, is sitting, to hide from a teacher. While there, he takes the opportunity to peek under Claire’s skirt and, though the audience doesn’t see, it is implied that he touches her inappropriately.
[..]
But I kept thinking about that scene. I thought about it again this past fall, after a number of women came forward with sexual-assault accusations against the producer Harvey Weinstein, and the #MeToo movement gathered steam. If attitudes toward female subjugation are systemic, and I believe that they are, it stands to reason that the art we consume and sanction plays some part in reinforcing those same attitudes.

If you're of a certain age *cough* like me *cough* you'll remember saving foil milk bottle tops and rubbing them smooth with your thumbnail to make a mirror for your Sindy house, yes?  Well, in Japan they are taking it one step further by turning 16 metre rolls of aluminium foil into beautifully polished balls.  LOOK!!

I am sure you all saw the Twitter challenge that took off the other day – a request to women to “describe yourself like a male author would”, started by the writer Whitney Reynolds. There were thousands of hilarious replies, with women imagining how a bad male author would describe them. I thought about posting an example, but then realised, I didn’t have to imagine this. I’ve been being described by male journalists for more than 35 years.

It continues with a summary of how male journalists have described her over the years but it's become par for the course as there is a lack of female (music) journalists out there.  She also notes that whilst there isn't a lack of amazing female musical talent out there, the imbalance of representation at music events suggests there is. [h/t to James Whatley for this article - it appeared in his "Five Things On Friday" newsletter which you MUST subscribe to even though it's on hiatus for the summer!]

Whilst I was on holiday earlier this year I was GLUED to the book "Ready Player One" by Ernest Cline.  Seriously, it's an awesome read, set slightly in the future, with a realistic feel because of the way we are already embedded into virtual reality gaming. I've since watched the trailer for the film (I'm always YEARS behind with these things) and, for once, I don't think the film is going to do the book an injustice.  I'm going to have to set aside some time to watch it.

By the way... don't bother with the Netfix original "Ibiza".  It's shit. And the reason it's shit is because the producer didn't even bother to go to the White Isle at any point in his life.  So, if you make a film about Ibiza, you don't actually have to go to Ibiza - nor do you even have to shoot any of the footage in Ibiza.  IT'S TRUE - it's all here in this article on Mixmag!!

It would seem quite shocking to a music fan or someone who’s been to Ibiza a lot that the film would be made without the director having not actually gone to the island. It’s a very spiritual place and it’s a place where people have founded a lot of great memories. Through watching the film it felt like a lot of that essence had been lost. I think you have to have seen the island and experienced it to really get it. With that being said, that means you haven’t been to any of the clubs in Ibiza as well right?

*long silence* I haven’t been to Ibiza.

And staying with the theme of people really showing themselves up in interviews... just in case you missed it, here's Gemma Collins being a dick diva. I'm not even going to quote any of it as a spoiler because it's so jaw-droppingly awkward!

Anyway, Netflix might just have redeemed themselves by making the most awesome series available to view.  The Kath and Kim boxset has been on my Amazon wishlist for as long as I can remember but, here it is now, in all it's glory, for me to binge-watch! 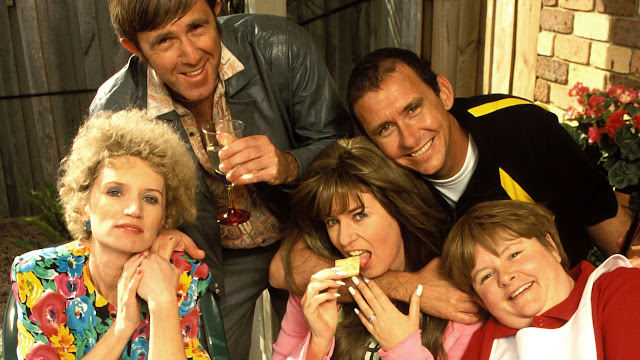 I was reminded that it's probably about 16 years since I started talking to strangers on the internet.  This is just part of a conversation that popped up on a friend's Facebook Memories the other day and, as you can see, we were trying to work out exactly how long we'd all "known" each other.  Sixteen years is a bloody long time.  I do remember though that my husband though it a bit odd (and still does) that I talked to "strangers" on the internet but then I reminded him that he did (and still does) the same with his amateur radio hobby. 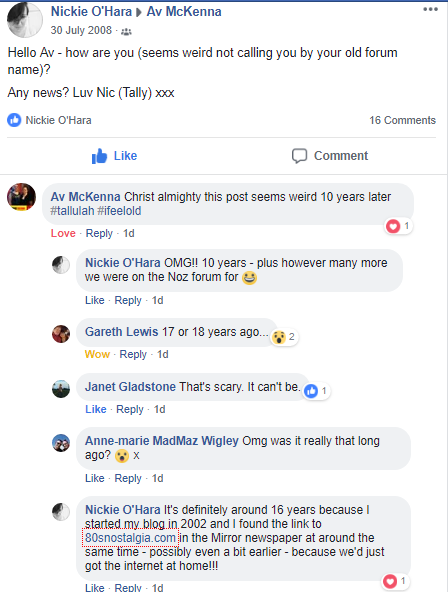 And speaking of strangers on the internet, you may have seen me talking about the recent loss of a very dear blogging friend - Kate. A few things have happened since the very shocking news... Firstly, the fund that was set up to pay for her funeral is now at over £13,000 in donations which will hopefully help her boys through the next few dark months as they come to terms with what has happened.  Secondly, many bloggers, old and new, have reconnected with each other to celebrate Kate's life by mirroring her take on life - you can follow the hashtag #BeMoreWitWitWoo mainly on Instagram and Twitter to see everyone's interpretation of this. Thirdly, and probably most randomly, is the piece of jewellery that I found myself "designing" which will also put money into the fund. It's a long story but... I ordered myself a leather bracelet from Hope House Press and owner Liz (a friend of mine) sent the order out really quickly.  I messaged her to thank her and she said that she loved the phrase that I'd chosen to have embossed on the bracelet - CHOOSE LIFE - CHOOSE LOVE - and that she had an idea. She thought the phrase really captured the whole "Kate" situation and wanted to make it available to raise money for the boys' fund.  So, within an hour of me receiving the bracelet, I became an arm model and "my bracelet" was available on the Hope House Press website for anyone to buy. 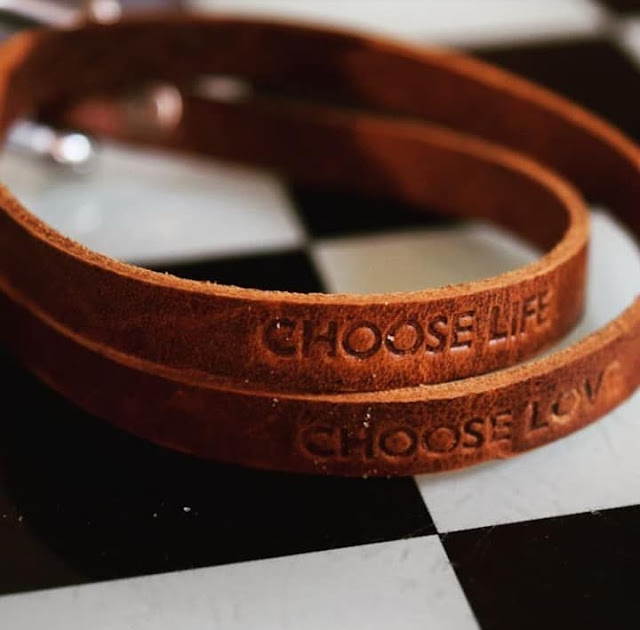 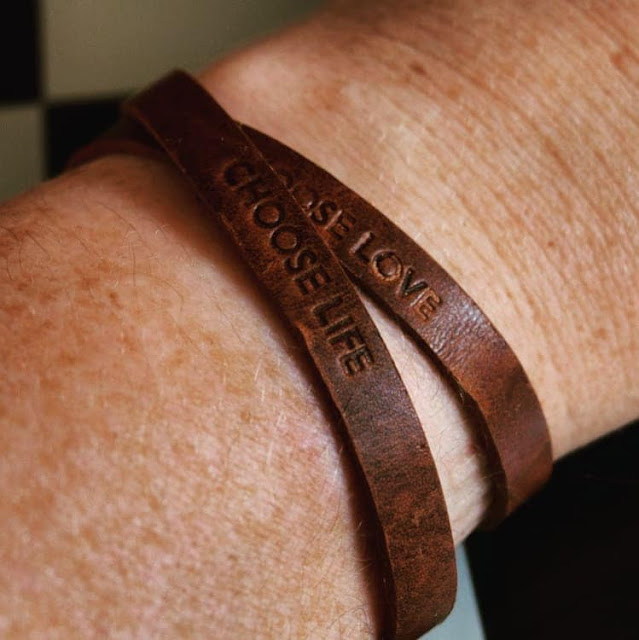 And I think that is the perfect place to finish this month's "What I Learnt In..." Don't forget to get in touch and let me know what you've learnt recently too.

Oh... the usual "hashtag not sponsored" section.  This bit is boring now but, just so you know, none of the above links are sponsored in any way - and if they were, I'd let you know. This is just my way of sharing the love around the internet and keeping myself, and maybe you, amused.  If you ARE interested in contacting me about how to work with me then you can click this link for more info.
lifestyle