I Thought The Second Half Marathon Was Supposed To Be Easier? 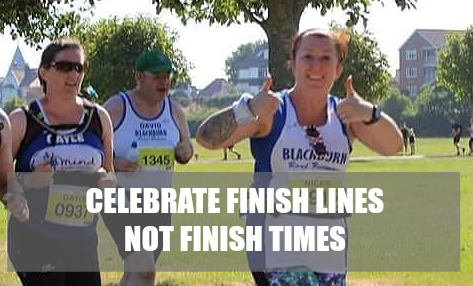 I can look back at my first half marathon with hindsight and see where I went wrong.  I chose one of the toughest local races and rushed into a decision after training for a different distance. Post-race, it took me a while to get back on my feet properly but aced a course personal best at a local parkrun, took the trainers to Tenerife for a bit of a holiday jog and managed to score a 10k personal best time at a mid-week race. I also started mixing in a bit of off-road trail running just to liven things up a bit - nothing too extreme but short, sharp shocks to the system, and huge hills to work the thighs!

Running was fun again so I was ready for another challenge.  Enter, stage left, the Southport Half Marathon.

Now, I wasn't going to make the same mistake again, and I'd already started to put in some long(er) runs with Claire even though we didn't know what we were training for yet so it was just a case of upping the mileage each week and taking it from there.  And whilst it was tough, it was enjoyable - I used to drive home from work on a Friday, pull on my running gear, order a takeaway for when I got home and drive to meet the gang at a random point on the outskirts of Blackburn to take our weekly long run in different surroundings.  Over the five weeks I got stronger and faster (OK... we're not talking Paula Radcliffe territory here but knocking a good minute per mile off my average speed) and I knew that I felt more than ready for the half marathon rather than just winging it on the day.

The plans were made and I was ready for the 1st of July. Enter, stage right, the 2018 British Heatwave.

Now, when the media report on a "heatwave" it usually means that the mercury has risen to around 20 ℃ and we're all fanning ourselves for around twelve hours.  But this time temperatures were averaging 25 ℃ (77 ℉) and they were here to stay!  Luckily, the rise in temperature started on taper week so I only had to do a 6 mile run and a 3 mile run but even they didn't get me acclimatised effectively and the nights were too stuffy to be able to sleep properly.  I prayed for rain, or at least a cool morning for Sunday. 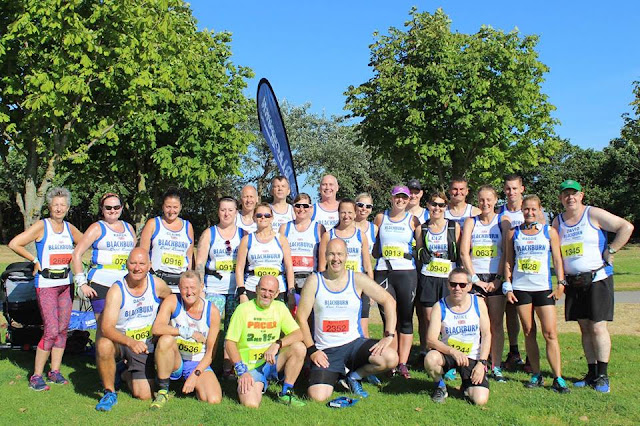 On the day, I double-dosed on my antihistamines and piled on the factor 30 sun cream, then drove to Southport.  Our crew had set up camp near the finish line but there were promises of familiar faces to be dotted around the course.  The start line was heaving because the 10k runners and the half marathon runners were all starting at the same time with a split in the course at around the two mile mark.  I set off, found a good plodding pace and decided to keep going for as long as I could. 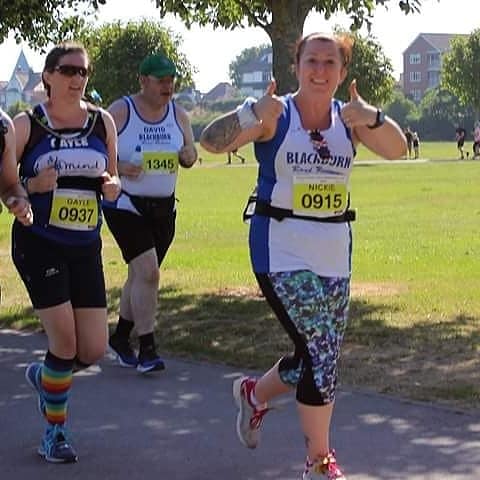 My long-time internet friend, Annie, lives in Southport and she promised to be outside Costa with a brew cheer for me so that was a lovely boost just after the start of the race.  I leapt onto the pavement to give her a sweaty hug and she promised to see me on the coast road later in the race. I made my way around the course trying to run in the shade where possible and taking on water at the first feed station.

I was OK until the five mile marker when the temperature rose again - but suddenly, just like when the plane door opens after you've landed in a hot country. We were now on the first three mile (completely unshaded) section of the coast road and, unusually for Southport, there was no breeze AT ALL. I made my way to the feed station at mile 7 and refreshed my water bottle, taking another bottle of water to dribble on my head, neck and wrist band.  The next mile or so was a double-back section so I passed some of my fellow running club crew who were ahead of me and we shouted encouraging words to each other - but everyone was absolutely melting in the heat. 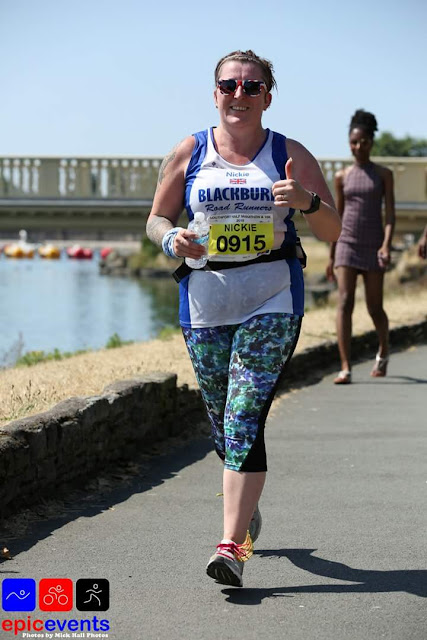 The next few miles were a run/walk effort and there was a group of us all doing the same thing but not really in sync with each other so we kept over-taking each other, giving positive encouragement, passing out Fruit Pastilles, secretly trying to work out who had the best technique so we could follow it to power on through to the end. One of the girls was "Jeffing" (a run/walk method created by Jeff Galloway) to the start/stop beeps on her watch and it was fascinating to watch.

More feed stations meant more water and, gratefully, more dousing.  I saw Annie again at around 11 miles and treated her to another sticky, water-soaked hug.  She took a photo of me and I now realise that all the water had provided an unintentional wet t-shirt competition which I definitely wasn't winning any time soon! I was also met by Annika and Joanne a bit further up the coast road who were providing more support during the longest final three miles ever! 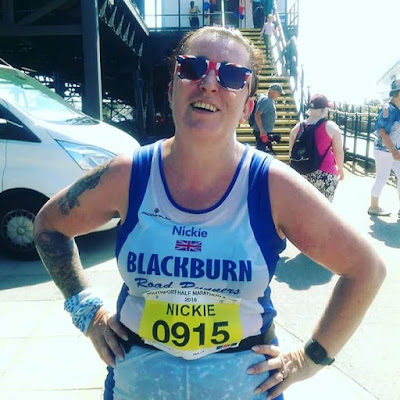 It got down to the last mile and I decided to try and break from the pack - it was every woman for herself now! I could hear the commentary at the finish line (a familiar voice wafted across - the dulcet tones of my friend, and fellow podcast host, Rowena) and the merriment of the supporters and I knew that I just had to run as much as I could for that last stage.  Ellen met me at the gates of the park and gave me about 100 meters of side-by-side running encouragement which helped me to regain focus and hold my head up and shoulders back.  I weaved my way through the park and headed for the recognisable sound of the Blackburn Road Runners cheer squad lining the path to the red carpet finish. 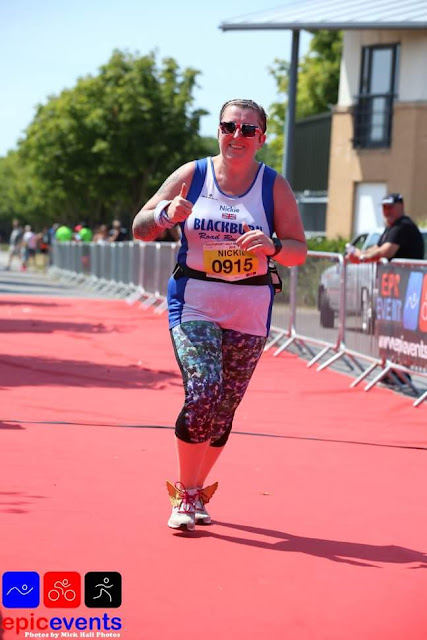 It was hot... SO SO HOT... the local weather reports suggested a high of 28 ℃ (82 ℉) and it's really hard to explain how difficult it was to run in that heat. Absolutely every credit to the race organisers - Epic Events - the volunteers, race angels and marshals who were full of positivity and encouraging us to take more than one bottle of water and a gel if we needed it.  Thanks to the Factor 30, I'm not sunburnt anywhere other than my eyelids and my nose due to the profuse sweating although my tan lines suggest I should only wear vest tops for the foreseeable future. 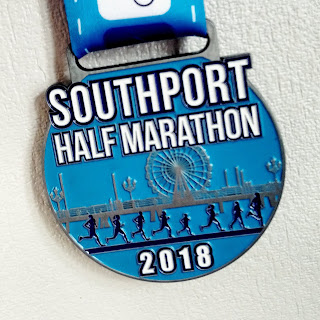 At the end of the day, this race was still another personal best time for me - around five minutes faster than my half marathon in March.  During training I really did think I was strong enough to complete a half marathon in around 2h 45m and, under better conditions, I still think I could - maybe even a little bit faster. Plus, I didn't have my traditional mid-run wobble because there was so much to distract me, no-one to moan at and no hills to climb.  It has been mentioned that both half marathon attempts have been extreme in their own ways so I looked at signing up for another local half marathon that's a couple of weekends away but the hot weather is forecast to continue and I don't think I want to put myself through that again *opens up laptop to check prices*