July 21, 2020
So, back at the beginning of lockdown, I embarked on a fresh "couch to 5k" journey. I was running solo and wasn't all that keen so I tried to take the dog along and he hated it just as much as me, refusing point blank to run by week 3. I had a little moan about it and a few running friends said they felt the same - they wanted to kick-start their running again, missed group running and needed a way to 'buddy up' with someone. And so the "LOCKDOWN C25K" group was born.
It was a small, but perfectly formed, group which was for those few running friends who needed an excuse to get out and wanted to be accountable for their runs, in a similar way to the structure of our community C25K group in Blackburn but away from their main Facebook timeline. This, however, wasn’t about being a brand new runner, or running in groups, or to have everyone running on the same day at the same time but about having a place to say “I DID IT” and know that if you couldn't be arsed moving off the settee for your third run of the week, you could have a bit of a private whinge about it and the others in the group would give you that boost you needed to pull on your trainers and get out of the front door.
Even though we were all at different points of the plan, we decided to plan our own 5k Celebration Run route and I thought it would be great to have a medal as a memento of this achievement during a difficult time. An ethical medal maker was sourced from Etsy [Sophella Crafts] and a unique design was created. Everyone chipped in for the cost of their own medal.
And here it is... the unique finishers medal for our little group. It even has a secret message on the reverse that was our 'mantra' in the group. 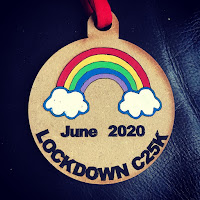 Since restarting the C25K plan, I've found a bit of my missing mojo, have tackled some trail running head-on again and ticked off a few running goals I set myself at the start of lockdown. I know I need to work on my stamina and consistent running pace but I'm feeling better each time I step out the front door. 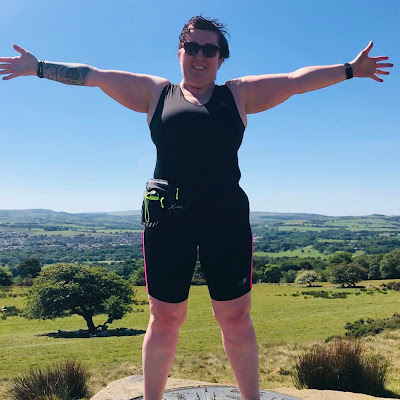