Soundtrack To My Life - Lee 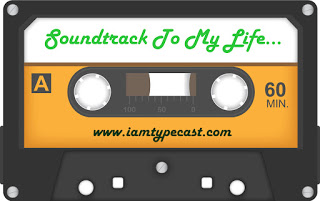 When I went for my initial interview / introductory meeting at Ribble FM, I met the Studio Manager, Lee Roe. As we got chatting, we discovered that we were both licenced amateur radio operators and he knew my husband! I'm still not sure if that was a good thing or a bad thing... anyway...
Lee is the Station Manager at Ribble FM in Clitheroe and always been involved in music from working at Ames Records when he was 14 to DJ'ing, being in a band playing in pubs, and clubs and even a host/DJ in a cruise ship nightclub.  He tells me that music takes him everywhere, fixes many things and keeps him sane.   Lee is a very social person, loves being around people and having a giggle.  He has been a single dad for 21 years, is a self-confessed complete and utter lazy bastard foodie who cooks every day and loves making food for people to enjoy.  Music + Food = Life.  So now, it's over to Lee...
¨¨°º©©º°¨¨

This was the first 45' single I ever bought with my own money, It was a great sing-along track and one that's still enjoyed today.

The theme to my first true love at the age of 19, something very special that lasted 4 years, and nothing will ever come close to that again. Ever.

The start of house music. I was DJ'ing all over the place when this came out - Hawthornes in Nelson, Angels in Burnley, the Manxman at Preston. It transformed dance music and still an absolute banger.

The saddest moment of my life. My mother was taken ill whilst on holiday in Guernsey. She had a stroke and was fatally ill.  My brother, son and I rushed to Manchester airport and got on the first flight to Guernsey. We arrived late in the night to find the most vibrant, charismatic, funny, genuine person motionless in a hospital bed. She was still with us in spirit but her brain was not. In a moment of mother and son I held her hand and whispered, "I love you mum." Her eyes were closed and there was just the sound of her breathing.... she whispered, "I love you, Lee," and gently squeezed my hand. It was the last thing she said to me, and although she remained alive for 4 more days, I had to get back to work as I was in the middle of a crucial time. I flew home the following day and so the words and video of this song will haunt me forever because I needed her to say something and I wasn't there when she died, I was on a plane home... giving up on her.