I haven't written about my running for a while because, well, there's been nothing much to talk about.  The "mixing of households" and the "rule of 6" has provided confusing guidelines for running in groups but I've been getting out on some socially distanced trail runs on Sunday mornings. Normally drop a couple of pictures on my Insta-brag, but this one was one that I really felt more people should know about. 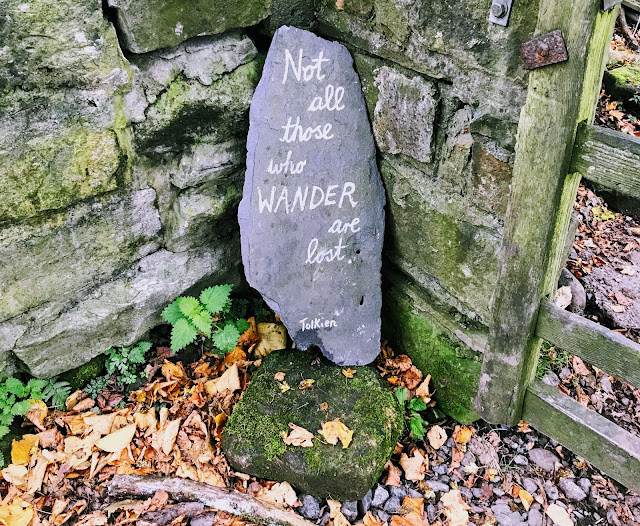 The Tolkien Trail 10k is a race that I looked at last year but it clashed with another event.  The route takes in the Pendle countryside and leans heavily on the fact that JRR Tolkien regularly stayed in a guest house in the grounds belonging to Stonyhurst College during the time he was writing Lord Of The Rings.  So when looking up a route for this week I found the "true Tolkien Trail" map with a full set of directions and sights to look out for with additional information. Map downloaded, weather check done, meeting point arranged... Sunday morning sorted!

It's worth noting here that the information leaflet shows the route to be around 5.5 miles but it's actually 7 miles however, the route directions and additional information were absolutely spot on.

The views across Pendle and the Ribble Valley are astounding (and would look even better on a sunny day) but, for me, it was the local points of interest that kept me going on this route, as it's the longest run I've done this year!

We saw Stonyhurst College and the Observatory.  We crossed tiny bridges over streams and rivers.  We ran past two points where rivers merge but, for me, the best part was seeing Cromwell's Bridge. According to local legend, this packhorse bridge across the River Hodder was used by Oliver Cromwell during his march from Skipton to intercept the Royalists at the Battle of Preston in 1684.  Today, I also crossed that bridge... then I came back again because there's no way through on the other side.

The route isn't an easy one - and it was ever so muddy today but that's all part of the fun - but it really is worth doing.  You can see the route on Strava and I've also uploaded a few extra pictures on my Instagram.