October 16, 2013
In a land of myth and a time of magic the destiny of a great kingdom
rests on the shoulders of a young man.
His name is Merlin.

Merlin is one of the most popular British TV dramas in recent years.  Since its launch in September 2008 the BBC drama has grown to become one of the most loved and watched programmes on television.

The Merlin: The Complete Collection (series 1-5) box-set is being released on
28th October 2013! 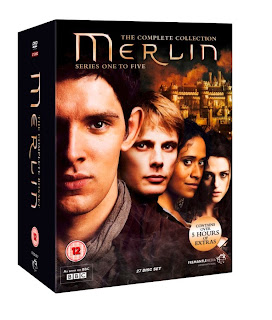 This complete collection brings together all five series on DVD as we follow Merlin attempting to fulfil his destiny at the side of the once and future king.  Merlin features an all-star cast including Anthony Head, Richard Wilson and the voice of John Hurt (as the Dragon).  This 27-disc box set tells the epic story of the golden age of Camelot and features amazing action sequences and stunning CGI.  It contains every episode and bonus features and includes the "Making Of..." documentaries, out-takes, cast and crew commentaries and deleted scenes.  Merlin: The Complete Collection box set will retail at £59.49 when released.