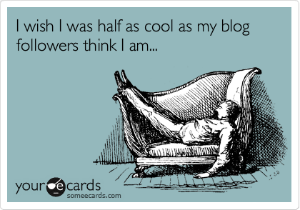 I've been in this blogging game for a while now - thirteen long and eventful years if you're interested - and this blog has taken on a number of guises. I've blogged since the days when no-one else was blogging, or it was a dirty secret, or people just didn't understand why you'd want to share your thoughts and musings on this new place called The Internet because it was full of geeks and weirdos. I feel as though this blog has grown and matured with me (stop laughing at the back) and there are parts of it that have branched off appropriately because they took on a life of themselves.

But the growth of The Internet as an entity is one that hasn't surprised me. Initially, I didn't understand why more people weren't taking advantage of this wondrous thing. However, with easier accessibility, there were more and more people embracing the fact that being online was going to become part of their lives. In fact, there's a whole generation out there that have never known a time before The Internet.

Kathryn, who is one of my earliest blogging friends (so early, I can't even *remember how we initially connected), published this post today which stopped me in my tracks. She reminisces over the times when our community was full of 'awards' and 'memes' (prompts that would help you find your writing confidence - I really enjoyed them at the time) and there was a lot of support for bloggers and writers. I've also seen Kathryn lament that her blogging and social media activity don't give her the same fuzz of happiness that it used to.  She doesn't get as many comments on her blog and she sees a lot of uncomfortable conversations on (for example) Twitter. Her journey with her blog has left her unsettled and confused as to where it's taking her. I think there's more to it than just that but you'll have to read her blog post, and my comment, to see where I'm going with that.

To some extent I totally agree with Kathryn and there are times when I look back over the growth of my blog(s) and wonder if I should have, or even could have, kept things more concise and less commercial but I embraced the change as I saw it and went with the flow. It has brought me countless opportunities and connections and I hope that I (eventually) found a balance that resonated with my readers too. A cacophony of my internal voices, you might say? The blogging community is most definitely not the same as it was five years ago, but then neither am I. The Internet has grown beyond my wildest expectations and there have been ways in which online activity has had to be monitored by people/groups/companies who, rightly or wrongly, consider themselves an authority. And this is where changes have happened.  New people have joined The Internet, new friendship groups have formed, new tools and skills have been developed just in the way that they did ten years ago.  You can either embrace that or you can carry on doing the thing that works for you but people may move in a different direction. I also believe I'm lucky in the fact that I haven't experience too much negativity online. Don't get me wrong, I see it - anonymous keyboard warriors are the worst kind of online evil. People with preconceived ideas are also almost as bad and that's where the name for this blog originally came from. 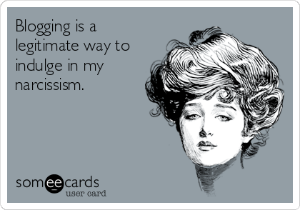 I don't get the same volume of comments on my blog posts these days and I sometimes wonder why, in exactly the same way that Kathryn does. Speaking to my blogging peers and comparing notes I don't believe that I'd be anywhere near the 'top of the charts' like I used to be, I don't get as many people linking to my blog posts as I used to, I very often feel very out-of-the-loop when I see blogging friendship groups arrange to meet up at event and there's all sorts of technical talk that interests me but doesn't feel important all the time.  Maybe it's because I'm comfortable in the way in which my blog has already grown - and continues to do so.  I look at the community I have built and I'm proud of it. There's a stalwart few that connect with me (and vice versa) on a regular basis and there's very much a feeling that you have to put out to get back (*f'nar*) and I have been very slack on that score recently too.  There was a story about a blogger from the USA this week who comments on over 500 blog posts per week.  Yes, that face you're making now... mine was the same. But she is a 'full time blogger' (a lot of paid work on her own blog and for other websites) and I'm sure her own blog is a hive of activity.  There's also the fact that a lot of people now use the internet on mobile devices. This brings a new wave of interaction processes because (a) people read on the move and don't comment or (b) they can't comment because of commenting/device incompatibility issues or (c) they use social media to share/comment/converse about what they have just read. It's a fresh way to interact but it doesn't necessarily suit the way in which us old-school bloggers work because were are/were used to on-blog engagement.

There is no call-to-action here. This isn't a plea for comments or for you to share this post. It's just a general musing about how times change but sometimes we can become so embedded into what works for us and settled into our comfort zones that changes happen and we don't see where that began. The edges are blurred. We look round and our Twitter feeds are full of promotional-style "READ THIS NOW" updates, Facebook isn't showing us our friend's news, there are even more social networks to try and keep up with and you feel a little over-whelmed with it all. It's a good exercise to stop and think about where you've been and where you are going.

For what it's worth, I don't often do these type of navel-gazing blog posts. I used to do a lot of them and I enjoy writing them. They used to eliminate about 50% of my readership because they were non-bloggers and didn't want to read about the way in which bloggers think and act. They just wanted to engage with content and then go about their day. I think that more of my readers will understand this train of thought now.

TL;DR Blogging has changed but you don't necessarily have to.

*I think it might have been through a writing forum called Judith's Room which led to a blogging community and that is where I met a lot off 'the original crew', most of whom I'm still in touch with and a couple of whom became my closest confidantes.