Seven Things That Are Wrong With The World Today 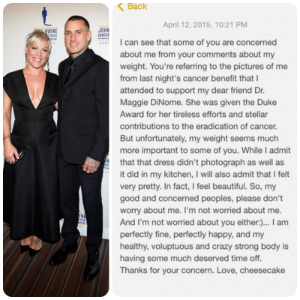 Things That Are Wrong With The World #1 : Bodyshaming.  And even moreso, bodyshaming the singer, Pink!. I'd fucking LOVE a body (and hair) like hers - and I'm sure my husband would too!  Is there a perfect body size and shape? If so, can someone please tell me what it is and then I can sort myself out and make sure I'm harming anyone's eyesight as I walk down the street. Anyway... if anyone could give a lesson in shutting down the body-shamers, it's Pink. (original Facebook picture | original tweet)

Things That Are Wrong With The World #2 : Death threats after a made-up news story that lead to people having to take time away from Twitter. ESPECIALLY when it's over fucking Top Gear. Speculation last Friday saw Sue Perkins as "one of the favourites" to take over the main presenting role on a programme that probably isn't even going to continue in it's original guise - this has since lead to Twitter Trolls wishing her dead for some strange reason!! I didn't see Chris Evans receiving death threats and having to take time away from Twitter when his name was originally bandied around. (because he's a man?)

Things That Are Wrong With The World #3 : Blogger networks being paid to promote brands and/or services but requesting that bloggers do it for free (there's a whole other rant just bubbling under the surface here - sorry to non-blogging readers. You can just skip this one and move on to the next one).  Yet another 'opportunity' lands in my inbox which tells me that I can APPLY to blog about a company and, if selected, I can conduct a full review, talk about it on my blog and MAYBE win a voucher for a determinable amount of money whilst the network receives a substantial amount of money for 'sharing' and the brand gets lots of lovely unique internet coverage for free. *head:desk*

Things That Are Wrong With The World #4 : Spring has not yet sprung properly. I hear gardens being mowed for the first time this year, the sun is peeking out occasionally and I feel the tickle of hayfever in my sinuses and eyes but there seems to be no blossom on the trees yet and very few daffodils lining the roads. It's almost the middle of April and I've not had chance to take my tights off yet!

Things That Are Wrong With The World #5 : Encouraging ballot spoiling.  OK, so British politics isn't in its best place at the moment but times can change and this is your opportunity to do that. A spoiled vote doesn't decrease the votes of the party you don't want to be in power for the next five years. In fact, it does the exact opposite because it takes away a vote from another party, possibly giving a majority.  Yours might only be one vote but it's one vote that matters. Take some time out to read manifestos and policies and make a decision formed on your own opinion and not those opinions you see in tweets, media reports or overhear on the bus going to work.

Things That Are Wrong With The World #6 : People who favourite tweets for no apparent reason. If you agree with it or find it humorous, BLOODY RETWEET IT and share my wit or wisdom.

[Edit - for clarification - in my world, a 'favourite' is not a 'like'. If you like it, share it. If you're bookmarking it for future reference then that's cool by me.]

Things That Are Wrong With The World #7 : Waxwork figures of YouTube zelebrities. YES, REALLY!  I'm all for us having clean-living beautiful people as (almost) relatable role models but let's just remember that they are promoting a daily (or not in most cases) snap-shot of their lives which is unachievable for 99.9% of the fans, doesn't portray a 'normal' way of life (i.e. working hard for your money) and shows that you can lie about your achievements (writing a book?) and young, impressionable people are OK with that. *sigh sigh sigh*

What's wrong in your world at the moment? What would you add to this list?  Feel free to rant in the comments and add to mine.