March 08, 2016
I was recently reminded of one of my old blog posts - my oldest YouTube favourites - and considering YouTube itself is only just over 10 years old, I'm always grateful that people have clung on to film/television/music clips and uploaded them for us to enjoy.  Also, as YouTube has developed, it has become a platform for anyone and everyone to be a broadcaster, or a film maker, or a musician, or... absolutely anything on camera.  Content is uploaded to YouTube at an alarming rate - 300 hours worth of content PER MINUTE, according to this great article which means the good, the bad and the downright awful is out there waiting for someone to enjoy.

I'm always on the lookout for new channels to subscribe to so I thought I'd start an occasional series that recommends different types of YouTube content for you to enjoy. I've selected one video from each channel to showcase as an example but these are channels that I really look forward to seeing appear in my subscription list over and over again. I've also tried not to be too obvious with my choices. 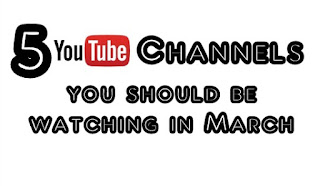 If you're not already watching Casey Neistat then what the fuck are you doing with your precious online time? I've been watching Casey's videos for almost a year - probably since just after he started daily vlogging and just before he made the announcement about his social media platform, Beme (which STILL isn't available for Android. gggrrrrr) although I had seen a couple of his viral mini-films without realising they were made by him.  I don't #fangirl over a lot of people however Casey is just so engaging and innovative and does a lot of 'behind the scenes' stuff which just makes him more engaging and innovative.  Get watching NOW!

Or rather... no music in this instance. I saw a #withoutmusic tweet scroll past in my Twitter timeline early last year but it was only last month that I found out that I'd caught House of Halo's very first creation.  I've chosen the opening to the TV show, Friends, to highlight their work but have a look at all their videos as they are genuinely genius!!

I caught a few of Jazza John's videos a while back, subscribed to the Rhyming With Oranges channel but didn't delve in as much as I should. Just by chance, I clicked on this one and everything he said resonated with how I currently feel about a lot of YouTube content. He is a huge advocate of LGBT issues but also talks about politics and technology and I'm looking forward to his upcoming series from his travels to India.

I went through a whole period of watching 'What's In My Bag' videos and this one from palest blue appeared in my recommended videos. I spotted a Filofax in the bag (I'm very observant...), looked at the other videos on the channel and loved the 'show and tell' planner set up and flip-through videos.

Because science... and pain... and slow motion. Watch The Slow Mo Guys with or without the kids and enjoy. They even take requests!!

Recommend me some really great YouTube content to subscribe to. You know the type - stuff that you really, really can't wait until the next upload. It can be a daily vlogger, a comedian, a singer, something educational, a beauty blogger... absolutely anything - the more random, the better!.

Did you enjoy this? I've got a whole subscription list of weird and wonderful stuff.  I could recommend channels every couple of months if you want?  Let me know!