Soundtrack To My Life - My Top 5 Duran Duran Tracks 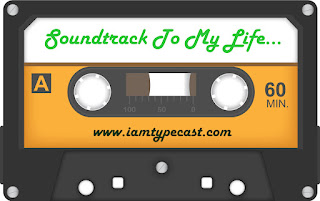 Hello Soundtrack To My Life... it's been a while, hasn't it? Anyway... before you proceed, please bear in mind that this is (a) not a definitive list - every girl has a right to change her mind and (b) I started with a list of twelve tracks and had to whittle it down, so the second I hit the 'publish' button, I'll probably want to put point 'a' into action.

But it all stems from this article I read the other day which made me realise that even the most loyal of fans have different 'favourite' tracks, and they aren't necessarily the most popular or the ones that made it to the top of the charts.

I'm not going to give a potted history of Duran Duran because, if you are reading this you are probaby a bit of a fan yourself, however many of their songs are fairly timeless and it's interesting to see that, even though they have been together (in various formats) for almost 40 years, they are still performing live and releasing albums today, with very little variation in their style. So, as promised before all the waffle here are my top 5 Duran Duran tracks.

Their debut single from 1981 and, even though I was only 9 years old at the time, I can absolutely remember the first time I heard this. It quickly became a style of music that I felt really comfortable with (electro coupled with decent bass and a clever drum rhythm) and within a couple of years, my bedroom walls were adorned with posters of the band, torn carefully from pop magazines.

This is on the 1982 album, Rio, but I never owned a copy so the first time I encountered this song was from the album, Arena, recorded on their 'Sing Blue Silver' tour.  I don't know what it is about this song, but the atmosphere it creates inside my head when I listen to it just makes me totally relax. Also, if you listen to the studio version right to the end, there's a subtle jangle of keys just after the fade.

The video to this song always reminds me of the film Girl, Interrupted and this song is the only release from the album, Red Carpet Massacre. When compiling this list, I realised that I'd chosen mainly slow songs (see the note at the end for the omission of the more obvious tracks) - I'm not sure if that's because they invoke memories of how I felt when listening to this band as a teenager or whether it's a reflection of the way I appreciate music now.

Interestingly, this song only peaked at #52 in the British music charts, even though some big and current names were included in the production of this track but I think that was down to confusion about the future of the band (Andy Taylor had left and the whole album had been rewritten and rerecorded) and also maybe because it was the time we were moving through the transition from physical sales to downloads; a really weird time for a traditional 'pop' band to move into a new way of making music available to listeners.

Seven And The Ragged Tiger was the first Duran Duran album I properly owned (i.e. a physical copy, not a bootleg or borrowed copy) and every time I hear NMOM I feel that it's one of those types of songs that I can completely lose myself in and dance to on my own with not a care in the world.

I could have probably counted the number of cover versions (that I know of) that Duran Duran have done on two fingers, then I discovered that they did a whole album of them in the mid-1990's - but it feels like no-one really wants to mention it... apart from the track, White Lines.  The style of this cover and the production of the video are far removed from what I was used to but, for some reason, it works. And I love it.

Are you surprised that The Reflex or Wild Boys isn't mentioned?  Me too... but they always feel like the tunes that would be the go-to track for an 'Ultimate 80s' playlist and I didn't want this to be like that. I also had to remove Save A Prayer and Reach Up For The Sunrise from the list because I'd limited myself to just five.  SEE... I'M DOING IT ALREADY... AARRGGHH.

What would you have included?

Congratulations if you got this far. Soundtrack To My Life is an occasional series on this blog where I talk about music that's influenced my life or I invite people to talk about the same. Read/Listen to all the previous Soundtrack To My Life entries here or follow the dedicated Pinterest board. Find out more about participating by >>> clicking here <<<