Things I Learnt In August

Alrighty then... only two days late this month. There's been a great number of eyebrow raising discoveries in August so here they are all for you too because I'm good like that.

My son didn't believe he was actually called Jake. For a full 17 years he has thought that he was called 'Jacob' and we were using a shortened form of that name when talking to him. He demanded to see his birth certificate to determine the truth.

I've been pronoucing the brand name "Maped Helix" incorrectly since primary school. Because of a phone call I had to make for work purposes, I found out, from the source, that it is pronounced 'Map-Ed He-Licks' and not 'mapped hell icks'.  After a short survey with my Facebook friends, it transpires that I'm not the only one who thought the same.

You can use emoji even when on a desktop or laptop computer.  Ok... so this isn't actually ground-breaking but it helps to add emotion to a tweet that could possibly be misconstrued. So, a hat-tip to Buffer with this step-by-step tutorial but it's simply part of the on-screen keyboard that you can access really easily. I now have mine pinned to my toolbar so just be thankful that I haven't been adding 💚💚💚 to all my blog posts...

I need to stop reading those 'things that happened x years ago' (even though I've written a couple myself - one here on this blog - 25 Things From 25 Years Ago and one for Buzzfeed - 30 Things That Happened 30 Years Ago) but facts and figures like Wikipedia was launched in the same year as the iPod (2001 - just 15 years ago) always fascinate me. Read more here. 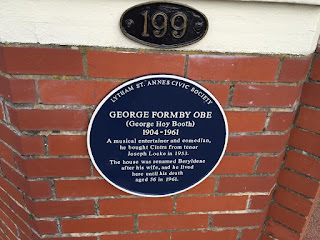 My friend's Nan used to live in George Formby's house.  It's well documented that George Formby lived on the main road between Fairhaven Lake and St Annes in Lancashire so when I saw my old school friend, Steph, share this photo of the blue plaque that hangs on the gatepost and then mention that she spent a lot of time in there as a young girl, I thought that sounded dodgy until she explained the house ownership details.  Fascinating claim to fame though!

You thought I'd forgotten about my usual running update, didn't you.  Never fear... (but it's short this month)

During an interval training session I had a bit of a realisation.  At my (now) fastest sprint, Mo Farah is faster than me at his average 5k and 10k pace.  Plus, in any 10 second countdown when changing speed (for anything : interval training, couch to 5k sessions, etc) Usain Bolt has more or less completed his 100m race.

As an aside, here's a (very) short story I wrote about a race that I won when I actually was a champion sprinter, many moons ago

I have two entries for 'Video Of The Month' for you

The first video is 80s related. As mentioned in the description of this video and written specifcally to make me feel old, Lionel Ritchie's song Dancing On The Ceiling was 30 years old in August so this compilation of dance scenes in movies has been set to that song. Doesn't it just make you want to go back and re-watch all of those films?  Did they miss out any of your favourites?

The second video is "Hugo Takes A Selfie" which feels very much like entering a time machine. It's a genius little project and goes to show that the next generation are very much growing up embedded into the digital world.  It was even featured and shared by YouTube themselves!

I think that's it for another month. Well done if you got this far. If you learnt anything or experienced anything unusual in the month of August then let me know in the comments!