Fitbitches - The January Run Down

I struggled so much in 2016 to find my headspace when running after coming back from a three month break due to injury and a diagnosis of arthritis in my knees. In March I rejoined our local community Couch to 5k programme, revisited my volunteer role as Group Leader for a few months and then took the personal decision to spend the winter running for me to try and find my sweet spot again in our Progression group (5-10k).  I ended up with a couple of personal best times - just shaving a few seconds off here and there - and started to fall back in love with running again.

For 2017 I have three goals and they are not 'time' related.  I need to take that particular pressure off myself but I'm sure that if I stay injury free, the better times will come in the long run (no pun intended but you can have that as a bonus).  So my goals are manageable and achievable and which, I hope, will keep me motivated month after month. They are:

A Medal A Month

Official races can be expensive and I only really enter local ones. I have no desire to run anything further than 10k - my half marathon dream is over - so finding appropriate races that are close by and that aren't going to break the bank can be difficult. Toward the end of last year I stumbled across the Virtual Runner community which provides real medals for challenges that can be completed within an allotted time on your own doorstep or even a treadmill. All you have to do is enter and pay for your chosen challenge, capture your run data (easy peasy when you have running watches or fitness apps), submit your evidence before the cut-off date and, a few days later, a nice shiny medal appears through your letterbox! 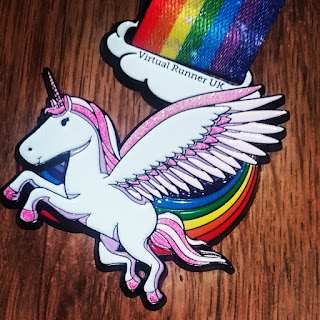 So for January, I chose an easy-to-achieve virtual race of running 10k within the month of January but my own mini-challenge was to do it in the first week of January.  This was for the Unicorn medal and it's beautiful - very girlie and a bit of fun.  I easily did the 10k in two parts with my running group but it got me hooked!! So I've now got a virtual race/challenge booked for March and I had already registered for the 1000k in 2017 (more on that in a minute).

Then I remembered I had registered for the East Lancs Hospice 10k. I marshalled this last year, it was freezing cold and in the middle of nowhere! I'm still not sure what compelled me to sign up for it but I'm sure it was something to do with the euphoria of those aforementioned personal best times...

Anyway, this one was today (Sunday 15th January) and it was, once again, freezing cold and raining (but not extreme weather like we've been having) and the course was muddy and 'undulating' (sidenote: in the running world the word 'undulating' usually means 'fucking great big hills').  I laced up my trainers and prepared for the worst. 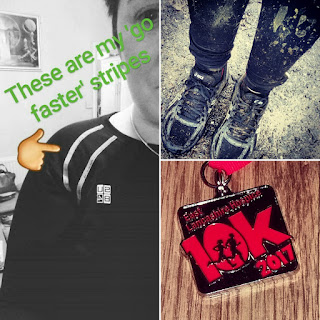 It was definitely as bad as I thought it was going to be but after the first couple of miles, instead of mincing around the puddles and slipping on the mud, I decided to go headlong through most of them. The hill was a tough nut to crack and it formed part of the loop back, so you had to run up the hill, round the park then down the hill but the best thing about it was all the support shown for everyone and by everyone on that section of the run. The front runners coming down were shouting encouragement to those of us going up and those of us going up were calling out the same to those on their way down.  It was also the place where I saw friends who were not running the race, half way up that hill, giving out cheerleading chants, hugs, jelly babies and taking photos.  It was the exact point I needed to see them and really spurred me on.

I ran all of the race with a friend from my running group. She's much faster than me and had only registered for the race last week but stuck with me through it all, providing that 'push' when I needed it, chatting about mundane things like work and our past (when we could catch our breath).  She's now sick of hearing me thank her for doing that but after my lonely run at Lytham, it was a game-changer for the whole event for me.


As an aside - a huge thanks to all the organisers of the East Lancs Hospice 10k - it's lovely to support a local charity - plus all the marshals today were smiley and enthusiastic which means an awful lot when you're soaked to the skin, can see that you're not really near the end yet and feel a bit rubbish. Also, because I've marshalled that course, I know it's a long and cold day for those standing around. You may think it's hard to be happy and encouraging but when you see the effort the runners are putting in you just want to give them a yell and a cheer and it gives you a positive experience in a totally different way.

So what am I going to do with all these medals? Why push myself to do something each month when I can just go out and run with my crew three times a week?

Well, one of the other virtual challenges I have registered for is to run 1000 kilometres before the end of the year.  A simple task for many endurance athletes or those marathon training but this focus means that I have to stick to an average of 20k per week and use additional races to soak up the gaps.  The 'medal a month' plan will help me focus on this goal and I know I will want to push myself slightly to ensure that I'm generating enough distance each week.  Again, it's not about times or training for a half-marathon, but about giving myself a goal which feels attainable over this period of time.  Fingers crossed that I don't come a cropper and end up with a twatish injury that will stop me in my tracks (ho, ho, another pun for you there - I'm on a roll now).

To Create A Small But Meaningful Online Running Community

I've said it before, and I'll say it again, and again, and again. The running community we have here in Blackburn is unique. It's run solely by volunteers, it's altruistic, it has many arms, there are countless opportunities which lie within and beyond and it brings together people whose paths would never normally cross in real life. I've never seen anything like it before and I'm so proud to be a part of it as one of their volunteers.  I've seen the way that the people within the community (and beyond) support each other - that proved itself today - and I've seen people achieve goals they thought were way beyond their reach just a few short months ago.  A lot of this support takes place within Facebook groups as well as out on the roads.

I want to take some of that positivity that I've been experiencing for the past two-and-a-half years and share it with some friends that find following Couch to 5K on their own difficult, or struggle to get motivated to power-walk for half an hour a day, or feel as though there's no-one cheering them on when they come back from a run to a house of chaos. So Fitbitches has been re-born.

Fitbitches started out as a podcast a while back but, once again, time constraints put it on the back burner for a bit (you can hear some old podcasts on YouTube).  I'd like to restart the podcast again. I'd like to support a charity. I'd like to organise my own virtual race and let my friends-inside-the-computer feel the elation of achieving a goal and having some bling to show for it. The plan is half-written and I have the support of two brilliant people who are my sounding board. It will be a while before it becomes what I want it to become but, in the meantime, you'll see me hashtagging every running update and photo with #Fitbitches and there are people benefiting from the idea in a small (but perfectly formed) Facebook group.  If you want in, just let me know, but I'm accepting active members only - people who can really invest in providing support and encouragement to each other, regardless of the differing goals and fitness levels. As soon as it starts growing bigger, you'll definitely be hearing about it anyway!

I'm going to publish a Fitbitches-style blog post like this every month to help me re-cap the previous few weeks and to focus on the upcoming month.  Yes, the January one is early but there will be nothing much else to write about as I'll just be running my usual three times a week for the rest of the month.  In February, I've entered the punishing Winter Warmer 10k organised by Blackburn Road Runners which includes my nemesis, Buncer Lane (read more about that hill here) so I'll be working towards that for my February medal.

And now I'm off for a well-earned lie down and maybe a glass of wine!  By the way... did you spot the third free running pun? Have another look at the title.  I'm done now... promise...