Things I Learnt In January

Last year I promised myself that the best way to maintain sharing stuff-I-found-on-the-internet-that-was-too-important-to-be-passed-by-on-social-media-but-not-long-enough-for-a-blog-post was to keep up this series of "Things I Learnt In..."

I don't want to put out content that feels forced or boring and some months you think that you don't have enough material to create a meaningful article or you get to the second week of the next month and think, "Oh, shit. I didn't do my monthly series shizzle".  So, what I learnt in 2016 is that if I miss a month, then it's no biggie.  Here is a mixture of what t'internet and life taught me in November, December and January.

When you blog for yourself, writing for magazines is harder than it looks. I was asked to write the lead editorial for one of our annual industry publications at work.  Following on from that I have been given the opportunity to write another lead editorial for a brand new magazine and have landed the gig of writing a bi-monthly column for the first magazine and a quarterly column in the other. I know it's something that will stretch my writing limits but it's a challenge that I'm looking forward to. Note to self : request a byline... 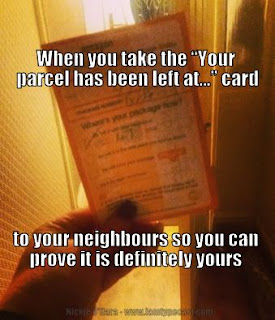 I'm definitely not the only person who takes their "Your parcel has been left at..." card with me to the neighbour's house.  In fact, all my friends do the same, usually marching over with it outstretched in their hand.

You can count up to 59048 using just the 10 digits on your hands. I knew that if you used a binary system you could get up to 1023 but the Indy100 highlighted a few methods which gave you ways in which to count higher and higher using a base three positional system. One to show the kids, I think.

Conversations with my grandchildren are always unpredictable. For example, just before Christmas we were talking about television shows. Here's how our chat panned out:

Me: Amie, who do you like on XFactor?
Amie (8 years old): Sam. She's got a great voice. I wish I could sing like that.
Me: Megan, do you watch XFactor?
Megan (6 years old): No
Me: Do you watch Strictly Come Dancing?
Megan: No
Me: Well, what do you watch then?
Megan (looking at me, witheringly): Peppa Pig, of course, Nana. I'm six! What else do you think I'm allowed to watch?

If I had a diary left over from 1989 I could reuse it this year. I was listening to "Homework Questions" on Simon Mayo's Drivetime show on BBC Radio 2 and someone had found a 2016 diary that they hadn't used and wanted to know when they could use it again, date for date, day for day, especially as 2016 had been a leap year. So when I got home I did some investigating and came across this nifty little website which tells you which year you could use your old diary from or when you could reuse a forgotten one.

New ideas for my bullet journal never go amiss.  If you are a regular reader you'll know that I'm a huge fan of the bullet journal system. I am always looking for ways to update my notebooks and make them more streamlined and keep a simple system effective.  I've found a new way to index my notebook using an A-Z plus page numbering method. I was also going to utilise this method of brainstorming the new year. There is a PDF for you to print out but it would be just as nice to write it out in your planner. [P.S. Bullet Journal Fan Page | Bullet Journal Fan Group - both on Facebook]

Richard Branson handwrites all his notes. I'm sure I've read about this somewhere before but I could have written his blog post for him. Everything he says about the physical act of writing out your thoughts and ideas helping you to digest the information is true. Maybe he needs to bring out his own line of notebooks. I'm free to help you with that thought process, Richard... Richard? No?

I've started a(nother) monthly series called Fitbitches and you can read the January instalment here. What my main aims with this are to collate my thoughts about running each month, to focus on my monthly and annual goals and to not end up with my head up my arse when it comes to the actual act of running. I also want to create an online community but... baby steps...

I have been trying to stop the pins and needles in my foot when I run.  I have read many online articles to try and find the solution to my problem. There are so many theories which include thick socks, trainers that are too small/tight or laces that are fastened incorrectly however I found a little piece from Runners World which mentions ensuring that calf muscles should be stretched before a run. This would explain the fact that I've been feeling a bit of tightness and aching in my calves recently when on longer runs so there's very possibly a correlation between the two. Or maybe I need to treat myself to a new pair of trainers...?

This Facebook conversation starter on The Fat Girls Guide To Running page ended up as a marketing exercise and 'research' (which was a bit disappointing) however, some of the comments from other slow runners are worth reading. As someone who has moved from the front of the pack (group leader) to the back of the pack (back runner, slowest in the group), I've battled with personal negativity - but definitely not from anyone in our community. A mile is a mile whether you run it in 8 minutes or 18 minutes or however long it takes you.


THE MINI REVIEW AND RECOMMENDATION SECTION

I've received a couple of gadgets to review this month from EC Technology. I'll always give these guys a mention as their products are extremely useful and reasonably priced. The Bluetooth 4.0 Portable Speaker makes a great gift for that hard-to-buy person or you could throw it in your suitcase so you can pair it with your phone or mp3 player for holiday tunes. For your phone, you could try this Wireless Charging Pad which charges your device without cables - it's also a very portable unit so can be taken with you in a work bag or handbag (NB: check compatibility first).

I've also been taking time out from my new-found love of thriller stories and reading a bit of chick-lit. I was recommended The Lost and Found Life of Rosy Bennett by Jan Birley which is about a newly widowed woman finds out her husband and a secret life before his death so she is forced to leave London with her reluctant sons and set up a new life in the countryside. A great read on my Kindle! [Jan Birley : website | twitter | facebook]

THE EXTENDED VIDEO OF THE MONTH SECTION

I've been subscribed to Nadia Sawalha & Kaye Adams' YouTube channel for a while but hadn't been clicking on any of the videos because they were taking part in Vlogmas (vlogging every day in December) however, in between Christmas and New Year I saw that one of their new video's view count was climbing higher and higher. It was a raw cut of an conversation, led by Kaye, detailing Nadia's husband's battle with alcoholism and depression. It was an open and interesting, from the heart, truthful conversation. Moving into 2017, Nadia is daily vlogging but creating content that includes her husband asking him how he is coping with his demons on a daily basis (full playlist here). There are two facets to this - firstly, the actual content which is interesting to hear from a first-person perspective rather than an 'expert' but also it makes me wonder if him over-talking the situation makes him examine himself and the battle too much? Either way, as a wife to someone in a similar situation, I'm finding it compelling viewing.

If I lived in London I'd have to undertake every single one of Geoff's Tube Challenges.  His latest Tube Map Challenge looks the most interesting yet.  Do I know anyone that's prepared to give it a go?

I want this vase. Do I know anyone with a lathe, please and thank you? I can supply the pencils.

And to finish on a weird note (badum-tish) you can have this version of 'All Star' by Smashmouth where all the notes have been re-tuned to C. It's like a weird Friday night karaoke version that I love and hate in equal measures. What the fuck is wrong with me?

Don't forget to let me know what you've learnt in the past few weeks. Amaze me with your new found knowledge...