The May Run Down

This Fitbitches Run Down might be a bit of a 'woe is me' type of post as I've been having a(nother) personal battle with my running. It's really hard to explain but I've felt very panicked every time I've started to run, I've struggled to find a good pace and I've had to really slow my pace (not that I'm fast anyway!!). I think it started with an ankle injury a few weeks back. I tripped over the back step (it's long story and it involved a full bowl of hot water too - think: £250's worth of You've Been Framed clip if anyone had have been filming) and ended up hobbling around for a few days. I took the sensible decision to rest for a week and then gingerly tried to run again. I have no idea what was going on up there *taps forehead* but I felt like I couldn't run again; or at least, not for any distance. There was even a couple of occasions with the full tears and snot and almost needing a brown paper bag for my breathing. My running buddies were fabulous, but the more attention it was given, the worse the panicking got.

So I quit. I took myself out of the situation that was causing the upset and thought it best to go it alone.

Now this won't be any great deal to your average runner. Running is traditionally a very selfish sport. You push your own body beyond it's current limits and expectations to get better and better, to reach those personal best moments. But this is exactly why I found running hard in the first place - and exactly why I felt I got so much out of our community running programme. There is always someone there to talk you through the rough times and to celebrate the good times and every other moment in between.

Our local parkrun at Witton Country Park is a toughy. I actively avoid it and choose to run at the more flat Burnley parkrun whenever I have a free weekend and I'm not volunteering with the GroupRun plans. But this week was different. I needed to do something totally different and take myself out of the comfort zone I'd become accustomed to. 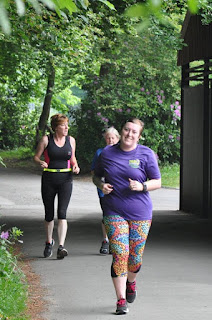 It's my slowest ever 5k - slower even than the first time I ever timed myself 3 years ago (you can see the Strava details here). But Witton parkrun is a 2-loop course, very much on uneven terrain and there are some steep hills up in the woods with some equally steep downhills too. It's one that you have to work to control and one that is very difficult to maintain an average pace. My main goal was to complete the course and I did it. I received lots of fantastic encouragement and it was great to see some regular local runners there plus to run the last part of the final lap with Katie who used to work in our local Labour offices when Jack Straw was our MP.

I also now know that the Witton parkrun course is manageable but one that certainly puts you through your paces. It's not one that I could run every week but I'll definitely be back to try and improve on my time another weekend.

With regards to finding my running mojo again, I've decided to take myself back to our 'couch to 5k' GroupRun programme again and put myself right back into the middle of where it all clicked for me in the first place. I've no idea if it will work and I don't actually want to stop running... I just want to enjoy it again.