The April Run Down

Do you like the new logo? Isn't it just bloody awesome? I'm in the process of properly branding the #FitbitchesMOVEment and my friend, Amy, designed this for me (she comes highly recommended and reasonably priced - let me know if you want her details). I wanted to showcase a "powerful and active woman" not specifically engaged in any one fitness activity but also not emulating the 'We Can Do It' symbol of feminism. I think this is spot on. I've already teased it a bit here and there but watch out for it here, on Facebook and on Instagram.

Being Active Every Day In April

At the end of last month I made a promise to myself to be active every day in April. I thought I could run every day or do some form of additional exercise; as it was, I took it upon myself to do the 30-day squat challenge (lead by an app on my phone) which started innocently with 30 squats and finished on a thigh-aching 195 squats.

As I moved through the month, I found myself with a better stance and a deeper squat. Even though it felt tough, I completed the challenge to the end of the month. It's changed nothing physically (that I can see) but it has got me into the habit of doing something extra every day to help towards my overall well-being and fitness which can only be a good thing. To continue with this daily exercise, I'm going through the challenge again and adding in a planking challenge too. At the time of writing, I'm up to date with my squats but after a comedy (!) fall over the back step at home I was nursing an ankle injury (nothing too serious) so the planking is on hold! Normal service to be resumed next month, hopefully!

Couch To Marathon In Two Years 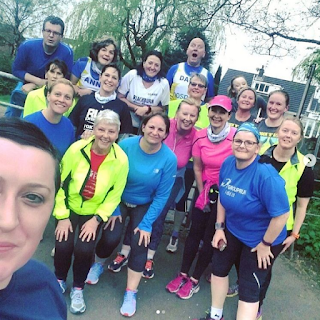 I talk a lot about the 'original Group 6 gang' - the people that became my close friends in our community running group. Over time we went our separate ways to achieve personal running goals but we all remained close friends. Many of the gang have gone on to run half marathons - a massive achievement in itself - but five of them have (now) actually run a marathon; one completed the Manchester Marathon in March and four others ran the London Marathon in April. I got the opportunity to run with most of them as a bit of a "look how far you've come" mini celebration - just a 4 mile leg-stretcher as part of their taper to the marathon and it was wonderful to catch up with them all and hear about their recent achievements and expectations.

I wrote an article for runr.com which tells my own story of how community running changed my life. It shares my journey over the past three years and has probably helped me examine where I'm at right now with my running, especially as I'm having some doubts at the moment (read more about that here).

Videos of the Month

The first video is from John who is one of the Vlog Brothers. In this short video he explains how he's received encouragement in the form of a simple 'thumbs up' from other runners, and he's now returning the support to other runners.

The next video looks at how someone benefited from using a personal trainer for 30 days. I have always wanted to have a personal trainer so should really put some effort into actually joining a gym and/or getting up earlier to train. Anyway, I loved this video because it shows how small changes can bring big results in a short space of time.

Eliud Kipchoge is a name many of us will recognise from watching the London Marathon and long distance running events in the Olympics and World Championships but he's recently been part of a training programme (#breaking2) to run a sub-2 hour marathon. You can read more about it here and here and the video below is the final 3k in the official attempt.

Because it's marathon season, there has been many running and training article that I've enjoyed so I'll share some of those link here now. Please do let me know if you've read anything that might interest me too.

I've been struggling with my breathing recently (and it's also affected in the summer by my hayfever) so these breathing tips for beginner runners were a great way for me get back into the zone again plus it also fits in with the run/walk/run/walk method used by couch to 5k programmes.

I have a bit of a girl-crush on Kelly Roberts and I've been following her year-long journey which hoped to see her qualify for the Boston Marathon.  She was relying on her finishing time from the London Marathon for entry and this blog post and video is her explaining her disappointment of not achieving that much desired qualifying time and thinking about what she is going to do next.

I've talked often about how running has changed my life so reading about the psychology of running and the ten ways in which running can change your mind and brain has helped me focus recently.

Buzzfeed recently crowdsourced an article from 11 women who shared what motivates them to work out which includes feeling strong, a sense of accomplishment, breaking barriers and being part of a team.

And finally, I'm sure we've all been out running or exercising and had people say dumb things to us. Here, Women's Running and put together the 12 most 'popular' things that people say to runners.  Let me know what 'words of wisdom' you've had yelled at your as you've run past someone.