May 01, 2017
Back in March my Facebook Messenger pinged at around 8.30am and the conversation went something exactly like this:

Laura: Ok, really bloody random question but if you had the chance to spend a few nights in Helsinki with me and go to an influencer (cringe) event where Casey Neistat was speaking would you be up for it?

Me: Holy fuck, Laura! You know how to wake a girl up!
Me: In an ideal world I'd jump at the chance but [..] it's not something I can do
Me: I'm flogging myself with a big stick right now

Laura: I understand. I saw Casey's name and thought I had to ask because otherwise you would hate me forever

Me: Do me one favour - just give him a piece of paper with "I ❤ @nickieohara" on it and get him to sign it. I'm sure he'll be FINE with that. Or a video message. No pressure.

So, I then imagined that Laura blocked me on all social media channels, just in case I sent even weirder random requests and never really thought of it again.

For those that don't know, I'm a huge fan of Casey Neistat.  He doesn't need me to shout loud about his YouTube channel for him to grow his audience as he's quite capable of that himself, having gone from zero to hero in around two short years. It's really hard to explain why he is so engaging and inspirational but, as a film-maker who daily(ish) vlogs, he doesn't see vlogging as a shortcut to engaging with an audience. It's still part of his storytelling. Everything he does has a purpose but he has a talent for making it feel natural and making him seem normal and approachable and... well... like one of us.  I've championed him on this blog a few times and really have to restrain myself from sharing everything he does for fear of looking like a bit of a stalker.

Anyway...  please do go and have a dip into his videos. He has a 'style' that makes watching really easy but I guess that's the storyteller in him.

Fast forward to 28th April 2017.  If this was a Casey vlog, this is the bit where I'd reach out to the camera, adjust the lens and zoom in a bit to make you understand that what I'm going to say next is important.

Laura posted in a private Facebook group that she was sat in the audience of the #PingHelsinki conference and did we want her to livestream the Casey Neistat talk. I was at work with NO speakers and no real way of watching but went with a "HELL, YES", knowing that I could watch later. I tried to sneak a peek whilst it was live but I was supposed to be working and her internet speed was a bit funky.

And then it was all over... or so I thought.

I got another Facebook notification from Laura to the tune of "Nickie... you owe me" and wondered what the hell it could be. It was this... 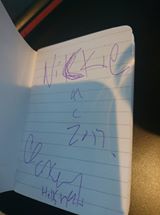 Yes, Laura, I owe you BIG time. You have no idea how much I appreciate you giving up your Casey moment to pander to my needs. I'd have been like "fuck Nickie, the needy bitch... 'so, Casey...' " and then a full on interview in the 30 seconds I'd been allowed to be near him.

Thank you, Casey, for giving up your valuable time to sign a piece of paper and send a video message to someone who you have never met and who has a quite frankly, unhealthy fangirl crush on you at the age of 45.

PS. Laura is the Director of BlogOn Conference. Click on the link to find out more.