Things I Learnt In April

April felt like such a long month but I think some of that was because I was counting the days on a 30-day squat challenge (more of that in the monthly Fitbitches blog post). But long months provide lots of learning opportunities so here are my favourite few.  Buckle in... it's a long ride!

My picture of Carol's bin and my declaration that she is my hero is one of my most popular photos of the month. #BinGate is the hot topic of the month... probably even the year. I thought our plight was a common one but it seems that it isn't. It's a long story, but on many occasion our wheely bin is stolen. It is deliberately taken and used for a full fortnight until the next collection day for one of two reasons; (1) a neighbour doesn't own their own bin, will not pay the council fee of £20 for a new one, so takes the one nearest to their gate on collection day or (2) they didn't put their own bin out in time for collection and emptying so just take one when they think no-one is looking.  Yes, I'm being serious. Friends wait in anticipation for my weekly Tuesday updates on the drama in our alley way. I could write a whole blog post about this - maybe even a book or a sitcom.

Do you know what will happen across the media when the Queen dies? There was a great longform from The Guardian which details the code - London Bridge is down - and the order in which announcements will take place.  I'm a bit of a Royalist at heart - I think we have a wonderful monarchy but this reign has seen the most changes within the media and has battled to uphold tradition alongside the need to be seen to be changing.  It can't have been easy and, regardless of how much comfort and assistance the Queen and the DofE have from day to day, there aren't many 90-odd year olds that are working and look quite as sprightly.

Edit: On the day this was published, the DofE announced his retirement.
It must have been something I said...

If music has run out of tunes, then the internet has definitely run out of articles. I've always had this crazy idea that there are a finite number of tunes out there and that, because of the way we are inspired by the music we listen to when we are growing up, this will influence the composers of the music of today - even to the tune of plagiarism. Anyway, back in February I wrote a blog post about songs that sound like other songs, incorporating my theory and an interesting marketing strategy that uses music to influence purchases.  At the time I mused that I would have liked more time to investigate the theory or to be paid to research these sorts of idea.

@Popjustice interesting piece about pop running out of tunes - I wrote about this exact subject a few weeks ago (on an amateur level obvs)
— N I C K I E (@nickieohara) April 13, 2017

Fast forward to April and I read an article on, written by Peter Robinson of PopJustice, examining this exact subject after Ed Sheeran was found guilty of plagiarising a Matt Cardle song with a few other Ed Sheeran examples and lots and lots of comparisons.  Copying? It's doubtful. Something that is becoming more noticeable due to the way in which we are fed the music across the airwaves? Definitely!  Even Boy George has his opinion on it all.

It's never OK to presume you can talk about someone's mental health regardless of their celebrity status or, if you're a Daily Mail reader, the size of their salary.  Stormzy - a British grime and hip hop artist - was featured on the front page of NME as part of their "Time To Talk" campaign. Whilst NME are to be applauded for starting this conversation in the mainstream, you need to read what Stormzy had to say about this. His depression is something he has chosen to share through well-chosen media outlets and he didn't give permission to be used as the 'poster boy' for NME.  The magazine has now issued an apology and a brush-off explanation but it definitely doesn't excuse their assumptions and their actions could have made a personal situation a whole lot worse.  Every action has a consequence, even when you are trying to send a positive message.

Other people mention me in their blog posts, the mental bastards. Firstly, Violet Fenn who writes Sex, Death, Rock 'n' Roll  reckons I'm awesome and batshit crazy but this makes me a succssful writer. I can live with that, natch.  Also, Talya at Motherhood : The Real Deal crowdsourced an A-Z of the things we should teach our daughters; I contributed to "S"  *innocent face*  Finally, a website of which I'm a h.u.g.e. fan of - Londonist - have been using some of my images in their London in 1990 series, highlighted in their weekly newsletter.  The images were probably initially sourced from Pinterest (pictures from my 18th birthday trip to London) but they are embedded in the article and fully credited which, for me, is fantastic! Please do give all of the articles a read and a share on your social media.

Whilst everyone else is binging on Netflix, I'm binging on podcasts. It's taken me a while to get into podcasts. I've steered clear of them for a while but I tune into weekly radio shows on 'catch up' which is more or less the same thing.  I'm a sucker for a good story though and anything to do with real life or crime - and when mashed together it's even better! I really got into Serial when it was first launched but the hype wore off and my podcast app lay empty. S-Town reignited the fire and it was because all episodes were available for download in one go. I didn't have to wait six days for the next installment. I saved them all to my phone and listened to them, one after another, during the car journey to and from work. My current binge is the Karen and Ellen Letters which include after-show analysis and then I'm moving on to Mortified which was recommended to me this week.  If you'd like me to curate a list of recommended listening please do let me know but Sian has pulled together a comprehensive list of the best 'true crime' podcasts to start you off.

And speaking of podcasts... this gets a bit meta.  Richard Daly mentioned a blog post a wrote last year on one of his podcasts.  It was my 'random things you hear on the radio' observations detailing the structure for almost all local commercial radio stations.  Listen in here.

Twitter doesn't have the most followers on Twitter. Katy Perry does (at the time of writing).  You can view the top 100 here... however, I'm not sure I could cope with having millions and millions of followers. I get into enough trouble with the 6,000 I currently have.


There's a reason that celebrities wear shoes that are too big for them. Aside from the fact that your feet may get sweaty and slide down towards the toe of the shoe (because... gravity), it's to prevent blisters when wearing the shoes for any length of time. Silicone pads (the shoe equivalent to tit-tape) are usually inserted to help with the fit and comfort too.

There are some brilliant picture projects out there in internet land but to track down as many of your subjects as you can over 30 years later to recreate original photos shows dedication. It's also an interesting insight as to how people change... or not.

My video of the month comes from Facebook. It's of an illegal rave that took place on a tube train and it's genius!  The weirdest thing about this is that I shared it to a friend's Facebook page at exactly the same time she shared it to mine. Great minds, eh?


As a related aside, I also found out that Carl Cox played the Millennium (the switch from 1999 to 2000) on New Year's Eve twice. He did this by performing in Sydney, Australia then flew back over the International Date Line to play in Hawaii. (h/t to Reddit for this one)

That one viral social media post that will give you 15 minutes of internet fame is just not worth it. Do you remember that image of all the celebrities that died in 2016, created in the style of the Sergeant Pepper album cover? Chris Barker, the guy who created the image, dug into the buzz around it from his Twitter analytics and from the 270,000+ people it was served to (i.e. his tweet appearing in their timelines through sharing, likes, comments, etc) he only received 15 new follows. I think this goes to show that actually growing social media accounts is even more difficult now that it is embedded into our lives. Are we waiting for the information to be served rather than going to look for it?

The ending for the second series of Peter Kay's Car Share was very disappointing. Don't get me wrong, the series was brilliant but if the rumours are true, there are to be no more episodes made - not even a Christmas special. I'm a huge believer in not stringing things out and every story has a natural ending however all references to the "Christmas team in the supermarket" indicated that there would be an glimpse of the season's festivities at least. WE NEED A ONE-OFF CHRISTMAS SPECIAL!

Everyone loves a ghost sign. I'm fascinated by ghost-signs; the history and how they have lasted over the years. I wrote about a few in our town a while back but wanted to share the pictures to a wider audience. So the ghostsigns_ Instagram account was created and it's naturally migrated into a fan-generated account. I'm getting submissions from all over the world with exact location and local history information which helps enormously with the story behind each picture too.  Give it a follow and embed yourself in some history. 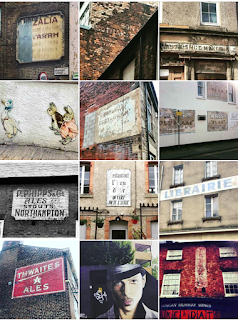 And finally... an announcement. I am now officially the National Stationery Week Blogger of the Year. The official press release and more information will follow in a separate blog post but there's a trophy winging its way to me and hopefully a few brilliant opportunities later this year. 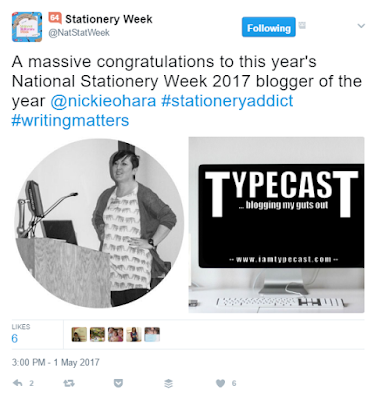 Coming up on the blog soon... the reveal of the #FitbitchesMOVEment new logo and all the information about how you can get involved plus more about that Stationery Blogger of the Year award! Also, don't forget to read my two-part Bullet Journal series (part 1 | part 2) and all about how Casey Neistat sent me a personal video message - total fangirl moment!