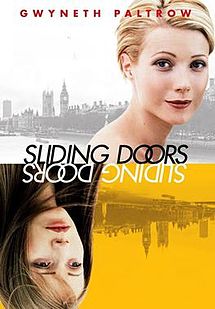 I was in the car on the way home from work on Thursday night and I heard a mention of the film Sliding Doors. It's one of those films that I keep meaning to watch but have just never got round to... for 19 years, apparently. So I made a note in my head to download it this weekend and watch it.  Fast forward to Friday night, (by which time I had totally forgotten about my mini-plan - well, I'd slept since then), a bit of channel hopping after the Britain's Got Talent semi-final results show and - LO AND BEHOLD - guess what was on BBC 1 just after 11pm?  Yep, you've guessed it!

I'm naturally an oversharer (what blogger isn't?) so I announced my plan to watch to my Facebook possé, most of whom were a bit taken aback by the fact that I've never seen it. The general premise was that it was a fantastic film, "despite Paltrow".  So here are six of my musings after watching Sliding Doors.

1.  What the fuck is that accent that Paltrow is using?

If a British accent is key to the role then use a British actress. I don't remember Gwynnie being the golden girl of the 90s so why couldn't another, similarly talented, actress have been employed? I notice that John Hannah and John Lynch used their own accents (Scottish and Irish, respectively) and we had no problem in understand them, at all! For what it's worth, I have the same issue with Renée Zellweger being used as Bridget Jones.

2.  For the love of God, find an acting style and stick to it!

Paltrow's style of acting in this felt like a mixture of Hugh Grant in Four Weddings and a Funeral and Meg Ryan during her Sleepless in Seattle/You've Got Mail era; ditzy and bumbling in places.  I'm not sure it fully suited the persona that was being portrayed - and it was only in places, not consistent.

3.  There should have been more 'sliding door' opportunities

Yes, I'm aware that the film needs to be succinct however there were so many more opportunities to see other outcomes from other fated events.  If it hasn't been done already, someone needs to write this book with a theme of Choose Your Own Adventure : "What would you do? Turn to page x for scenario 1 and page y for scenario 2".

4.  I am now yearning for more 90s films that have an actual beginning, a middle and an end.

I'm a sucker for a good RomCom and there were plenty of great ones produced back in the 1990s. It's probably because they are from an era when I had less time to concentrate (tired baby brain) on in-depth storylines or when I was a young romantic myself.

5. Maybe your life is mapped out for you and you just don't know it yet.

I read that after making this film John Hannah decided not to run for trains any more simply because if he was meant to get that train then it would have happened; if he didn't, then another one would be along soon. I'm not big on 'fate' or 'karma' but I do like to question our life path and what puts us on the journey we are taking. Do you have to take one big risk, make a big (monetary?) investment or have one life-changing moment to alter that path? 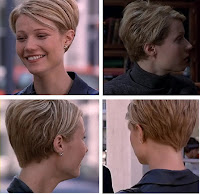 There is a specific hairstyle that I yearn for and I've never got it quite right. Now that I've seen this film, I realise that it's Paltrow's "new you" hair style that I want/need - or at least it's a starting point.

Conclusion : I think I'm going to have to invest some more time in watching films I never got round to watching 20-ish years ago especially if the official soundtrack is as brilliant as the one used for this film (I found it on Spotify so you don't have to - you're welcome). Stay tuned for next Friday's installment!