Soundtrack To My Life : Songs You Should Never Play On Hospital Radio 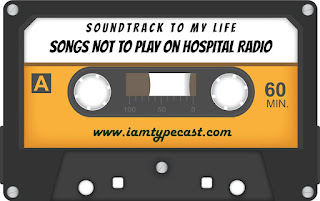 I get into the most random of conversations when it comes to music but a good friend of mine - Rowena, aka DJ Row - is going to be volunteering at our local hospital radio station in the very near future.  It's something I've thought about investigating after my time at Preston FM but fitting it into my already hectic schedule would be a bit of a nightmare!

So, for the sixth instalment of Soundtrack To My Life this year I thought it would be a great idea to help Rowena out and compile a list of songs that she should absolutely not play during her time as a DJ on hospital radio.

She should definitely not be piping You're So Vain into the cosmetic surgery clinic and I think Push It and Torn could be off the playlist on the maternity ward.

Maybe The First Cut Is The Deepest should be shunned for the operating theatre however post-op recovery ward residents may enjoy swaying to the dulcet tones of Everybody Hurts and Comfortably Numb depending on the level of their morphine intake.

I think the asthmatics might have something to say if they heard Take My Breath Away and to be avoided during chest clinic opening hours is It Only Hurts When I'm Breathing,

Out on the mental health unit we're trying to sidestep Suicide Is Painless (the theme to MASH) and Just Like A Pill plus we're giving Rehab a firm swerve. I think Bad Medicine might be out too...

The geriatrics ward have asked for Knocking On Heaven's Door to be left in the rack but we might just get away with playing Stayin' Alive if only for assisting the resuscitation team in their hour of need.

On the intensive care ward, it's probably best to avoid Girlfriend In A Coma even though this had been double-billed with Don't Fear The Reaper.

One that she can absolutely play though is Man, I Feel Like A Woman on the gender reassignment ward.  I'd like to think that's often requested.

Here are all the songs, collated into a handy playlist on YouTube for you.

Enjoy... unless you're in hospital, of course!! 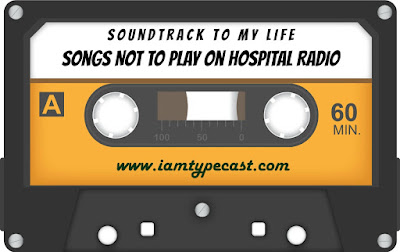 I'm really hoping that you, as my reader, are not offended by this light-hearted Soundtrack To My Life this month. It's just another way to bring music to you as part of the occasional series on this blog where I talk about songs that have influenced my life. Read/Listen to all the previous Soundtrack To My Life entries here or follow the dedicated Pinterest board.