The March Run Down

April 06, 2018
I write about running on a regular basis. I talk about it on Facebook A LOT and I even have a podcast which is all about running. I have gone through every emotion you can think of before, during and after a run but I still find it hard to believe that I now actually run distance for pleasure and fitness rather than to win races as I used to when I was a sprinter in my teens. And whilst I have some blog posts specifically dedicated to certain points in my running journey, I also like to do an occasional round-up style piece dedicated to general musings and running or fitness links I find on my travels around the interwebs. So here is one of those... this is The March Run Down!


First and foremost... just in case you didn't know... I ran a half marathon. There's a whole long story behind it but the premise is that I was pissed off after being snowed in on the day of the 10 mile race that I'd be training for so, on a whim, I booked one of the final 19 places in the Darwen Heritage Half Marathon (official promo video above) - probably the toughest in the local area. You can read all about it here.

Leading on from this, a huge boost for me at the end of March was being named as Runner of the Month by members our running club. All club members are invited to email their nominations in and then these are shared publicly at the end of each month. I was totally overwhelmed reading what people had to say about my recent improvements and gave me a bit of a kick up the arse with regards to just Getting On With It. Oh, and I got a trophy to add to my collection of bling! 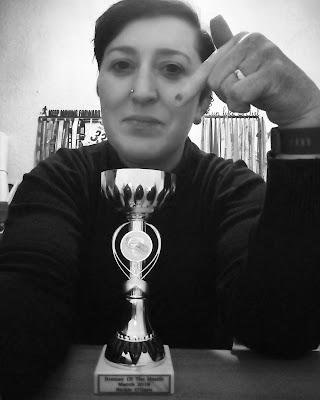 Next, I want to address something that I see talked about on a number of occasions; runners who are all shapes and sizes and different paces. There are a whole load of reasons that I'm passionate about this but mainly because I've been lots of shapes and sizes and because I've seen people progress from our local 'couch to 5k' group running plan to achieve amazing things.

Because here's the thing: There are no pace requirements for toeing a start line—or crossing a finish line. You are not too slow to chug water from a tiny paper cup and press on. Or to stop your RunKeeper or Strava or Garmin or whatever tracking toy you prefer and look at your effort and say, "I'm proud of what I did today."

This extract is from an open letter to any runner who thinks she's too slow, written by Kara Cutruzzula.  I struggled for a long time with my pace and feeling that I wasn't good enough to be a runner even though I was volunteering and mentoring people to run up to, and beyond, 10k.  But changing my own focus and joining a running club made a massive difference. I always tell my newbie runners to take each run as it comes and every step is an achievement - this article helped me to take my own advice.

People often said they were surprised I could run so well for being "bigger." Or they'd note that I was "strong," a notoriously condescending word in running culture.

After getting my own head around my pace, I started to think about my weight and I'm now working on controlling that too.  I've not been talking about it too much as I'm doing it for personal reasons but I have noticed that my running is improving now that my weight is coming down.  I'll never have the same physique that I did when I was a sprinter - I mean, I'm 30 years older and have had three children - but it would be nice to shed a fair few pounds, tone up and generally be healthier.  This second quote is from an article by Allie Kieffer where she says that her weight has nothing to do with how good a runner she is and she talks about the criticism she received from peers and coaches which lead to what could be considered a possible eating disorder and some directly related injuries.

Off the track, I didn’t feel "big." Actually, I felt beautiful. I filled out the curves in a dress and cups in a bra. I knew, intellectually, that to people outside of the running community I was on the smaller side—and that in all other areas of life I benefited from the privileges that society bestows upon people who fit into straight-size clothing. But on the track, I felt different—uncomfortable and inadequate.

And this is the important take-away from the article.  A runner's body is completely different to a non-runner's body and it's all about how see ourselves.  We need to see the strong, confident person we are when we are smashing those miles and celebrate our achievements. In fact, Mirna says it best in this video that I found on Facebook...


Phew... something a bit more lighthearted now.  Do you parkrun? I love joining in when I can and we have a few great local courses. I've recently knocked 10 minutes off my course record at Hyndburn (my favourite course round here) but I only ever treat it as a personal challenge.  If I ever do a bit of parkrun tourism, I like to know how 'lumpy' it's going to be in advance so this parkrun Elevation website is a huge help. Just type in the name of the parkrun you're looking for and the elevation (according to data from GPS devices operating with barometric altimeters) is laid out for you.

And finally... the main Marathon season is creeping up on us.  I have many runner friends across the country participating in various marathons this year - some for charity, some for personal achievement - all way more committed to the cause than I am.  Putting the extra hours in to train for a 10 miler and a half marathon alongside my volunteering commitments almost broke me so I can't even begin to understand how time is allocated to train for a marathon - it completely takes over your life!  But if you ever wondered what it was like to run the London Marathon then spend the next five minutes watching this video which take you round the course from start to finish.


Please do let me know what your running achievements have been recently. I'd love to hear about them!