Soundtrack To My Life : Spotify Shuffle! 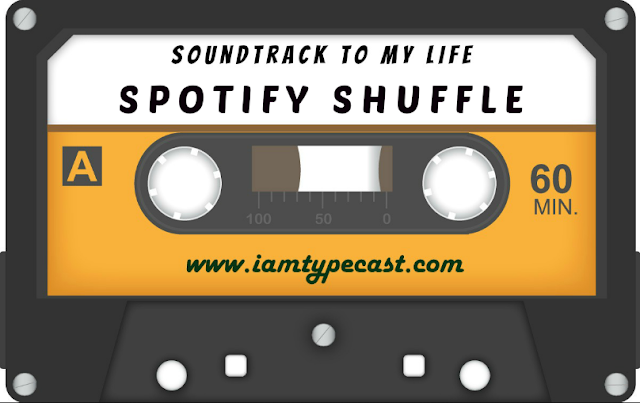 I'm seriously loving seeing a few of the old school blogging 'tags' doing the rounds again so I jumped on the opportunity to join in a music one as it really fits in with my irregular Soundtrack To My Life series. This prompt comes from Samantha who blogs at Hampshire Mama and it reminded me of a couple of posts that I'd done WAA-AAA-AAAY back in the day (see here and here) where you put your music library on "shuffle" and see what comes up. I'm pretty mainstream "pop" with my music choices So here is my 2018 version, via my Spotify account...

FYI, I have a playlist on Spotify which is linked to my Shazam account - it's my favourite playlist because it's so random, so I'm using that today.

A good song to start - and it has a pretty decent video to go with it.  And I can't be the only person who wishes they looked like Anastacia in that little red outfit, surely?  When I was a teenager I was obsessed with copying dances in videos and, I have to admit, that I've tried to copy a few moves from this video in my time (well, back in the early 2000s when I was younger and could move better).

The first time I heard this song I thought it was one I'd missed from the 80s so I fell in love with it straight away.  Random fact though that gives it a connection to that era - the singer is the daughter of the actress who played Sergeant June Ackland in The Bill!!

Ahhhh Freddie... the most amazing Freddie Mercury.  The album, Mr Bad Guy was Freddie's solo venture whilst Queen were on a recording hiatus and my aunt owned the vinyl which I played over and over every time I babysat my cousins.  I can still remember every word to every song, and I sing at the top of my voice when any track comes on.

I probably don't need to do any explaining about Fleetwood Mac, especially not the Rumours album.  But my discover of them went in reverse really.  Dad was a huge fan but I only really "understood" the music when the song "Everywhere" came out.  This sent me delving into Dad's record collection to find gems such as this!

I started out LOVING this song - it was this year's "Shape Of You" which seemed to be played everywhere but it always felt fresh... well, that was until the commercial radio stations started playing it three or four times during office hours. It doesn't matter which radio station we have on at work (we tend to have music stations rather than talky-talky stations), it feels like every other song is this one. It hasn't quite forced me to delete it from my Spotify playlist but I'm on the verge...

I'm glad this one came up because it's the one song that makes me remember happy office times from an old job and a great work buddy.  We both loved the film "White Chicks" and this song is used twice in that film with great comedic effect.

There's a whole blog post about my 18th birthday trip to London where I first heard and saw this band at the Hippodrome. It's probably because of that connection that this song has stayed with me over the years but it's not bad, really, if you like that sort of thing...


I first discovered this song via a clickbait article on Facebook (and mentioned it in a blog post about body image) but the lyrics resonated with me immediately - the video is very cleverly done too.  Have a listen...

Michael Hutchence just oozed sex and I was fascinated, firstly, by his relationship with Kylie and, secondly, his relationship with Paula Yates. And I'll never forget when I heard that he'd died (it was on the car radio when I was taking my kids to their swimming lesson) because I think it was the first "famous person" - bar Diana - that I remember being genuinely shocked about.  But the music was, and still is, as sexy as he was.


I just LOVE this song; I can listen to it on repeat. Even without the lyrics, the sound has such a guttural feel to it. I think this song just brushes the surface of Amy's talent and it's such a pity that she decided to fuck about with her own mortality.

I think that Mel C has the most amazing voice, proven when she took on the role of Mary Magdalene in Jesus Christ Superstar a few years ago. I've loved all of her song releases from her solo career and the first time I heard this on the radio a couple of years back, even without hearing the introduction, I knew it was Mel C singing.

One of my all time favourite 80s tracks. I know the song addresses key issues surounding homosexuality and homophobia but it's got that synth-pop vibe that I fell in love with in my teens.

Genesis... another of my dad's music influences for which I am grateful. I mean, I discovered them around the Invisible Touch era and didn't go back too much over their back catalogue.  I did, however, love me a bit of Phil Collins as time went on.

Who doesn't love a bit of Dolly? But this was a random song on my Spotify that came on in the car one day when I was driving the grandchildren to the park.  They cottoned on to the chorus really quickly and we sang it together, with all the windows wound down, starting softly, rising to an almighty crescendo which I'm sure sounded wonderful to all the people we drove past! It's now a staple song for the car.

As mentioned previously, I love a good pop tune and one that has a dance to go with it is a bonus! Yes, at the grand old age of 46 I still try to copy dances from music videos and often get caught in the kitchen by my husband or my grown up sons!! I love this 'come back' track from Steps for both of those reasons *does all the Steps arm movements*


So there you have it. Probably the oddest collection of pop music you'll ever find.  If you want to listen to any of this Spotify Playlist you can subscribe to it here.  I was surprised that there was no Duran Duran, Madonna or 5 Star in there but then I realised that I have dedicated playlists to those artists *embarrassed face*

If you would like to join in with this music tag there here's how!

Give a nod to the person who nominated you and link to their blog.
Open your music library and put it on "shuffle"
Talk about the first 15 songs that appear in the playlist
Tag more people to join in

Here's who will be joining in next - please do go and visit their blog!