Soundtrack To My Life : Songs You Should Never Play At A Funeral

November 03, 2018
For new(er) readers, or those not in the know, Soundtrack To My Life is an irregular music series that appears on my blog from time to time.  Over the years, I've had guest posts from people who documented songs that transport them back to a specific moment in their life and I've generated playlists for a variety of reasons (click here to scroll through the 100+ entries). 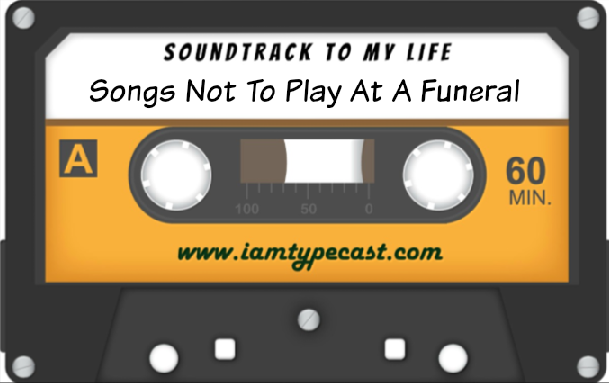 Your loved one has just passed away and the family are gathered around paying their last respects.  The last song you want to hear is Another One Bites The Dust softly playing in the background on the kitchen radio.

It's now time to decide whether you want a burial or a cremation. I've always wanted to be buried but my husband has always expressed a preference for cremation and it's important to discuss these things.  Maybe listening to  Ashes to Ashes and Going Underground on repeat will help you make up your mind?


I've always enjoyed the scene in Beetlejuice that makes you believe the choice for your afterlife destiny is determined by taking your number and waiting in line for your judgement.  Maybe the decision can be influenced by playing Knocking on Heaven's Door and Highway to Hell on a loop?


And now it's time for the mourning period to start properly.  Everybody needs a bit of time to come to terms with their loss and that amount of time is different for everybody.  It is probably best to try and avoid songs like Somebody That I Used To Know and Since U Been Gone for a good few weeks, at least!


But everybody is different.  The reprise in your mourning period might be helped by listening to Live And Let Die.


But then again, it might be 'good riddance' and that person is Better Off Dead!!