Manchester Half Marathon : The Official Run Down 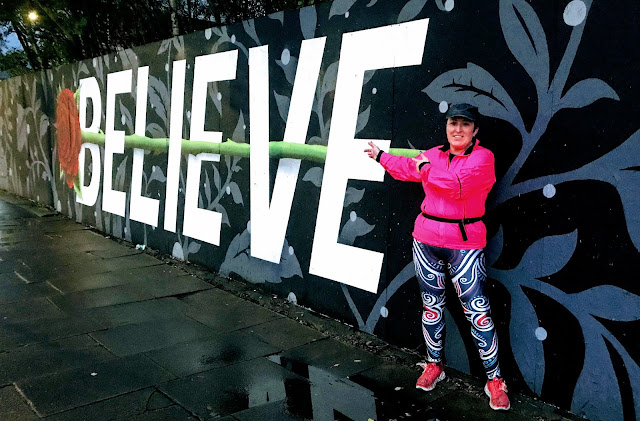 It's been a while since I blogged about running but if you follow me on any of my social media accounts, you'll know that I've been training for a half marathon for the past three months.  I've struggled through the training due to a flare up of osteoarthritis in my knees and basically just sworn my way round every run since deciding to undertake this challenge.

A bit of background... my running club - Blackburn Road Runners - had picked a local charity, #FightLikeAKid, to support for a full year. #FightLikeAKid was set up initially to fund treatment for a young boy in Blackburn. Now the charity has grown and is supporting many more families whilst their child is receiving treatment for childhood cancer. It's a charity that I can really get on board with because my own daughter was diagnosed with Neuroblastoma in 1992 (you can read our story here). We remain eternally grateful that she was cured of cancer so now it's about raising funds for other children with the same disease.

Activities were organised throughout the year to raise money and awareness and this culminated in a group of our runners being offered a place in the Manchester Half Marathon with an agreement to raise a minimum of £100 each. In the end, there were 31 runners and I was one of them. 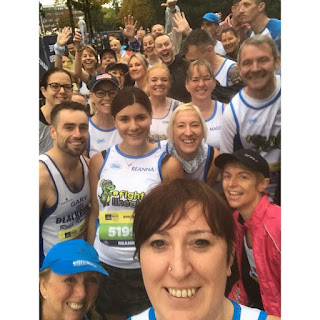 It was a difficult choice to make because I know how much effort it takes for me to run this distance having done two half marathons last year [Darwen and Southport] but with an ongoing medical issue, it was going to be doubly difficult. However, I stubbornly dug in and battled against it.  My running gang whispered encouragement through every training session and let me swear and moan more than usual - but it was great training through the summer months with road and trail routes mixed in with the longer runs and (a new method for me) crossroad runs for the extra miles. 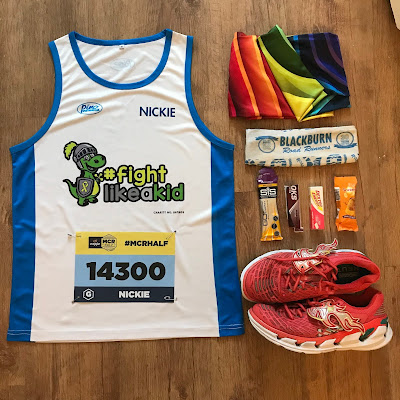 Sunday arrived far too quickly.  I was so nervous about this race but by the time I got to the start line I just wanted to set off! I managed a pretty even pace for the first 8 miles, running all the way, but then my knee went and I had to slow down a bit and run/walk for the rest of the race. But it didn't matter... I still got a 'personal best' of over 9 minutes.

💛 We were in starting pens according to pace. I loved that each ‘wave’ got their own official countdown and start.  The course was chip-timed so everyone got an accurate time from when they crossed the mat. We did have to stand around in the rain for around 40 minutes until our wave set off so I had taken an old fleece jacket to wear to the start line and then discarded it as we set off - all the jackets are collected and given to the homeless or to charities. 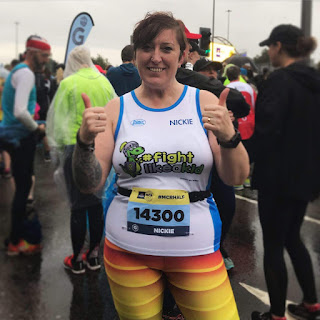 👌🏻 The support around the course was phenomenal! The people, the brass bands, the choirs, the jelly babies and jaffa cakes, the brilliant signs, the water/recovery stations - everything! I was told that a city race has a different atmosphere to a locally organised one and it's very true.  Whole families were outside their houses cheering us on and there was even one girl in a dressing gown who had nipped out to have a look at the race, got locked out of her flat and was waiting for her boyfriend to come round with a spare key!
🌈 I loved all the shout-outs about my leggings - that really spurred me on.  After a bit of too-ing and fro-ing about what to wear, I definitely made the right choice with my gear (apart from a little bingo wing chafing on my right arm but we won't talk about that).
🤷🏻‍♀️ I'm disappointed that there was no finishers t-shirt or goodie bag and that it was such a long walk from the finish line to the 'Event Village' for water and toilets so I've already filled in the feedback survey.  I understand that previous year's runners had asked for better and more environmentally friendly water/recovery stations and facilities but part of the experience is receiving your goodies at the end.  My entry fee was covered by the charity but it isn't a cheap half marathon to enter (£42).  As you can see, our team had specially printed racing vests which is a fantastic memento for me but having a t-shirt to use as part of your future training gear is part of the memory and to have some public bragging rights... plus additional free marketing for the race. Maybe look at finding a t-shirt supplier who makes garments from recycled plastic to offset the thousands of half-full, discarded bottles I saw on route?!
🏃🏻‍♀️ The 11th mile was my 500th mile of the year.  I'm still on track for 1000km for a second year running (all the puns intended there - #sorrynotsorry)
🏅 I would love to do this course again - maybe even next year. Who's with me? 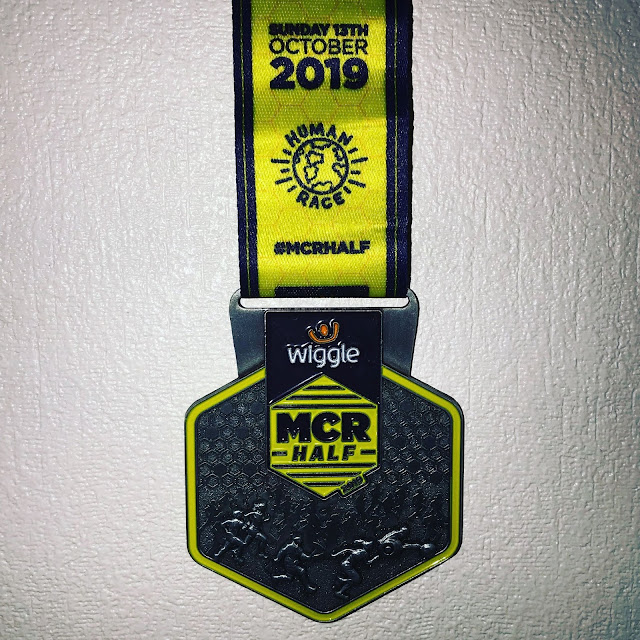 I have been so proud to be part of this team. Our club has the best community aspect already but there has always been someone there to give you a boost when a training run hasn't gone to plan, to give you ideas to help with your fundraising and to generally keep each other's confidence at its highest level. On the actual day of the race, personal best times were smashed left, right and centre and team members selflessly gave up their own race to help others that needed support. As a team, we've raised over £5000 so far, with monies still coming in!

Thank you to everyone who has sponsored me for the charity #FightLikeAKid. The pot is still open for another week or so if you'd like to add something to it.
https://uk.virginmoneygiving.com/Nickie-FightLikeAKid