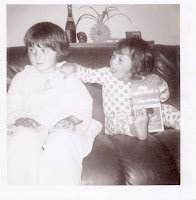 First of all, one of my earliest childhood memories where I first experienced "sisterly love" was when my sister was admitted into hospital with severe gastroenteritis in 1977.  She was two years old and I would have been five years old.  I can remember my parents being frantic with worry, my grandparents looking after me for a few days and that I wasn't allowed to see my sister as she was on an isolation ward.  I have a vivid memory of going to visit but only being allowed to stand outside on the gravel path and wave at her through a window.  I can remember being totally distraught about her not being at home and wondering if I was ever going to be able to give her a hug again.  Upon her return home a week later, she sung only one song and was word perfect because it had been played constantly on the hospital radio (see below).  I remember wishing her back into the hospital quite soon after because she was getting on my nerves!! 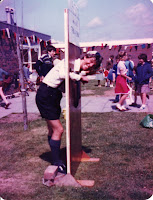 My next memory is of a man who was the most fabulous teacher you could possibly have.  He taught me in Junior 2 and Junior 4 (now known as Yr 4 and Yr 6) and his name was Mr Halstead but everyone knew him as "Sir".  He was firm but fair and he had an amazing vision for music and drama and, as you can see from this picture, didn't mind mucking in at the school fete.  When we were in our last year at primary school he applied for special permission from the Bishop and wrote a Nativity and Passion Play to be performed in our local church.  We rehearsed for weeks and it was perfect.  No word, just actions - all accompanied by the musical score from Jesus of Nazareth  with the "Jesus" speech on the cross mouthed to the exact words from the film (here from 1m30s).  One of the songs that he taught us was "Windmills" by Alan Bell.

He enjoyed (bloody hell, I'm talking about him like he's dead - he's not!!!) performing with the local AmDram group (his Scarecrow in the Wizard of Oz and his Fagin in Oliver! are legendary and I found out after I left high school that he'd been a childhood friend of my mother.  He turned up to my mum's funeral in 2004 and was visibly upset at her death.  He passed a card to my sister and I, gave us a hug each and wished us well.  Inside the card was written a very personal message and he finished "With Love, Sir".
family meme music nostalgia photograph school writing