January 24, 2010
First of all, let me tell you how EXCITED I am to be tagged in this Shiny Happy People Meme.  It's my first tag EVER and now I'm very nervous as to what to choose because there have been so many good Shiny Happy People meme's before this one.


For my readers who don't know what a "meme" is, I'll try to explain.  Well, Wikipedia explains that it is pronounced "/ mi:m/" (to rhyme with 'cream' - although this is wildly disputed in Blogland, isn't it Paula?!) and it's like a game of "Tig".  Someone posts a short blog and chooses a subject.  They then "tag" (or name) five other people to post their own short blog post within the theme.

So, onto the meme in question.  Paula at "Battling On..." tagged me for this one.  It was originally started by Rosie Scribble and the rules are:

1.  Name a song that makes you happy - a song you would listen to if you needed a sudden injection of happiness;

2.  Post an image that makes you smile.  It can be anything - a silly photo, an image taken from the internet, anything at all that puts a smile on your face (and isn't too rude!).

As I've already mentioned, I'm rather excited because (a) I'm quite new to this blogging lark and (b) I've been dying to join in with this one because I've really enjoyed seeing everyone's photos and listening to the music that they've chosen.  However, now it's come to actually choosing my picture and music I realise that there's so much I could post and it's all a bit personal.
Here is the picture that makes me smile: 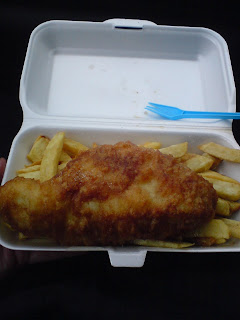 This is a portion of fish and chips from the best chippy in Lancashire - Bispham Kitchen (14 Red Bank Road, Bispham - at the end of the Illuminations).  This chip shop has been open for years and, when I was a child, we always bought chips from here after driving through Blackpool Illuminations.  My sister and I would wind our car window down slightly and hold the chips out of the window to cool them down.  I've now carried this tradition on with my children although we use any excuse for a day trip out to Blackpool just so that we can go and buy fish and chips.
Here are my songs:
First is Kissing With Confidence by Will Powers from 1983.  This used to be a favourite of mine oh so many moons ago and it was played on the radio recently.  I knew every single word even though I hadn't heard the song for ages.
Second (yes, I'm having two because I'm greedy) is the Flash Mob organised by Oprah last year for her 24th Anniversary.  It features the Black Eyed Peas and their song "I Gotta Feeling" and a lot of dancing.  This video never fails to make me smile.
To carry on this meme on I tag:
Rebecca at Celestial Motherhood  (@CelestialMotherhood)
Sarah, aka Bliss Bubbley (@BlissBubbley)
Debs at Debs Daydreams In The Shed (@DebsCarr)
Sian at Mummy Tips (@mummytips)
Emily at Maternal Tales From The South Coast (@maternaltales)
blog family meme music photograph