So, at the end of very fantastic show, which you can read about here, there are always the bloopers and the best bits aren't there?  Here is my MAD Blog Awards version of just that (in no particular order):

Walking into the venue, past the rolling camera with John, Geekdaddy, filming the arrival of all the guests, me doing that 'dipping down to disappear from view of the camera' thing and our first conversation being, "You, if anyone, shouldn't be bothered about being on camera!"  I have no idea what he is on about.  *ahem*

Sandy Calico's slightly inebriated announcement of the winner of the Best New MAD Blog: "Mammy WooooooOOOOOOOOOOO" as which she will be forever known from that moment forward.

Sally's increasing impatience when the general chatter noise was louder than the actual main microphone (you lot are a HARD audience, by the way!).  Always starting with "Guys?..."  You know it's serious when she starts with "Guys?..." 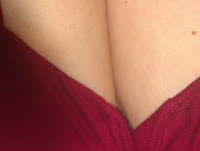 My photo of Pippa's cleavage being used in the Live Blog caption competition. And I especially liked the "that's a wind up - it's really legs" and "is that bum cleavage?" from my non-blogging twitter followers who put up with an awful lot from me.

The dance-off from all the Most Innovative nominees after Ruth won and played our video.

Me presenting the "Best Post of the Year" award and starting with, "This is my consolation prize after not winning my category.  I've always wanted to be invited to the opening of an envelope".  I was quite drunk by this point.

Going up to present Sally & Jen with their Thank You gifts and Sally refusing to hand me the microphone saying "The talking stick is not with you!" (a #madblogawards twitter stream joke from earlier in the week).  I repaid her by getting everyone to sing a chorus of "For She's A Jolly Good Fellow" (thanks for that everyone).

Filming an X-Factor pod version of "99 Red Balloons" with Claire and Liz, being the only one singing, sounding very Northern and out of tune and then cringing whilst watching X-Factor on Saturday and Sunday night in case it came on during the adverts.  (Note to reader: Turn the sound right down before clicking on that singing link)

The awful photos of me which can be found on the MAD Blog Awards Facebook page and tagged with my real name all over the World Wide Web now *sigh*  Which makes me ask why, when we all have eyes, nose, mouth and hair, what makes some of us more photogenic than others?  There may be a blog post coming soon about that.

Being blamed for dropping the C-bomb down the hotel bar when it was, in fact, Heather.  I know it wasn't me because I had collapsed and was being groped by Marylin.

Being upgraded to first class on the way home by Sally (THANK YOU!!).  Yes, the seats are slightly bigger and more comfortable but the coffee is still crap and the toilets are just as disgusting.  And I never got my free biscuits. 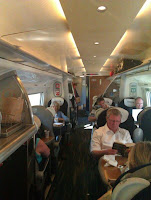 Almost sitting with Clive Anderson in first class (he's there... on the right... towards the back... next to the window... you see him?).  He seriously doesn't know what a narrow escape he has had.  I would have had him comparing a Euston-to-Preston version of Who's Line Is It Anyway where I would have played the Josie Lawrence role and ended up singing the winners names of the MAD Blog Awards out to him. You can read more about that by clicking on the photo which takes you to my Facebook page.