December 31, 2011
Should we be reflective of what has happened on our blogs over the past twelve months or should we be look forward into the future?  I believe that whatever you have written is part of the building blocks of your blog and acts as the foundations.  If you hadn't written any of those posts, you wouldn't be where you are now.


I wanted to create an infographic here to show you the achievements of this blog during 2011 but, when I looked at the facts and figures, it didn't really reflect how I felt about how I had truly grown.  My top ten posts of the year (ranked by page view) are below and, whilst I am proud of the effect that they had in the online world, they don't reflect my own personal favourite posts.

Visitor figures were through the roof during 2011 and it's something I strive to increase.  I have readers from all over the world with many of them returning to read more and some of them from countries so far reaching

that it amazes me how the world is connected digitally.  Also, the fact that readers are using both 'traditional' computers/laptops and mobile devices to read the content here.
But what really matters to me is that I can write anything and there are always willing readers out there, commenting on what I have written, praising my tutorials, critisising my opinions, challenging my point of view - all of which makes for great discussion and pushes me forward to look for new topics to research and write about.

I have been involved in a great number of campaigns this year that suit my own personal beliefs.  Healthy Eating, concentrating on breakfast with Kellogg's and Netmums, a blogger outreach campaign with Save the Children and a programme to help unfold the complexities of meningitis.  I have also been lucky enough to have been asked to review a great number of products with the help of my family.  Collectively, this is a massive confidence boost as it validates the reasoning behind using my blog as a 'voice' and an equivalent outlet to shout something from the rooftops.

But really, my main highlights of the year have to include a number external recognition programmes.  My nomination for "Most Innovative" in the MAD Blog Awards was amazing and I owe a great deal of thanks to every one who voted for me (congrats to Ruth and all the other winners).  Also, my ranking in both the Wikio Blogging Charts and the Tots100 shows that not only are people reading but sharing and linking back to my blog posts.  I've grown so much in these charts that I feel it's only right that I brag about it a bit...

Both charts are representative of over 2500 blogs registered in each of their rankings.  The charts don't actually make any difference to the content that I produce but the numbers look good...  Also, I finally received recognition for my contribution to the Twitterverse.  I remain the Twitter Queen at least until June 2012 (and 18 month reign isn't too bad, is it?). 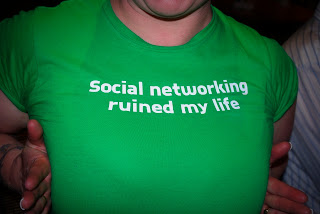 A personal achievement for me is standing in front of 400 people at Cybermummy and reading out my blog post that detailed my daughters battle with Cancer.  I had never read it out in front of anyone before, had never really 'promoted' it (although it did spark the very emotional 'Cancer - Your Story' series) and I managed to get almost all the way through it without breaking down.  It took me over 18 years to pluck up the courage to write that post and I'm very grateful that people accept it for what it is.  Cybermummy also provided the chance for Tara to take the best photo of me EVER.

I have enjoyed writing my blogging and social media tutorials and have a few more in the pipeline for 2012.  I'm also in the process of writing an e-book about blogging and social media but that's a slow burner for the time being.  I have tried to hone my creative writing skills with the 100 Words series and I've been so proud of being part of the Blognonymous team, of which the concept continues into the future and remains the same six founding blogs.  There is also so much more that I have not mentioned but it's been an honour to have you here with me through the last twelve months.

I'm not sure what 2012 holds.  Who does?  More of the same, some new ideas, maybe starting a new blog to try out some creative writing, sharing a journey through photography thanks to a new camera for Christmas (my first 'proper camera'), finding more time to read (and share what I'm reading and look out for recommendations) after becoming the proud owner of a Kindle, maybe a venture back into my Open University studies, speaking at both CybHer12 and Britmums Live and taking on whatever else gets thrown in my path.

That's the thing about blogging and the way I write my blog.  Not having a structure means so much scope and I can do things MY WAY!