Race For Life - The Second Chapter

July 14, 2013
After taking part in the Race For Life in Blackburn in June I was approached by Scottish Power who wanted to do the same at the Race For Life being held at Heaton Park in Manchester, in exchange for a £200 donation to my existing fund-raising pot (see the end of the post for donation details).

So I negotiated an extra entry (my sister-in-law, Trish) and Team O'Hara was born.  I carried on with my training - I've been power walking a great 5K route near home with the dog and for anyone thinking about taking part in the Race For Life or just wanting to get fit, the 5K is a great distance - take it from one who is now hooked!  I also had a serious think about who I was going to "Race For Life for..." because I did it for Rachel last month and there are other family members (my father-in-law, Mick, for one) and friends that I could run for but I always come back to my own thoughts about my daughter's battle with Neuroblastoma. 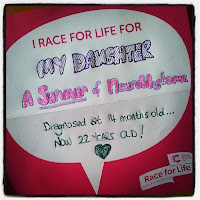 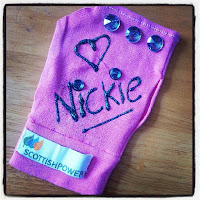 This morning I wrote my sign and blinged my High 5 Challenge glove and headed down to Heaton Park.  During the car journey down to Manchester, the first song that came on the radio was a Right Said Fred number (and it's much ruder than I remember!).  Trish and myself had a bit of a giggle to ourselves.  It's a private joke that has been ongoing since for as long as we've known each other (23 years) but it was a fabulous start to the afternoon.

Once we were at Heaton Park, we met up with a few other bloggers who were being supported by Scottish Power and then headed off for the warm-up and the Cancer Slam Dance.  Knowing how slow the walkers start, I thought it best to begin the event with the joggers and it wasn't a bad move.  Trish is a faster runner than me so we started together and then she moved off at her own pace).  It was a HOT day and the course was much hillier than I thought it would be so my pace was a bit slower than I'd hoped.  However, I finished in 53 minutes and I'm proud of that.

Here's what Trish had to say about why she was taking part in the Race For Life:

In the past few weeks I have done three things which were a 'first' for me:My first Robbie Williams concert, my first LFC v PNE match at Deepdale and then today, my first ever Race For Life.

I tend to run for fun; I'm not a good runner, I just run at my own pace. When Nickie asked me to do the Blackburn Race For Life my work commitments meant that I couldn't so when the Manchester RFL opportunity came along I couldn't wait to join in.

I have had people close to me who have passed away because of cancer - my late father-in-law, Mick, my favourite uncle, David and my uncle Leo, to name but a few.  I could have raced today in their memory but I knew that they would be in my thoughts during the run.  I  wanted to run for the survivors, including my niece, Rachel.    But mainly, I want to get men to check their boobs.  I have a dear friend, Phil, who got the all clear from male breast cancer earlier this year.

So, yes, I ran today's race for the survivors, the fighters and those who are no longer fighting because they can't.  And I will be running more Race For Life's in the future! 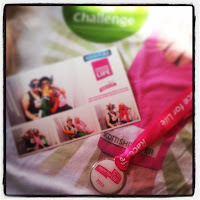 It was an absolute honour to experience the day with Trish and what she hasn't told you is that she finished in a FABULOUS 29 minutes!!!  On our way home, yet another musical treat came on the radio (see below) and it was the perfect end to an emotional day.  I have some 'team' ideas that I am going to hone before next year's races as I'm hoping to participate in the Preston and Blackburn Race For Life events next year.  My own personal challenge is to improve my time and be jogging part of it.

YOU CAN STILL DONATE!

I have to say THANK YOU  again to everyone who as already donated.  I'm continuing to collect donations for Cancer Research UK and my Just Giving page stays open until September.  By racing with Rachel in June and with Trish today and the kindness of people in my network - both in 'real life' and 'online' - I have already broke through my initial target of £500 in donations.  I would love to be able to hit £1000 before the page closes. 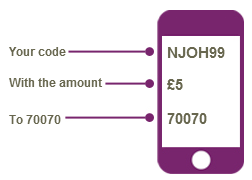 If you're in the UK and pay tax please do not forget to hit the Gift Aid button - it doesn't cost you any more but ensures that the charity can claim the basic rate tax on every pound donated.  Read more here.  The text is free through the Vodaphone JustTextGiving service. Read more here.  You will be given the option to select Gift Aid in a follow-up text. 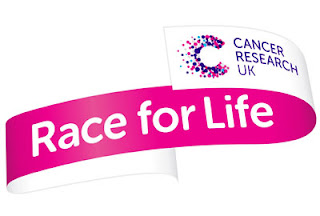 Scottish Power paid for Team O'Hara entries for the Heaton Park Race For Life in Manchester and provided money towards travel expenses.  They also very kindly donated £200 to Cancer Research UK as part of their blogger programme.  For more, please see my disclosure page.