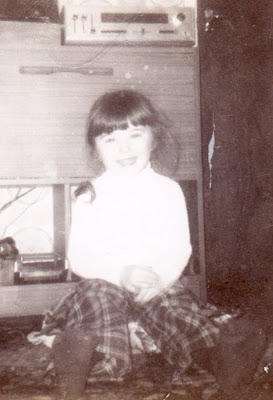 This picture of me was taken in 1975 in the through-front-room of our house in Freckleton.  I have a vivid memory of this picture being taken because I had just become a big sister.


For me, what leaps out from the picture is not my huge smile or my tartan trousers (they were my favourites) but the cabinet which is behind me.

This was an integral piece of family furniture for many years.  The radio and record player sat on top, the records were stacked neatly inside the drop-leaf cupboard and the portable cassette player with microphone was stored on the bottom shelf.  This was the same cassette player that my Nana recorded "Kisses For Me" by Brotherhood of Man from the television so that she could write the lyrics out for me (as mentioned in the very first Soundtrack To My Life).

It wasn't an expensive piece of furniture or a family heirloom in the traditional sense - it was veneered; think Ikea-style furniture for the 1970s - but it was a central part of our family life.  I can't remember when the cabinet was no longer part of the furniture in the house but it was replaced by a Welsh dresser which ended up in my house after Mum died.

The Photo Gallery theme this week is "Into The Archives" which gave me an opportunity to have a look through some old photos that I haven't used on the blog yet.   I'm now off for a look at all the other entries to wallow in some nostalgia.
1970s gallery nostalgia photography The Gallery